Depth should not be an issue at running back at Iowa State for years to come.

Paul Rhoads and his staff recently added another dangerous back to their Ames arsenal in Rob Standard, a 5-foot-10, 185-pound halfback out of Chaminade high school in St. Louis.

“He is a touchdown machine for us," said Standard’s head coach Doug Taylor. "He’s a great rusher. He isn’t the biggest kid at about 185-pounds, but having said that, we run the ball between the tackles a lot. He is a hard-nosed kid between the tackles but he has speed to get outside. He can get to the edge also. He is kind of a big time two-dimensional threat. You can’t play him one way cause he’ll burn you the other way.”

Standard’s high school, Chaminade, lost their first game of the season last Friday, 38-35 to Christian Brothers. Chaminade is now 5-1 this season and ranked third in the area by the St. Louis Post Dispatch.

Taylor told CycloneFanatic.com that his program doesn’t run a spread offense but that he believes Standard will fit in well to Tom Herman’s system at Iowa State.

“He will be a kid who will fit into that offense very well," Taylor said. "He catches the ball really well. We aren’t a big passing team. We probably run it 70-30 and we’re more of a play action type of team. When he is one of our receivers, he is really good at catching the ball.”

“He is a patient runner. In this day and age with the zone runs and everything, he really knows how to use his linemen and take his time. He has that explosive step. He decides where he wants to go.”

Don’t be surprised to see Iowa State try Standard out at kick or punt return, much like you’re seeing from Shontrelle Johnson as a true freshman this season.

“We try not to put him on the field in punt return or kick return situations too often but the times we have, he is devastating in those spots," Taylor said. "As a young guy coming up, that might be a part of the game where he can be outstanding also.”

Standard chose Iowa State over an offer from Nebraska. Chaminade will travel to Webster Groves on Friday. 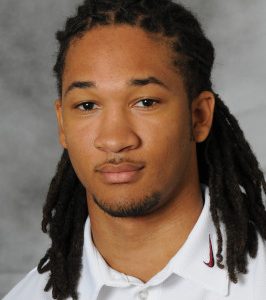