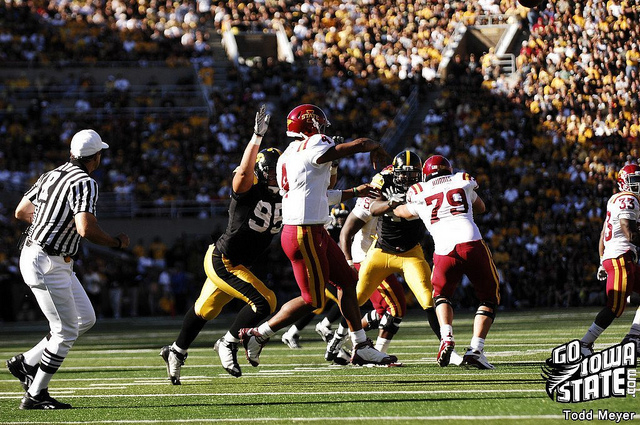 Rush defense and a lack of offensive execution.

It is pretty safe to say that those have been Iowa State’s two major weak spots during the first three weeks of the 2010 football season.

Iowa State’s defense has given up an average of 231 rushing yards per game, a stat that ranks them 112th in all of college football. The most glaring statistic in my mind is the  fact that Iowa State’s scoring offense currently ranks 103rd , with an averaging 18 points per game.

Let’s start with the offense. After sitting through Paul Rhoads’ Monday press conference and Big 12 teleconference, the cure to this issue is pretty much a no-brainer. Iowa State needs to produce more big plays on the offensive side of the football.

“It is hard to put more points on the scoreboard without them,” Rhoads told national reporters on his weekly teleconference. "We have had a lot of long fields that we have had to drive this year. Our style has been one first down at a time, with very limited to what we refer to as ‘explosive plays.’ If we are going to score more as an offense, we need to get more explosive plays.”

The unit has had their fair share of opportunities too connect on those big plays too. That’s where a lack of execution comes into play.

“We had our shot Saturday and we didn’t deliver,” Rhoads said. “We had Alexander Robinson wide open down the middle. We had Darius Darks wide open on the outside. Those are plays we have to hit and maybe break one or two.”

“He got slowed up a little bit but he was wide open and I just missed him,” said quarterback Austen Arnaud on the overthrow.

“That’s a ball that is a tougher throw than people think,” said Rhoads. “You’ve got a MIKE linebacker who is running and chasing. You can’t make the ball flat. You have got to put some air on it. But it is a ball that has to be thrown accurately.”

Now, onto the rush defense. I’ll start with a saying that the Iowa State football program likes to live by.

I think that is the case with the rush defense. Keep in mind that over the last two weeks, Iowa State has gone up against Daniel Thomas, Adam Robinson and Jewell Hampton. I’m not saying that the Cyclones rush defense is good. I just don’t think they are as bad as they have looked on the past two Saturdays.

“We knew that we were going to have problems early in the season because we are young and inexperienced,” Rhoads said. “We are not loaded with star players. The defensive line falls under that. We haven’t tackled great but we haven’t talked poorly in three games. The difference in missed tackles this year is when we’ve missed them, there has been a lot of yardage after those missed tackles. When you face running backs like Daniel Thomas and the ones you have at Iowa, they can exploit you in a hurry.”

Northern Iowa is currently ranked 11th in the FCS division in rush offense, averaging 238 yards per game. Their starting running back, sophomore Carlos Anderson has run for 239 yards and a touchdown in two games this season. Junior quarterback Tirrell Rennie is also a good one. He’s run for 228 yards on his own, accounting for one touchdown.

Still, Northern Iowa has five new starters on their offensive line this year.