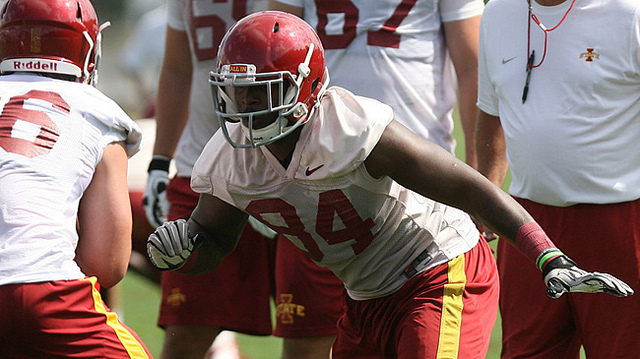 AMES — The tone in Paul Rhoads’ voice was somewhat uncertain when it came to discussing the status of Iowa State’s senior tight end Ernst Brun after Tuesday night’s practice.

Brun, who was forced to leave Iowa State’s season-opening loss to UNI early due to “body cramping,” did not practice during the team’s open week. Rhoads confirmed that Brun practiced on Sunday and Tuesday this week (Iowa State takes Monday off) but that was about it.

“He did not look full of energy today, quite honestly, in practice,” Rhoads said. “He’ll practice all week long and we will get plays out of him. With that in mind, I am aware that we’ve got three pretty good tight ends. We won’t miss anything in our offense with that being the case because of (Ben) Boesen and (E.J.) Bibbs.”

Bruns’ injury is a mysterious one. Rhoads was asked what the difference in these “cramps” is compared to others, which would lead it to be such an issue leading up to the Cy-Hawk game.

“Fully medical,” Rhoads said. “The blood work numbers and precautionary measures not to push him through that. To me, it’s a mark of our program.”

To reiterate, Rhoads is expecting Brun to play on Saturday evening against Iowa (5 p.m. kick on FS1), but how he progresses over the next three days will likely dictate how much.

“We’ve got to hold up,” Rhoads said about his limiting Bruns’ reps. “It’s caring about our kids.”

One Knott watches another

Last year, Jake Knott clinched the Cy-Hawk Trophy with a clutch interception in the closing minutes of Iowa State’s 9-6 victory in Iowa City.

This year, Jake led off Cy-Hawk week with a Monday Night Football NFL debut for the Philadelphia Eagles, who defeated Washington by a 33-27 final. Knott recorded one tackle and contributed to a critical onside kick recovery in the fourth quarter.

As you’d expect, little brother Luke, who will start the first game of his career on Saturday for Iowa State, watched every single play.

“It was awesome,” Luke said. “I sat down on the couch from the start to the end. I’m sure my roommates got pretty annoyed by me. Every play he was out there I was like, ‘Get him Jake get him!’ Hopefully he can just keep it going.”

Because of his football and class schedule at Iowa State, Luke said that it might be hard for him to get to any of Jake’s games this season but he has a few dates circled on the schedule.

“Hopefully if we have some downtime (in December) I can get out there on a weekend or something for a few days,” Luke said. “Hopefully he is playing in January. That would be pretty awesome too.”

Lost in the hustle and bustle of Cy-Haw week has been a position change that Paul Rhoads announced to the media on Monday. Redshirt freshman Damien Lawry has been moved from cornerback to wide receiver. Early indications are showing positives from the move, but they are just that, early.

“He can really, really run,” offensive coordinator Courtney Messingham said. “To this point he has shown that he has good hands. If you have those two things going for you, you at least have a fighting chance.”

Rhoads made a point to go check out the wide receivers during Tuesday’s drills and said this when asked about why he moved Lawry to offense:

“Speed and quickness and he hasn’t disappointed,” Rhoads said. “He was doing these drills and looked like he had been doing them for the entire length of training camp. A position move that is fitting to his quickness and speed.”

Rhoads noted that Lawry played both offense and defense in high school so the position is anything but foreign to him.

“A lot of those guys never give up the affinity for having the ball in their hands.”

Messingham said that as of now, the 5-foot-10, 169-pound Lawry is playing slot receiver, but that fact could change in the future.