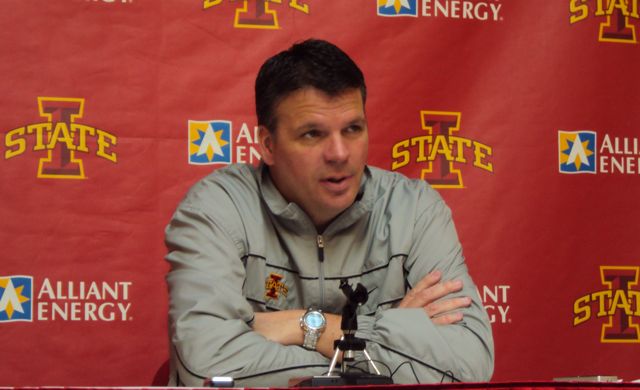 Greg McDermott met with members of the media earlier today to discuss the state of his Iowa State men’s basketball team. Among today’s hot topics were Saturday’s loss to Colorado, a look ahead to Missouri and the future of Marquis Gilstrap at Iowa State. Read a complete transcript from today’s press conference right here at CycloneFanatic.com.

After reviewing the Colorado game, we really did a whole bunch of good things in that game. Offensively, we moved the basketball. We got the shots that we wanted for the most part. We got to the free throw line. We did not turn the basketball over. I just thought that our execution, when we needed it was as good as it has been in some time. We rebounded the basketball. We kept them off of the free throw line, which is always important against Colorado because of the way they play and the way they try to spread you out. The unfortunate thing is that Cory Higgins hit a couple of shots early. One of them was off of a mistake by us and another was a tough post up, a fade away in the post. Once he got started, we really had a hard time slowing him down. You have to tip your hat to him. He made a lot of great plays.

Casey Crawford was really big in the last six minutes of that game for somebody who hadn’t scored much throughout the course of the year. He hit a couple of 3-point shots but also made a couple of plays around the basket, one offensive rebound in particular that was huge. We have got to try to take the positives from that and apply it to our practices here over the next couple of days as we prepare for a Missouri team that really has a lot to play for. We played a great game against them the first time, despite not shooting the basketball well. We had an opportunity to win that game in the last three or four minutes. There are a lot of positives that we can take from how we defended them the first time around and carry that over into the game tomorrow night.

How does losing Justin Safford impact their team?

GM: Safford and Bowers and Ramsey are all similar in the sense that they are versatile. They can switch a lot of screens with all three of those guys. They all can play outside and in. Steve Moore, who will play more now because of the injury to Safford, is more of a true center. He plays more around the basket. He’s not as comfortable facing the basket. He’s probably not quite as gifted on the perimeter defending, when they switch some ball screens and switch onto guards. Where it hurts them is really their depth in that front line. But other than that, they played some good stretches in that game against Kansas State. They defended them very well.

Marquis played very well on Saturday. Can you talk about his play?

GM: He made great decisions. I thought that the pace of his play was better. Sometimes Marquis gets in a hurry. He puts that head down and is going to the rim, regardless of if somebody is in his way or not. He made good decisions sometimes stopping and shooting pull-ups. He kind of slid around the defense a few times for layups and he had four assists. That is something that we have constantly been working with Marquis on, to take advantage of his ability to get it in the paint and create things for his teammates. He did that on Saturday as well as he has all year.

It is Senior Night. Marquis will be honored. How do you approach this as it could also be Craig’s last game at home too?

GM: In my experience, you honor your seniors on Senior Night. If they aren’t a senior, then you don’t recognize it. If at the end of the day, when Craig sits down with his family and decides his future, if he decides that he is going to move onto a professional career, then we will have ample opportunities to honor him at some point when he comes back. I think that Senior Night is for seniors.

Is Marquis a pro? Do you see that in his future?

GM: He is a professional at some level. Making it in the NBA is so much about being the right fit at the right time. Whether he gets that opportunity, I don’t know. He could potentially have some opportunities to go to camp with some people. It is then a matter of how he plays. What he did on Saturday was very impressive. He showed his versatility and he made good decisions with the basketball. He still rebounded it and defended it very well. I think that there will be opportunities for him sometime down the road.

Why didn’t Craig shoot any free throws against Colorado?

GM: That is a good question. He got 16 shots and I think that he only took three 3-point shots. A lot of his shots were within 10 feet of the basket. They came after him with some double teams some. He missed a few shots down deep that I thought he normally makes and he created some contact, which he normally does and sometimes they get called, sometimes they don’t. I didn’t feel like it was because he was any less aggressive than he was against Nebraska for instance. I thought that he made some aggressive plays from the start of the game.

What is your opinion on how Jamie Vanderbeken is doing?

GM: He is getting better but it is still a process. He has missed so much time and there have been so many injuries. My hope is that when the season is over and we get through spring break, when we start doing some individual workouts in April, that he’ll be close to 100 percent so that he can go all out on those. We still have to pick and choose what we can do with him. Obviously, his conditioning isn’t great so getting him through a whole practice is a little bit of a challenge. His attitude has been great. His approach has been good. He has done what he has to do to get himself back healthy.

Where are you at in the appeal process with Marquis?

GM: It has been filed. Now we just wait. As I’ve mentioned before, there is a lot that goes into putting that together. Collecting information that dates back to four years ago can be somewhat of a challenge, especially when you’re not there. I think that we have it put together as good as we can at this point in time. We will see what they come back with.