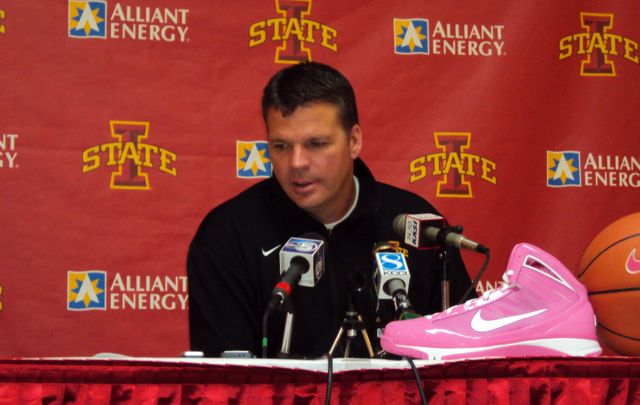 As he does every Monday, Iowa State’s men’s basketball coach Greg McDermott met with members of the media this afternoon. Here’s the complete transcript of what went down.

Opening Statement “Missouri presents some challenges that we haven’t seen yet this year. They are just a very capable 3-point shooting team, with a number of guys. Not often do you have I think seven guys who essentially have made one 3-point shot per game in conference play. That can be difficult to guard. One of them is not J.T. Tiller, who is on the floor a lot, who can take the ball to the basket, who really is the straw that stirs their drink. He is as tough of a players as there is in the league. He is as good of a defender as there is in the league. He’s someone who I have always been very impressed with and have a lot of respect for. They come at you with a lot of different guards, with Taylor, English, Denmon, Dixon coming off of the bench. Their big guys in Bowers and Safford are shooting it good enough that it stretches the floor and allows them to really create space because they have so many different guys that can shoot it. Having said that, it is still their defense that I think separates them with their ability to turn you over. I think that they are leading the nation in turnovers forced per game and steals per game. That is where we have to zero in on and make sure that we don’t make those mistakes. I felt like last year, we handled the press okay but our turnovers came in the quarter court. Some teams fall into the trap of relaxing, once you get across half court, thinking that your work is done. Often times, that is when they do some of their best trapping and rotating is in the quarter court. We had a good workout this morning and we will need another good one tomorrow before we head to Columbia.

GM: We have to control the tempo somewhat. I don’t think we are going to be in a hurry to grab the ball out of the net, get it inbounded and hustle it down on a made shot. We certainly need to take advantage of opportunities in transition on missed shots because I think that there are some opportunities to get some easy baskets there. On made shots, I think that we have to take our time. Hopefully, we can force them into a situation where they aren’t scoring early in the shot clock, where they have to take some time, make a few passes because obviously, they prefer to shoot it quick. We have got to try to make it so that they are playing offense a little more often than they’d like.

Where do you sense the team’s confidence level is right now?

GM: I think that it is still okay. There were a bunch of guys in the gym shooting yesterday, getting workouts in on their off day, which is always a positive sign. Practice today was enthusiastic. They were focused. Obviously, when you play Missouri for the first time, there are a lot of new things that you put in to attack their pressure. They needed to be focused. We did a lot of good things on Saturday on both ends of the floor. We matched Kansas State’s aggressiveness as well as most teams that have played them this season, with what we were able to do on the backboards, keeping them off of the free throw line and getting there ourselves. Those really were statistics that I thought would allow us to have a chance to win the game. We just had some breakdowns about two minutes into that second half both on the offensive end with some ball handling errors and some decisions that we made with passes that led to easy baskets and turned the momentum of the game. I felt like up to that point, it was ours.

How hard is it to transfer those positive things over when you are playing a team like Missouri, who is so different in terms of style?

What have you learned by playing them over the years?

GM: You have to be able to attack the pressure. If you are not aggressive with your attack, it just fuels the fire. You have to pick your spots and attack it to try and score on it when you can. Having said that, what they want you to do is get in a hurry. They want you to fly down there and take a quick shot. That feeds right in to how they are going to play. You have to be disciplined enough to understand when it is there and when it is not. When we have done that, we’ve had some success with them. When we have gotten sped up, that’s when the turnovers have happened. As I mentioned earlier, in watching our two games against them last year yesterday, I just felt like we made more of our mistakes in the quarter court than we did against their full court pressure.

What are some things that have surprised you so far about the Big 12?

How many NCAA Tournament teams do you think the Big 12 will have?

GM: I think that six is a lock, unless something crazy happens. I don’t think that there is any reason that we can’t get seven.

GM: I don’t think that you ever know what is about to happen. I don’t think that is the case at all. It is just about everybody understanding their responsibilities and then executing them. As soon as one person is not on the same page with that, something bad can happen. It can have a devastating effect on the outcome of a game. That stretch, as much as any that we have played all year, certainly proved that point. To our guy’s credit, we had a chance to fold the tent and we didn’t. We got it back to four points with six minutes left or whatever and forced the timeout. To Clemente’s credit, he hit a big shot out of that timeout that really, once again, zapped our momentum. It takes a great effort for 40 minutes on both ends of the floor to beat a top 10 team. We just weren’t quite able to do that.

With Chris Colvin playing better every game, has that taken any pressure off of Diante Garrett?

GM: I think so, simply because Diante doesn’t have to have the ball in his hands all of the time. That is a lot of pressure. Diante has done some good things off of the ball. I thought that his decisions on Saturday were really good. Defensively, he continues to make some strides. Chris is getting better every game. He is getting better every practice. He’s playing with more confidence. I think that he has an understanding of what we want him to do and he is executing that. Since he came back off of the suspension, his assist-to-turnover ratio has been much better. He is picking his spots to shoot the basketball. Most importantly, Chris has a way about him of getting his teammates easy baskets. Those easy baskets can really fuel the confidence of his teammates, Craig in particular. I think that Chris is a big reason that Craig has bounced back the way that he has.

Can you talk a little bit about the difference in rebuilding a Big 12 program compared to one in the Missouri Valley, like Northern Iowa?

GM: I am not sure that a rebuilding job is any different. We were in a far different place here, when we took over to the fault of nobody. But the coaching change in itself left us with four scholarship players. You are almost starting with the death penalty, essentially to begin with. We didn’t have anybody left. You have to piece that together, the best that you can. I probably wouldn’t have turned it around at Northern Iowa if Ben Jacobson would have left after his sophomore season. Or, if Eric Coleman leaves in the middle of his junior season. I don’t know. The pieces that we brought in to try and get this thing fixed, we haven’t been able to keep together. That is the biggest difference. We were able to maintain the consistency in that program at Northern Iowa. As a result, we got that turned around. We haven’t been able to do that here.

Northern Iowa has stayed consistent. How much of that had to do with it being a seamless transition?

GM: Anytime you have a coaching change, you run the risk of what happened here when I took the job, that some guys are going to make the decision to leave or that some recruits are going to make the decision not to honor their letters of intent. It takes you a while to dig from that because Coach Jacobson was involved in recruiting that class of Koch and Eglseder and Dunham and Kwadzo. That was seamless in that those four guys kept their word and went to Northern Iowa, just like I told them to, and as a result, they have been able to maintain a level of excellence.

Do you feel like you were behind the eight ball, in that respect when you took this job?