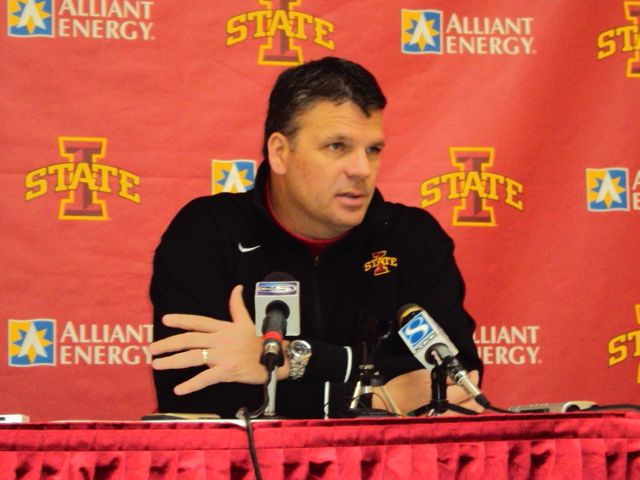 Greg McDermott met with members of the local media for his weekly press conference today. Below is the complete transcript courtesy of CycloneFanatic.com.

After watching the A&M game on tape, my initial thoughts on the way that we competed, well I was right on in that regard. I thought that our guys played hard. We put ourselves in a position to win, had some decent looks at the basket that we couldn’t get to go down. And then there were times that we forced some. As I think back going through and scouting Texas A&M, they force a lot of teams into those shots because they are very solid on the defensive end of the floor. I was proud that we put ourselves in the position to win. But disappointed that we didn’t execute when we put ourselves in those positions and had an opportunity. Like with any other game, regardless of the outcome, you have to put it behind you as quickly as you can, learn from it and move on to the next opportunity. That is Nebraska. Nebraska has struggled in conference play as well. As you look at a few of their recent games in particular, their game at Kansas, their home game against Baylor, their game against Kansas State…those games were competitive right to the end. This is a team, like ours, that hasn’t quit, that is going to continue to play hard and I expect to get a great effort out of them on Wednesday.

Q: You guys have been just right there so many times, specifically the last few games. What is it going to take to finally get your team over that hump?

GM: Part of it is cleaning up a few of those things that put you in that place to begin with. As I told the guys in practice today, when you are talking about a four-point game, it is one offensive possession and one defensive possession. One stop we didn’t get and one basket we didn’t get. That turns the game around. It’s not like we have to reinvent the wheel. We just have to be more consistent with what we do and understand it. We don’t know which possession is going to be that difference maker. I think that it is human nature that there is a little bit of frustration. These guys are young and they are here to win, just like we all want to have happen. Today’s practice was good. I thought that their energy was good. Their attitude was good. They worked hard. We are going to have to start making some plays when the game is on the line. We have been able to make the plays to get us back in a game when we have fallen behind. We have to make those same plays when it is a one possession game.

Q: After Saturday’s game, you talked about changing things up somewhere along the way to maybe help with the 3-point shooting. Craig said today that instead of taking 200 shots a day, he is taking 400. Have you done anything like that?

GM: You have to change something when you are going through a slump. Some guys are going to get in and shoot it more, but sometimes, especially this late in the season, you need to take a day off and give your legs a rest. I think that Craig was away from the gym yesterday, which was good for him. We are asking him to play a lot of minutes. He has had some shots that are going halfway down but popping out. I just feel like just making a couple of shots in a row, would bust him out of the slump that he is in. When I look back at his shots from last year, the same shots that he has missed during this stretch, are the same shots that he was making a year ago. It isn’t like his shot selection is any different. There are maybe a couple, here and there where he is forcing the issue because he is trying to help his team win. He is trying to make a play. He can’t put that weight on his shoulders. For the most part, of his 16 shots, 13 or 14 of them were shots that he took when he scored 42 on Kansas. It’s not like he is taking shots that are different than what he took in the past.

Q: Would you rather see a tomahawk, crowd exciting jam or somebody lay it in?

GM: I like two points. Marquis made a great defensive play on the one that you are referring to. I don’t think that Marquis had missed a dunk all year so if he makes that obviously, the crowd is into the game. It started with a great defensive play, a hustle play on his part. Fortunately, his teammate Justin Hamilton, hustled and didn’t assume that just because Marquis hasn’t missed one all year, that this one isn’t coming out. We still got the two points.

Q: How is the LaRon Dendy situation going?

GM: He and I met yesterday again. We talked through some things. I like the progress that he is making. We will gradually work him back into the lineup.

Q: What does Nebraska do differently now compared to the first time you played them that might make you game plan a little differently?

GM: They just continue to compete. Doc always does a great job defensively, trying to take away your strength. He has come after Craig before and that was when Lucca Staiger was in the lineup. My guess is that he is really going to come after him now and try to get it out of his hands. Ryan Anderson, I think has made 11 3-point shots, if I’m not mistaken in the last two games. He is playing at a very high level right now, shooting the basketball. They have had games where they had trouble scoring points. It certainly wasn’t the case at Kansas State where they put 87 points on the board against a very good defensive team. They are going to grind it. They are going to try to establish an inside game. Defensively, they do a terrific job of trying to keep you out of the paint. They are very similar to Texas A&M in that regard. They are going to make you beat them with jump shots.

Q: Has anything surprised you, in general, about college basketball this season?

GM: I don’t watch much college basketball outside of our next game. But obviously, our league is really strong. I can’t imagine that there are too many teams who will be that excited about playing us or Nebraska in the first round of the conference tournament. Right now, we are the 11th and 12th place teams. Both of us are dangerous. We have played in a lot of close games this year. We have come up short. I don’t see a lot of difference between our team and the Texas A&M team that we just played. It is going to be a possession here and a possession there. They have found ways to win those close games. We have found ways to have them go the other way for us.

Q: Do you feel like your guys are feeling pressure?

GM: You know, possibly at times. I don’t think it is because they are selfish. I think that it is because the are trying to make a play for their team. We are struggling at scoring. If it has been a few possessions since we scored, they want to take it upon their shoulders to make a play and try to get their team back in it. You need some of that but you also have to understand that in those situations, most of the time than not, you also have to make the extra pass, trust your teammates. In particular, in that second half against A&M, nobody really had it going offensively so even when we made the extra pass, it didn’t seem like we could knock a shot down. I can think of an extra pass that Marquis Gilstrap made to Scott Christopherson in the corner. Quez turned down an open 3-point shot to Scott who was more open and the shot didn’t go in. When things are going your way, that extra pass turns into a basket. When things aren’t, it seems like the ball doesn’t go in for you.

Q: Is your team playing their best defensive basketball of the season?

GM: I think that they are. As you look at our defensive field goal percentage over the course of the past four or five games, it has been pretty good. That’s why we have been in games and had a chance to win. As I have talked about before, earlier in the season, we were scoring 80-plus points a game but we were giving up some points as well. Our field goal percentage on defense wasn’t as good. We have had to retool some things and change the way that we are doing some things on both ends of the floor obviously. The guys have bought into the fact that if we are going to have an opportunity to be in games, it has to be on the defensive end. 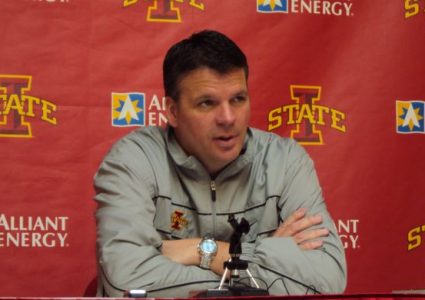