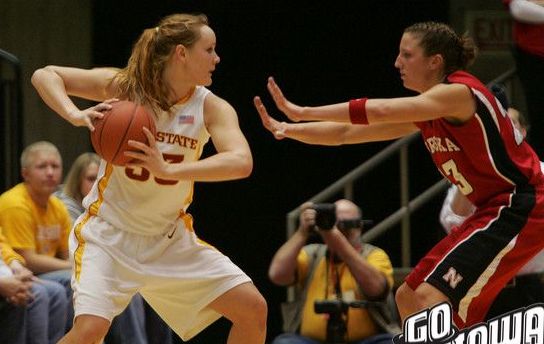 Courtesy of Iowa State Athletic Communications COLUMBIA, Mo. – The 19th-ranked Iowa State women’s basketball team raced out to a 20-4 lead and never looked back as the Cyclones picked up a 65-39 win over Missouri Sunday afternoon at Mizzou Arena. ISU was unstoppable in the first half and held on in the second half for the Big 12 road win. The Cyclones have now won six out of their last seven and have moved into a tie for second place in the Big 12 standings. Iowa State improved to 18-4 overall and 6-3 in the Big 12, while Missouri fell to 11-11 overall and 1-8 in the league. Chelsea Poppens had an outstanding performance and nearly finished the game with a double-double with 14 points and nine rebounds. Alison Lacey paced the Cyclones with 18 points, seven assists and six rebounds. She moved into third place on the Iowa State career assist chart with 485 dimes, passing Stacy Frese’s career mark of 484. Kelsey Bolte also finished in double figures for ISU with 13 points and seven rebounds. Anna Prins also posted seven rebounds. The Cyclones shot 47.2 percent from the field and was 7-for-17 from outside the arc. Iowa State was 8-for-8 from the free throw stripe. The ISU defense held Missouri to 24.1 percent shooting and a 25 percent mark from long range. RaeShara Brown led the Tigers with 12 points and seven rebounds. Iowa State outrebounded MU, 47-23. Poppens put on a show over the first 11 minutes of the first half, scoring 12 of ISU’s first 18 points. The Cyclones led 20-4 with 8:28 remaining, after holding the Tigers to just one field goal in their 11 attempts. Iowa State did not let off the gas, going on a 19-9 run to end the half. Lacey scored seven of her 10 first-half points in the midst of a 10-2 run as the Cyclones expanded their lead 29-8 with four minutes remaining in the period. Bolte scored the final four points of the half as ISU took a 39-15 advantage to the locker room. The Cyclones shot 55.2 percent from the field and were 3-of-8 from beyond the arc over the first 20 minutes, while holding the Tigers to 16.7 percent shooting from the floor, the lowest opponent shooting mark in a half this season. Iowa State held a 28-10 margin on the glass. Poppens had 14 points and Lacey had 10. Missouri came out of the locker room on a 7-0 run to cut ISU’s margin to 17, 39-22, before Bolte drained a three-pointer four and a half minutes into the period. The Tigers did not go away easy, as they held Iowa State to just 27 percent shooting from the field and outrebounded ISU 9-8 over the first nine minutes of the second half. Lacey scored six straight points for Iowa State as the Cyclones extended its lead back to 20,o 48-28. After Missouri cut the margin to 16, ISU went on a 13-0 run that was finished by a three-pointer from Whitney Williams and gave Iowa State a 63-35 lead. The Cyclones will take the week off, before returning to Hilton Coliseum for a tilt with 15th-ranked Baylor Saturday at 11 a.m. in ISU’s Pink Zone contest. Fans are encouraged to wear pink in support of breast cancer awareness.