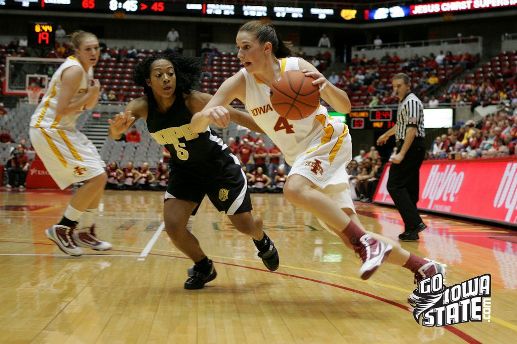 Iowa State shot 59 percent from the field and beat UNI 76-51 in front of 7,808 fans on Sunday evening. The Cyclones came out flat at the start of the game but good defense and outstanding shooting proved to be too much for the Panthers.

– Alison Lacey had a game high 23 points on 9-of-10 shooting. Lacey also pulled down 10 rebounds and dished out six assists. Once again, Lacey showed everyone that she has the ability to take control of a game by the flick of the wrist. At one point at the end of the first half, UNI had 19 points. Lacey had 17.

– Amanda Zimmerman had a career high 11-points and six rebounds. – Iowa State held UNI to just 30 percent shooting on the night, the lowest on the year for the Panthers.

-Iowa State out-rebounded the Panthers 41-26 and only allowed seven, second chance points. All of them came in UNI’s first 10 points of the game.

-Iowa State led the entire game. The closest the Panthers got in the second half was 10 points.

Iowa State came out and did what they had to do to get a victory. Lacey was the big story once again but Genesis Lightborne played 15 minutes and did very well on the defensive side. You can tell she is still a little rusty on the offense. Chelsea Poppens was in foul trouble for a lot of the second half and to have Genesis step up was not only huge for this game, could be huge for the season. This was not the prettiest win, but I am sure no one will complain about it. Iowa State will now get to go home to their family and friends for Christmas and will come back on December 29th when they play North Carolina A&T in the Cyclone Challenge.