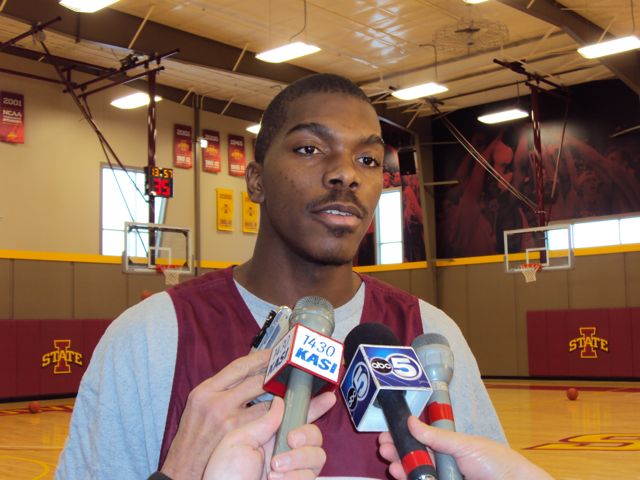 By Kirk Haaland, CycloneFanatic.com Blogger What a big win for this men’s basketball team. Breaking that ridiculous conference road losing streak at the first available juncture was huge. There isn’t a Russian judge sitting courtside to rate the “artistic expression” of the performance. The Cyclones showed their spunk in the middle 10 minutes of the first half by jumping out to a 12-point lead, only to lose it by halftime. In the second half, they were able to grind out possessions when they were most needed to get the win. Most notably holding Nebraska to just two field goals in the final ten minutes. It’s a “Steve Deaceism” meant for football, but is also true in the land of basketball that came to fruition–”you must pack a defense on the road”.

Christopherson had a crucial drive-and-dish to Brackins, Garrett hit a tough jumper off the window, and Lucca and Garrett milked the clock wisely before Staiger hit a free throw to push the lead to three. Perhaps the biggest play was the Nebraska error that Doc Sadler has fallen on the sword over. The late foul was a monumental mistake for Nebraska, after allowing so much time to tick off of the clock. But another gaffe came when they were only able to get a fade-away 25-footer to attempt to the tie the game, this after having five seconds to get the final shot. You simply have to do better than that.

One thing that was reinforced in my mind is that Greg McDermott is simply outstanding when it comes to game preparation. The thing that fans often forget is that this is essentially a constant. Sure, an in game decision could prove to be incorrect, but coach McDermott doesn’t make any oblivious decisions. The crux of this is that many times college kids don’t quite execute as instructed. A great example of that is the defense that was played at the end of the game. It’s made pretty clear in the post-game locker room video that they were instructed to foul after the first few dribbles, yet that didn’t happen. Sometimes in the heat of the moment things simply don’t register, no matter how much reinforcement is given.

I wrote in November and two weeks ago that if the guys can go 2-3 through the first five games, then I’ll be perfectly happy with that. Three road games and home dates with Kansas and Texas isn’t an easy way to start the Big 12 season. If they manage 3-2 I’ll be ecstatic. The next three are all winnable but they are also tough when strung together consecutively. Texas Tech on the road doesn’t seem that bad as a stand-alone game, but that is a decent team that is 0-3 so far in league play. Playing a desperate team on the road isn’t usually a recipe for success, but if they pull it off, ISU will be playing with “house money” at home against KU this Saturday.

The Cyclones still do not have a “bad” loss–or a “quality” win, but Tourney hopes are still very much alive. If you ask me, get to 10 regular season conference wins and they are nearly guaranteed a bid. Get to nine league wins and they are in the mix when the conference tournament starts in Kansas City.

Eight is enough Being down to eight players isn’t all that bad. It makes setting a shorter rotation a whole lot easier, since options are limited, which can allow for those that are playing to get into rhythm easier. Two of the best teams in Cyclone history–the 96-97 Sweet 16 team and the 99-00 Elite Eight team–rarely went three deep into the bench. With the injuries it seems to offer another reason for the guys to band together and circle the proverbial wagons. Of course, conditioning and foul trouble are now a much bigger issue and there are some defensive pressure scenarios that will be limited, but the situation has it’s positives as well. That can be much easier to say from my position though.

On Craig’s draft stock It’s a little bit like many fans saying that they didn’t expect to beat Duke a few weeks ago, but then having a coronary when Duke won. It’s baffling to me and I don’t understand. Absolutely everyone knew that Craig’s scoring and rebounding would be down this year. He finally has some adequate assistance in both areas. Even so, he is averaging 16 points and eight rebounds per game (compared to 20 and 9.5 last season) while dropping a few percentage points in two-point field goals to 44 percent from last season and jumping to 46 percent from 3-point land after shooting 28 percent last season.

Considering that Marquis Gilstrap has come in and is currently averaging 14 points and nine rebounds per game, does this seem like a scenario that should cause Brackins’ stock to dip? I certainly don’t think so, especially when he is making so many improvements with how he handles double teams. He is also emerging as the vocal leader for the team getting in guys’ faces when he knows that is what’s needed.

Diaper Dendy If LaRon Dendy continues to play the same way he has the past two games he will be a big time help as the season progresses. When he plays within himself he can make a dramatic impact on the game. Playing smart with the basketball in his hands and playing solid help-side defense are his biggest areas of concern. The spark he provides on the defensive end with blocked shots and on the offensive end on fast breaks and clean-up plays will continue to be crucial.

Wrestling tid-bits Another big win for the grapplers and an increased ferocity for bonus points from last year were the story lines from the win over Illinois on Saturday. Questions continue to swirl around the health of Nick Gallick and his availability for the rest of the season and the likelihood for a medical hardship waiver. Gallick is a potential national champ at 141 and his absence would certainly hurt for the national title hopes as a team in March. However, Dalton Jensen is easing that pain at least a little bit with his second pin of a top 10-ranked wrestler in the past eight days.

I should have squeezed this in last week, but I was at the Saturday session for National Duals in Cedar Falls and had a great time. It was fun to follow the multiple mats of action and was the first time I have been to such an event. A Special mention goes out to Evan Brown (from my hometown of Nevada, IA), who had an impressive day for the University of Dubuque and is the Division III returning national champ and top-ranked wrestler at 174.

The ladies did get their first conference win on Saturday at Colorado and have a tough home date with Kansas on Wednesday, who is flirting with the top 25. Then a roadie with Texas and home game with Oklahoma, two more top-25 teams.

Just like clockwork The Jamie Pollard disagreement seems to come up over and over again. I don’t want to dive too deeply into this at the moment, but I have a couple of quick points to make. From my stance, the only two mistakes Pollard has made have been with losing KJ Kindler and “curtain-gate” (which may or may not have been Cael’s doing). Not many argued with the hire of Chizik at the time it was made. Rightfully so, as it was a good hire at the time.

Also, if you’re going to compare Pollard to a previous AD’s successes, to prove why Pollard is “so terrible”, make that AD Gene Smith and not Bruce Van De Velde. Yeah, there was unprecedented success while BVD was AD, I would just like to know what he had to do with any of that success. Did he hire Dan McCarney? No. Did he hire Bill Fennelly? No. Did he hire Larry Eusatachy? No. Did he hire Wayne Morgan? Yes, but he wanted to hire five other guys first and Jeff Lebo was his top choice. Check out Auburn’s success over the past seven seasons to see how that more than likely would’ve gone. He did hire Christy Johnson-Lynch, which is paying off nicely now.

Trivia Time Last week’s question: When was the only victory in Iowa State history over a #1 ranked team? Who was the opponent? 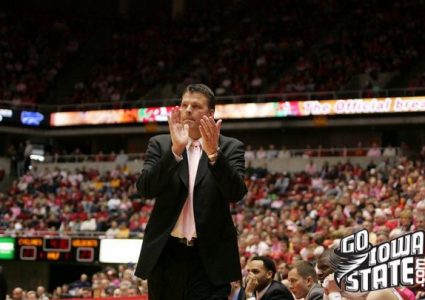