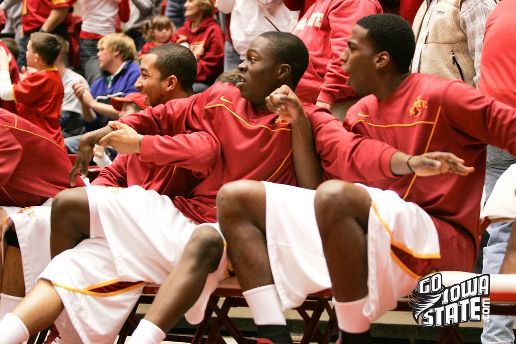 For an Iowa State fan, is there a place in the Big 12 where you want to win more than in Lincoln?

Volleyball, football and men’s basketball have all won at Nebraska so far during this athletic season. Last night’s 56-53 victory for Greg McDermott’s team could prove to be a momentum builder for the rest of 2010 for men’s basketball, as it was in football this fall.

Iowa State snapped a 16-game Big 12 road losing streak against the Huskers and like you all saw, it was ugly. Really, who cares? You don’t get style points for winning by 20 in college hoops and a road win is a road win. It wasn’t pretty but the Cyclones got the job done.

If you haven’t gotten a chance to watch the locker room video from after the game, check it out by CLICKING HERE.

That was a pretty telling piece of video to me. That doesn’t look at all like a locker room in turmoil. Did you see who was in the middle smiling and cheering with his teammates? That was Chris Colvin. Craig Brackins, despite being held to only six points on a 3-of-11 night from the field, was positive and acted like a true team leader in the video.

It was a very encouraging win for the entire program. The Cyclones blew a 12-point lead at the end of the first half. They didn’t curl up and die. The team fought back and won a close game on the road, in the conference while their best player scored six points.

“It doesn’t get any easier from here,” I’ve read quite a bit of on the board.

That is true. The Big 12 is brutal (in a good way). But factor in that four of Iowa State’s five losses (Duke, Texas, UNI and Cal) have been to teams in the RPI’s top 25. That’s got to make a Fanatic feel a little bit better about the rest of the season doesn’t it?

Two months ago, every other Cyclone beat reporter and I were writing stories about how much depth this year’s team was going to have. That actually appeared to be the case for a while. Since then, Jamie Vanderbeken, Chris Colvin and now Charles Boozer have all been subtracted from the equation. All of the sudden, depth has become a serious issue for Greg McDermott.

Last night, only eight scholarship players were available for the Cyclones. On Saturday afternoon, the Des Moines Register’s Randy Peterson reported that Boozer would miss the rest of the season with a torn ACL. The Cyclones just lost their spark plug. Boozer was never going to be a dominating force for the Iowa State but with him, you always knew what you were going to get. With Charles Boozer, you get a guy who is always going to work harder than everybody else and he’ll always be that energy guy you look to in certain situations. Boozer specifically cannot be replaced. I’m hoping that Chris Colvin can be that player in a different sort of way when the month of February comes around.

Texas 72, Texas A&M 67 (OT) – The Horns fought off a serious scare from a rival. A&M impressed me in this one as they had struggled prior to this contest in conference play. This is just another example of the parity in the Big 12 this season.

Baylor 83, Oklahoma State 70 – The Bears have a ton of talent. Can they consistently show up down the stretch?

Kansas 89, Texas Tech 63 – Iowa State’s next two opponents met up on Saturday. One was much better than the other. Wednesday night’s tussle with Tech is a very winnable game for Iowa State.

Oklahoma 66, Missouri 61 – The young Sooners are learning how to win. If they can keep that up, watch out.