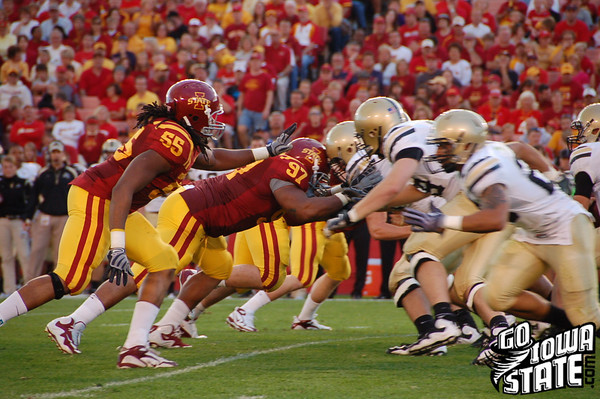 Heading into the 2009 Iowa State football season, the defensive line was a giant concern for Paul Rhoads and his staff. After senior defensive end Rashawn Parker torn his ACL in the first quarter against Army, things looked even worse.

Did the 2009 Iowa State defensive line set the college football world on fire? Nope. But they played with a ton of heart and were a big part of Iowa State’s run to and Insight Bowl championship along with a 7-6 season.

Last week, CycloneFanatic.com sat down with the man who works with the defensive line on a daily basis, Curtis Bray. In the Q&A below, you’ll get information on last year, insight on the future and exclusive information on what makes this specific group of Cyclones tick.

CF: The defensive line was everyone’s big concerning heading into the season. How do you feel the unit performed in comparison to what you expected?

CB: You always hope for a little bit better and we weren’t disappointed by any means. One thing about our guys is that they always played hard. They played reasonably well against the run up front. One area that we still need to improve on is rushing the passer and putting pressure on the quarterback.

CF: Losing Rashawn Parker at the beginning of the season was a huge hit. How did the guys recover from that?

CB: I think that it took a while to fill that position. Rashawn opened up some other things for Chris and for other guys. So that was a big loss. It was really hard to fill. We just didn’t have a lot of depth at the defensive end position. They did okay.

CF: What are your thoughts on the way that Roosevelt Maggitt and Patrick Neal performed under the circumstances?

CB: I thought that Patrick was probably a little bit more steady. Roosevelt flashed a lot. That is going to be an interesting battle this spring for that spot. Roosevelt has a lot of potential. Patrick obviously has more experience playing at this level. Roosevelt played better and got better as the season went on. Patrick again was steady. He was very dependable. He always played his heart out.

CF: It seems to me like you have one guy with a very high ceiling and then your solid, consistent performer? Isn’t that a nice mix?

CF: What is the game plan for Rashawn now?

CB: We’re going to take it slow. We know what he is coming back for. That is the season. Not spring ball or camp. He has played enough football where reps aren’t as big as timing and shaking rust off. We just need to be smart with him.

CF: Is he your obvious leadership guy next year?

CB: He’s got to be. He was a leadership guy this year. He was one of our most vocal leaders, even though he wasn’t a captain. When he got hurt, he backed off of that because he felt like since he wasn’t playing, he couldn’t be a good leader. We definitely need him to be a leader. We are going to have a young defense. We need him.

CF: Is the plan right now to move Cleyon Laing to the interior part of the line?

CB: We haven’t really discussed it yet. But with his size, he is getting bigger and bigger. He’ll be a red-shirt sophomore and probably around 280-pounds this fall. Whether he is helping us in the outside or inside, wherever he can get on the help us. He needs to.

CF: From what I’ve heard, he had a pretty decent season of practice. What did you take from it?

CB: He definitely got better as the season went along. He has probably played the least amount of football of anyone being from Canada and not having as big of a background. He improves everyday. He’ll be a good player for us.

CB: Bailey did a nice job. He was coming off of an injury too. He got better and he competed. That was the biggest thing. He really took over that position. He played hard and got better. He got a little bit warn out towards the end. Depth is going to be important for us. He was a pleasant surprise for us because he didn’t practice last spring very much. Having him come out in the fall and seeing him for the first time, he was a nice surprise.

CF: Nate Frere is gone next year. What kind of a hole does that leave?

CB: He was a good leader and he was also a guy who played a lot of football. It is a significant hole but it is just like any other year. Somebody has to step up. Nate brought a lot of intangibles to the position and the entire defensive line. He was the leader on that line once Rashawn left. That is one of the goals of ours coming into this spring. We have to find somebody to replace him.

CF: Who are some front-runners?

CB: Stephen Ruempolhamer has really got to be the guy who steps up. He is probably the best interior guy that we have right now. Then, Austin Alburtis is a good leader and has great qualities. He is going to be a senior. I think that between those two guys, one of those guys has to step up in that role. Both of them need to be players for us.

CF: What about Jake McDonough?

CB: He got a lot better once he was able to put his weight back on. He had a weight issue over the summer. He is a guy who will be in the mix there. We should be a little bigger and more athletic at that position.

CF: What is your goal for the entire unit this offseason?

CB: With the guys who are returning, they can’t approach it as a new season from the standpoint of, they have to pick up where they left off as far as learning what we are trying to do. It was a new staff so they were trying to learn the techniques we were teaching. We can’t go back and start from zero again. We have to keep improving on those positions. We are going to be a little bit bigger and a little bit more athletic inside. The biggest point for the offseason is for guys to continue to improve that foundation.

CF: With the guys you have coming back, how would you describe their mentality?

CB: (laughter) I’m still trying to learn it. I’m still trying to learn it. But they’ve got to mature. That is something that they have to do. A lot of these guys played early but they are turning around and are going to be juniors and seniors. Now, their role is going to be playing a lot of football. I think that the biggest word that we need to use for this group is urgency. They have to be urgent with everything that they do.

CF: Let’s go back to getting more pressure on the quarterback. How exactly do you teach that?

CB: I think the biggest thing is that most of the guys know how to do it in the drills. The hardest thing is taking the drills to the field. The biggest problem that defensive linemen have when rushing the passer is that they end up looking at the quarterback. They just try to see it and go there but they have to make moves. You can’t just walk up to an offensive lineman and stop your feet. You can tell a good d-lineman and if he is going to get pressure just by watching his lower body. Does he keep his feet progressive to the quarterback? I think that we got better at getting up the field and progressing. They just need to be a lot more consistent with what we are trying to do. They have to have a lot more confidence in themselves. You also have to be a smart player with everything that you do and take some chances every once in a while.