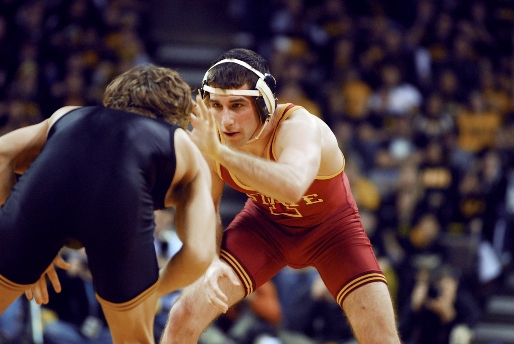 When the top-ranked Iowa Hawkeye wrestling team visits Ames on Sunday evening, the second-ranked Iowa State Cyclones will be seeking their first victory against their in-state rivals since the 2004-05 season. Kevin Jackson will get his first taste of the rivalry as a head coach, after inheriting a talent rich Iowa State team back in May. Jackson, a former Olympic gold medalist and considered one of the great freestyle wrestlers of all-time, looks to instill a more aggressive and dominating style in the ISU wrestling room this season. The Cyclone faithful have hopes that he will get the ISU grapplers over the hump and bring a national championship back Ames, something that hasn’t happened since Jackson was a senior captain on the 1987 squad. One thing is for certain. When the Hawkeyes come to Hilton Coliseum at 6 p.m. on Sunday, they are in for a battle and will get a preview of what’s to come at Omaha in March.

The 125-pound bout will be one of the key match-ups on the night and will be crucial in deciding the outcome of the dual. RS freshman Andrew Long has been impressive in his matches to start the season, going 9-0 including two major decisions over UI back-up J.J. Krutsinger. Matt McDonough has also gotten off to a fast start, going 7-0 so far this season. Both of these wrestlers are very evenly matched and this match is really too close to call. Most are picking McDonough to win but I have confidence in Long at home. Long by decision. 3-0 ISU.

This is another key bout and also somewhat of a toss-up, featuring two returning All-Americans in seniors Nick Fanthorpe and Daniel Dennis. After having surgery this past summer, Fanthorpe is still nursing a nagging hamstring and has not wrestled this year. Coach Jackson reiterated in his press conference on Monday that Fanthorpe is still 50-50 and will not wrestle if he is not close to 100%. I am hopeful he will start Sunday. Dennis has gone 7-0 to start the season, with all victories coming by way of major decision, tech. fall, or fall. Fanthorpe has yet to beat Dennis, losing their only bout last year 4-3. If Fanthorpe was 100% and already had a few matches under his belt, I would pick him to pull the upset against Dennis. Fanthorpe will get the best of Dennis later in the year, but I can’t pick against him right now. Dennis wins by decision. 3-3 All.

This match-up hearkens to the 2007-08 season, the last time Dan LeClere held the starting job at 141 for the Hawkeyes. That was also the last time Nick Gallick faced LeClere, losing both matches in the 07-08 season by decision. Gallick has progressed nicely since then, becoming a two-time All-American with a third place finish last season. He will be in the hunt for a national title this season. Gallick is also questionable for Sunday nights line-up, but I would say he is probably more likely to start than the other Nick. LeClere is still a very dangerous wrestler and if Gallick is not 100% this match it could quickly turn in Iowa’s favor. I still expect Gallick to get revenge on LeClere and win by decision. 6-3 ISU.

Obviously ,this is a very tough match-up for Mitch Mueller and ISU, with Metcalf holding a 3-0 career record against Mueller, with his last victory coming by way of technical fall at the ISU/Iowa meet last season. While Mueller is a solid wrestler, there is little chance he pulls the upset here and Metcalf will likely score bonus points for Iowa. While many like Metcalf by technical fall with back points, I’m picking Mueller to gut it out and ONLY lose by major decision. Metcalf by major decision. 7-6 Iowa.

This is another toss-up. The final outcome of the meet could very well depend on the winner of the bout in which no ranked wrestlers will be competing. Starting for the Cyclones will be either Andrew Sorensen or Nate Carr Jr. Iowa will look to start one of three wrestlers in Matt Ballweg, Aaron Janssen, or Jake Kerr. Right now, I would guess Ballweg or Janssen would get the starting nod for Iowa. Carr Jr., who has also been battling an injury since the Harold Nichols/Cyclone Open, and Sorensen are pretty evenly matched and think both will give the Cyclones an equal shot of winning this bout. Ballweg beat Sorensen earlier this season, but overall I would consider this match to be a toss-up. Since the meet is in Ames, and I am a hopeful ISU fan, I will give the edge to the Cyclones. ISU by decision. 9-7 ISU.

This is the marquee match-up of the evening, with both wrestlers in the hunt for a national title this year. Ryan Morningstar (or Morning-stall as we Cyclone fans like to affectionately call him) holds a 3-0 advantage over Jon Reader, with all three wins coming by two points or less last season. Morningstar is a gritty wrestler and has close matches with most opponents, while Reader likes to score and push the pace. I like the fire Reader has shown this year and the way he has dominated his opponents thus far. Even though he’s never beaten Morningstar, I think he will finally get over the hump Sunday night. Look for Reader to win by decision. 12-7 ISU.

Although I would give Duke Burk an outside chance of winning this match, I am mostly hoping that he can wrestle Borschel tough and prevent giving up bonus points. Borschel has looked very solid to start this season, while Burk scored a decision against Iowa’s back-up, Ethan Lofthouse. Burk is 0-2 against Borschel, losing by decision at the ISU/Iowa dual last season. I like Burk to keep it close at home, but could see this turning into bonus points for Iowa. Borschel by decision. 12-10 ISU.

Wrestling for the Cyclones at 184 will be either 18th ranked Jerome Ward or Joe Curran. Both of these wrestlers are evenly matched, with Curran winning the wrestle-off, but neither is likely to get the best of second-ranked Phil Keddy. While I like Curran’s fire and determination as a senior, I think Ward’s style matches up better against Keddy. Keddy won a 3-2 decision against Ward last year, and I’m hoping Ward can keep the match close again this year. I will again show my ISU optimism and pick Keddy by decision, but I could see Iowa getting bonus points at this weight as well. 13-12 Iowa.

Number one ranked and returning national champion Jake Varner will battle 10th-ranked Chad Beatty in the 197 pound weight class. Varner and Beatty have never squared off against each other but Varner should control the match and win in a convincing manner, albeit the win will likely only be by decision. However, depending on how angry Jake gets before the match, I could see this turning into bonus points for the Cyclones. Varner by decision. 15-13 ISU.

Returning two-time All-American Dave Zabriskie comes into the dual with a fifth ranking, but will have to wait to get revenge against Iowa heavyweight Dan Erekson. Erekson beat Zabriskie by way of fall at the national tournament last season, but has since been sidelined with a torn pectoral. Jordan Johnson or Blake Rasing will fill in for the Hawkeyes, with Johnson getting the majority of the starts this season. Zabriskie will be heavily favored in this bout, but Big Z struggles to score bonus points at times due to the amount of weight he gives up against most heavyweights. Rasing is the larger of the two Iowa wrestlers so they may look to throw him out there in hopes of slowing Zabriskie’s offense. I like Zabriskie to win by decision. 18-13 ISU.

If everyone wrestles up to their potential, this should be a very exciting and close dual. The key match-ups to watch will be 125, 133, 157, and 165. The uncertainties surrounding this event only add to the excitement. The 125 and 157 pound bouts are basically toss-ups and could go either way. The 133 and 165 bouts should be some of the most exciting of the night but if Fanthorpe is out at 133, look for Iowa to put ISU in a hole that they may not recover from. While I am laying the ISU optimism on thick and have the Cyclones pulling out the victory, it would be easy to see some of those swing weights go the other way or have more bonus points scored for the Hawkeyes at 149, 174, and 184, which could make for a lop-sided Iowa victory.

If you’ve never attended an ISU-Iowa wrestling meet…shame on you. The curtain is down, #1 vs. #2, one of the greatest rivalries in sports, let’s show them some Hilton Magic…have you got your tickets yet??

WRESTLING: No problem with Arizona State