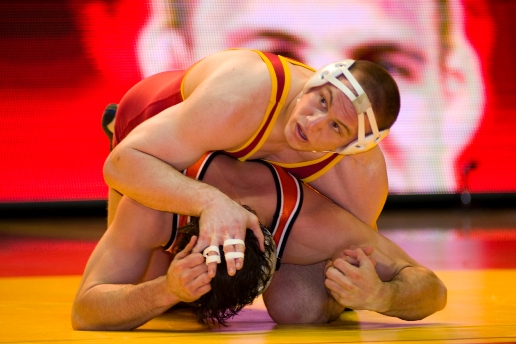 By Ben Crawford, CF.com wrestling blogger The second-ranked Iowa State wrestling team compiled 144.5 points and finished second at the 47th Annual Midlands Championships in Evanston, Ill. on December 29 and 30. The University of Iowa won the championship with 168.5 points. The Cyclone wrestlers have now finished second three years in a row at the Midlands, which is a national invitational tournament attracting America’s best wrestlers.

The tournament was highlighted by senior Jake Varner’s Midlands championship at 197-pounds (Varner finished runner-up last year, and was a champion of the event in 2007). Other Cyclone wrestlers to make the finals included RS freshman Andrew Long at 125-pounds, junior Jon Reader at 165-pounds, and senior Dave Zabriskie at heavyweight. Long wrestled great en route to his finals appearance, where he lost to rival wrestler Matt McDonough from Iowa in overtime. Reader made his third straight finals appearance but was unable to get over the hump, losing to top-ranked Andrew Howe of Wisconsin in overtime (SV2). Zabriskie also lost his finals bout against the fourth-ranked heavyweight wrestler in the country, Jarod Trice of Central Michigan.

Overall, the Cyclones did well to finish second, with 141-pound wrestler Nick Gallick out of the lineup. The Midlands is sometimes thought of as a “mid-season” national tournament, with the winner often taking the NCAA title in March. However, this is not necessarily the case anymore because of recent changes in the scoring system, allowing teams to score a total of 10 wrestlers, regardless if two or more wrestlers are at the same weight. So fear not Cyclone fans, with a healthy lineup at the end of the year, we are still in great position to bring a National title back to Ames!

No. 2 Cyclone wrestlers to compete at the National Duals Jan. 9-10 in Cedar Falls The Cyclone wrestlers will be looking to take home their first National Duals title since 2000, when they travel to Cedar Falls this weekend to wrestle in the UNI Dome. Iowa State received a two-seed in the tournament and will wrestle unranked Bloomsburg in the first round at 11 a.m. Iowa is the heavy favorite to win the event, winning back to back titles in 2008 and 2009. To be brutally honest, it will be very tough for the Cyclone wrestlers to beat Iowa at the Duals with senior 141-pound wrestler Nick Gallick out of the lineup, but I fully expect them to wrestle tough and make the finals.

First Round, Bloomsburg – The Cyclones should have no problem taking care of Bloomsburg in the first round, and realistically should only lose one or two matches. The Huskies only have two ranked wrestlers – ninth-ranked Matt Moley at 157-pounds and 11th Rick Schmelyun at 165. Schmelyun’s bout with third-ranked Jon Reader will be the match-up of the dual.

Quarters, Maryland – In the second round, ISU will most likely face seventh-ranked Maryland. Maryland has a tough dual team and will cause some match-up problems for the Cyclones. Key match-ups include:

Fanthorpe has beaten Bell twice in his career, but expect a hard fought battle that could go either way. ISU will probably give up a major at 141 and a decision at 174, but should hold on to win the other key match-ups. In the end, I see ISU pulling this one out comfortably, as long as there aren’t any upsets.

Semis, Cornell or Ohio State – The semi-final round will bring the Buckeyes or…Big Red. Although Ohio State (I refuse to put ‘the’ in front of their name) garnishes the higher national ranking, I expect Cornell to beat the Buckeyes. Therefore, my key match-ups against Cornell look like this:

If you couldn’t already tell from the match-up listing, this is going to be a battle. At 125, I believe Nickerson, last year’s NCAA runner-up, is out with an injury. That’s a big break for the Cyclones. The 133 and 184-pound bouts are somewhat of a toss-up but other than that, I see the higher ranked wrestler winning most of these matches. Expect Iowa State to win in a close and very exciting dual.

Finals, you guessed it, Iowa – If and when the Cyclone wrestlers make it to the finals, there is a 99.9 percent chance they will be wrestling their in-state rival. The dual on Dec. 6 turned out to be very close – with Iowa holding on for an 18-16 win over the Cyclones – and this match-up has the potential to be just as close, even with Gallick out of the line-up at 141.

The 125-pound bout is a very intriguing one, as Long has made substantial improvement since he wrestled McDonough in December. As I mentioned earlier, Long lost to McDonough in the finals of Midlands. If he keeps closing the gap, he just might upset him on Sunday. Iowa’s Dennis (133) did not wrestle at Midlands so it is unsure if he will be wrestling this weekend, which would be a huge help for the Cyclones. Losing Gallick 141 is a huge hit as Iowa could pick up bonus points here. Most of the other weights should play out similar to the dual back in December, but it’s going to be tough for Ward to upset Keddy again.

This should be one heck of a dual, and again, one that the Cyclones are fully capable of winning even without Gallick. Makes March that much more intriguing huh? So come on out to the UNI Dome Saturday morning to cheer the Cyclones on to victory and watch some great wrestling. Tickets are $25 for the day or $45 for the entire weekend. 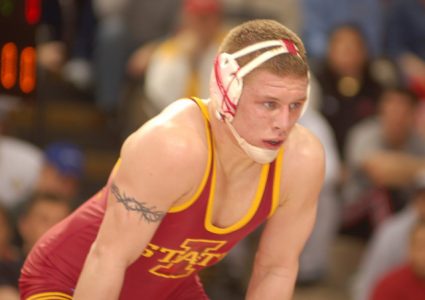