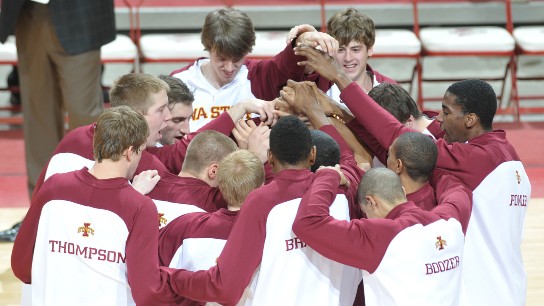 We’ve now all had the weekend to digest Iowa State’s 81-71 win over Iowa on Friday night.

For those who don’t know, it is finals week in Ames so there won’t be a whole lot of news coming out of the sports programs for a few days. For those students who frequent the CycloneFanatic.com forums, I apologize in advance for your having to study. Don’t let this website be a distraction okay?

I’ve put together some thoughts regarding the state of Iowa State’s men’s basketball team, 10 games into the season. Feel free to post your comments as well.

Chris Colvin’s numbers against Iowa didn’t blow anybody away. His final stat line looked like this:

Four points, one assist, one steal and two turnovers.

However, with a little over 10 minutes to go in the second half Friday night, I took the following note: “Chris Colvin is growing up in front of our very eyes.”

I could see his confidence grow in that key five-minute span. In that timeframe, Colvin went from being a guy who scared me every time he touched to a ball, to maybe, Iowa State’s most effective point guard. That stretch in the middle of the second half was the best basketball he has played all season long, by far, in my opinion. Greg McDermott agreed with me when I asked him about this after the game.

“He gave us a huge lift off of the bench,” McDermott said. “Defensively, it is tough for an opposing point guard when Diante Garrett takes a seat and Chris Colvin is waiting for you. Chris has unbelievable balance. He has quick hands and quick feet with a great understanding of the game. He is going to be a special, special player. We have to continue to help him develop and find more ways to get him on the floor.”

During this stretch, I made it a priority to glance down at Iowa State’s bench to see the reaction of both Garrett and Dominique Buckley. Garrett was standing up cheering. Buckley…not so much. It’s pretty clear to everybody now that Buckley just might be the odd man out at the point guard position at Iowa State, for right now at least. I still believe that Buckley can play some serious basketball though. We’ve all seen him do it. Remember the end of last season? He came on as strong as any Cyclone on the roster. I hope that Buckley’s morale stays high. Depth at point guard is a very good thing to have. He’s a quality player that I still think can really help this program over the next few years.

I don’t care how “down” either program is. When Iowa State and Iowa get together in a college basketball game, it is and always will be a big deal.

When people say that Friday’s game wasn’t a big deal, those are probably the same folks who don’t like candy on Halloween. They probably are the ones who tell little kids that Santa isn’t real. You get where I’m going.

It’s Iowa State and Iowa! Get excited about a Cy-Hawk victory!

These teams could be a combined 0-20 and it’d still be a big deal, to me at least. It’s not about how good the teams are. It’s about the spirit of competition and state bragging rights. Cyclone basketball fans will have them for the next year. That’s a good thing. Be happy about it.

Was Friday night’s win over Iowa perfect? No. It was far from it. But the team looked a heck of a lot better than they did in the previous few outings and I’d say that’s somewhat of a victory on a large scale. Am I wrong?

In McDermott’s post game press conference, he described a behind closed doors meeting that his team had last Monday before practice, where they literally talked about everything that had to do with Cyclone basketball. Players had an opportunity to get some things off their chests. The coaches did too.

I applaud McDermott for this. When I watch Iowa State’s basketball team, to me, it is pretty obvious that they’re extremely talented. I’m talking NCAA Tournament talented. But the problem is, not all talented teams achieve their goals throughout the course of a very long season. It takes a true team effort to have an outstanding year. Guys need to be on the same page. So why wait until January to get everybody thinking on the same level?

I love McDermott’s move to coach this team not only physically, but mentally as well. I’ve seen people post comments that go a lot like “these are division one athletes…they don’t need to be babied.”

Yes, they’re division one athletes but they are also real human beings who have parents, girlfriends, hobbies other than basketball and most importantly, feelings. The morale of a basketball team full of young men is extremely important. Again, I give McDermott and his staff some major props here. Grown men talking about their feelings isn’t a bad thing. In this case, after a rough week, it was very necessary.

Up next for the Cyclones is Bradley next Sunday afternoon. This will be the beginning of a key, three game stretch with other home games against North Dakota and Houston.