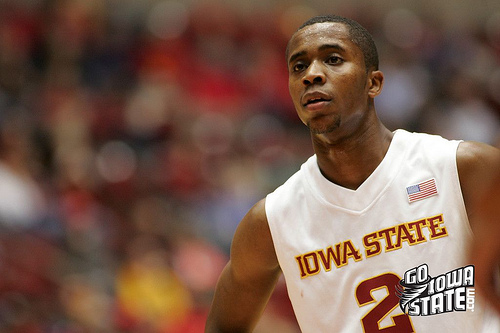 What a night Tuesday turned out to be.

When I left the media’s weekly interview segment with Iowa State players on Monday afternoon, all seemed to be well in the world of Cyclone hoops. The players, coaches, managers, staff, etc. all seemed to have a little extra hop in their step. It was actually very refreshing. I actually talked about this very topic with Matt Perrault and Ken Miller on KXNO Tuesday night. All was peachy.

Then, Tuesday night came and out of nowhere, Lucca Staiger quit the team to go play professional ball in Germany.

It is now time to look forward because guess what? Iowa State has a game, tonight, on the road, against a desperate Texas Tech team.

Granted, those are seven quality players. But let’s face it. In the Big 12, eight was going to be really pushing it for Iowa State. Playing and winning with seven? That is nearly impossible.

So what now? Head coach Greg McDermott discussed this during his teleconference last night and essentially, he threw down three options.

1) Play with seven scholarship players, plus a minute or two from true freshman (walk-on) Alex Dorr, who is nowhere near ready to play in the Big 12 I might add.

McDermott said that he’d discuss those options with his staff and go from there. Frankly, they all stink and this is one giant lose-lose situation. Here’s why.

If you play with seven, you’re walking a fine line as far as foul trouble/injuries go. Plus, your chances of winning decrease.

On Monday, McDermott told us that pulling a red-shirt off of Oliver wasn’t possible due to the fact that he isn’t ready. Plus, If you pull a guy’s shirt in the middle of January, that’s really not fair at all to the young man is it? I really do not think this will happen.

And finally, after stamping a February return date on Colvin, it’s difficult to go back on that now right?

Needless to say, I do not envy the position that the staff is in at this hour.

Without knowing all of the details, I hope that the staff chooses to go with seven. However, I doubt that they will.

Iowa State needs more than seven scholarship players to win in the Big 12. Period. Expect some sort of news from this to come out later today, probably this morning. I have a hunch that Chris Colvin will play again before the month of January ends. All reports indicate that he’s a changed kid. His teammates seem happy with him. I have even seen a different sort of demeanor in Chris over the last week. He seems much more content with all that is going on around him.

We will see, probably sooner rather than later as tip-off is just hours away.

Staiger’s departure affects two players more than anybody. Those men are Scott Christopherson and Dominique Buckley. Christopherson needs to score more without Staiger. He needs to take over that role of being the skilled marksman. He’ll be fine defensively. He’s actually always been a more complete basketball player than Staiger. He just doesn’t ignite that fear of going off for 30 on a given night.

If the Cyclones go with seven tonight, Dominique Buckley’s minutes will have to increase dramatically.

Stay tuned. It should be an interesting day.