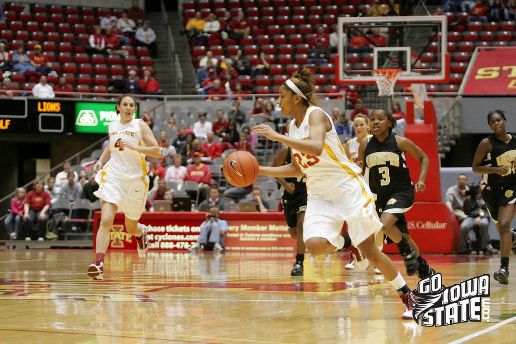 Well Fanatics it’s already that time of the week. Here is my weekly lap around the Big 12 in women’s basketball.

Iowa State (5-1)- The Cyclones have only played one game since my last blog and Iowa State now has won four in a row after beating Arkansas-Pine Bluff on Sunday. The Cyclones are feeling those growing pains I’ve previously written but hopefully they go away quickly as Iowa State has a very tough stretch the next two weeks. Iowa State plays host to Iowa tomorrow and will meet Minnesota this weekend.

Kansas State (4-4)- The Wildcats went 2-0 this week with wins over Grambling State and Missouri State. Brittney Chambers, a freshman, has really stepped up for this ball club and could be the spark they have been looking for. Kansas State’s next game is not until December 13th when they host Northwestern.

Kansas (5-2)- Kansas went 1-0 this week as they beat Northern Colorado 81-54. The 23rd ranked Jayhawks are getting their flow back and should be 7-2 next week, as they’ll host UMKC on December 10th. After that they host Creighton on the 13th.

Nebraska (8-0)- Remember a couple weeks ago when I wrote that this team may be overlooked. Well, this week Nebraska won’t be overlooked any more as they are now ranked 24th after they beating Miami. It will be interesting to see how long this team can stay unbeaten, as the next three games will tell a lot. The Huskers will play Creighton on the 9th, Northern Illinois on the 13th, and LSU on the 20th.

Colorado (6-1)- Colorado beat up on Seton Hall to move to 6-1 on the year. Don’t look now, but Colorado may end up giving a lot of teams a run for their money. Next up is a rivalry game against Colorado State on December 11th.

Missouri (5-2)- The Tigers moved to 5-2 after defeating a mediocre Ball State team and a decent Bradley team. The Tigers are first in offensive rebounds in the Big 12, which was not good for Bradley who has given up 15 offensive boards a game this year. The Braves also allowed Missouri to pull down 20. Missouri will now play UTPA on the 10th.

Oklahoma (6-2)- The 16th ranked Sooners had their hands full as they beat Arkansas in overtime 87-86 because of a lay up made by Amanda Thompson with nine seconds to go in overtime. Oklahoma will now travel to New York for a couple of days as they play Marist on December 9th. They will then go to West Point and play Army on the 10th.

Oklahoma State (5-2)- The Cowgirls made it look easy this week as they beat Coppin State 80-51. Oklahoma State’s next opponent is Vermont on December 13th.

Texas (5-3)- Texas, well, they played Tennessee… There really isn’t much to talk about other then they stayed within 20. The 17th ranked Longhorns now gets a break and won’t play again until December 16th ,when they host Mississippi. Texas A&M (7-0)- The 10th ranked Aggies are taking names as they beat 19th ranked California 68-61 on the Bears floor. Then, they beat down North Texas by 59 points. The next victim, oh I mean opponent, is TCU on December 12th.

Texas Tech (8-1)- Texas Tech went 2-0 this week with wins over an okay New Mexico team and Lamar. They now have a 10-day break until they travel to UCLA.

Baylor (7-1)- Baylor, well they won, again. This time against Louisiana Tech. But Tech kept it close as Baylor only won by 10. That is the lowest margin of victory this year for the Lady Bears so far this season. The sixth-ranked Lady Bears travel to Boston College on December 13th.