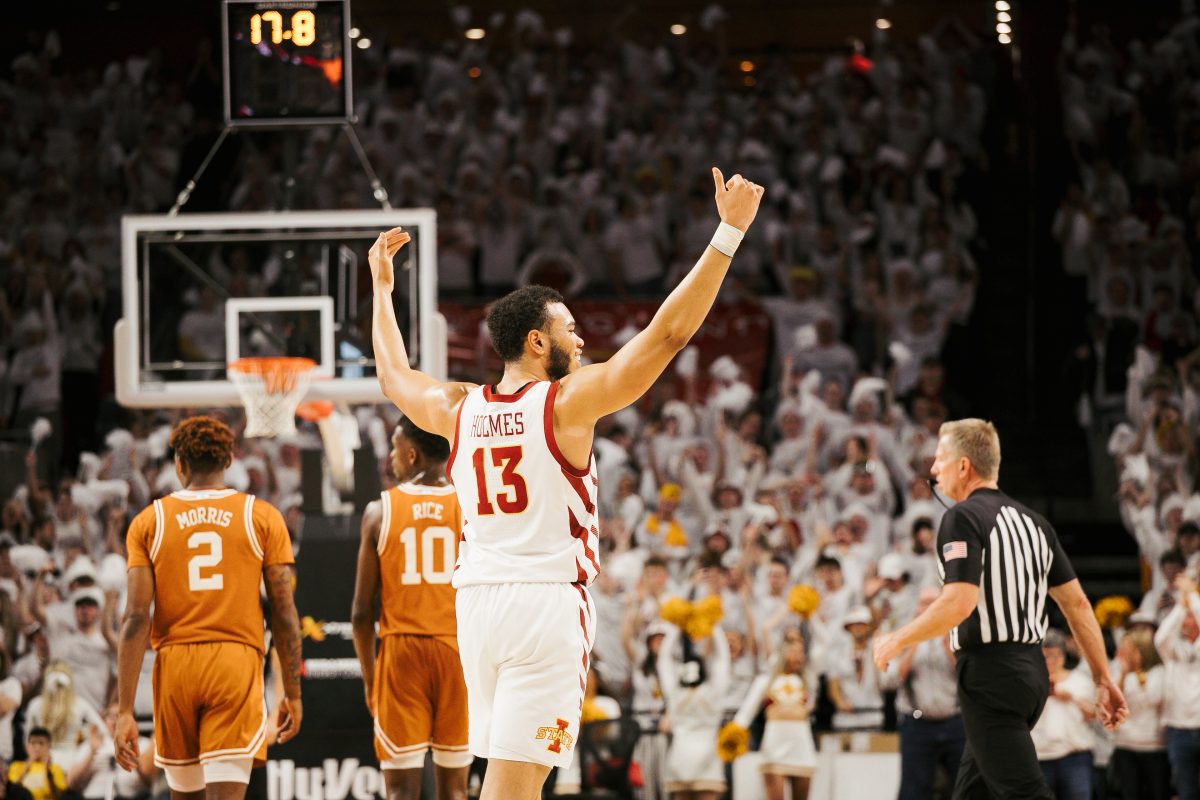 AMES — Iowa State could not afford to have Gabe Kalscheur on the bench.

T.J. Otzelberger‘s team had dug itself an early hole on Tuesday against No. 7 Texas at Hilton Coliseum. The hole was stretched further once Kalscheur, one of the league’s best defenders and hottest scorers over the last few weeks, took a seat with two fouls on his ledger.

Otzelberger knew he couldn’t afford to leave Kalscheur sitting on the pine as Texas built its lead to 29-18 with 7:51 left in the first half. The Cyclones were teetering on allowing an electric atmosphere fueled by the return of former Cyclone, and current Texas point guard, Tyrese Hunter to go to waste.

Kalscheur returned to the court, and a turning point arrived.

The 10-0 run had taken Iowa State less than four minutes. The deficit the Cyclones faced when Kalscheur checked back into the game had nearly been erased.

It was totally erased when Kalscheur canned his second 3-pointer of the night with 3:46 left in the first half. Iowa State took its first lead since it was 2-0 roughly two minutes later on a second-chance bucket by Tamin Lipsey.

That’s Iowa State men’s basketball in 2023, and the Cyclones are here to steal your lunch money.

They stole Texas’ on this night to the tune of a 78-67 win that, along with a Kansas loss to Kansas State in Manhattan, propelled the Cyclones into a three-way tie atop the Big 12 standings.

“The first 10 minutes, they were the aggressor,” Otzelberger said. “We usually set the tone or we need to set the tone with our defensive ball pressure and intensity. For whatever reason, we didn’t do a great job of that through those first 10 minutes. We continued to talk about it in our huddles and who we are and how we do things and as we started to turn them over, and pressure them more, offense and the game came around our way. That last 30 minutes, how we competed defensively, is the club that we are and who we need to be for 40 minutes.”

Kalscheur’s impact on this game cannot be overstated. His offensive contributions were important, but it was his lockdown performance on Texas leading scorer Marcus Carr that should garner the most attention.

Carr, Kalscheur’s former teammate at Minnesota, scored 11 points, shot just 4-of-9 from the field, was 1-of-3 from behind the arc and paired four assists with four turnovers.

One of the most prolific scorers in the college game over the last five years, Carr was unable to get to the spots he’s most comfortable on the floor. Rather than finding open teammates, he’d dribble the ball as he tried to find his next spot or would dejectedly toss it off to a teammate to reset the play.

Kalscheur was in his hip pocket the entire time.

“We knew that he wanted to get to his stuff and we knew he was going to get to a shot when he wanted to late in the shot clock,” Kalscheur said. “Getting in the gaps and making him try to give it up. He didn’t want to do that. He wanted to make shot and get that shot. I think we all did a great job as a team. I’ve played with him before, I know his tendencies, I know where he wants to go and where he wants to get to. Being in his junk was all I could ask for to make it a hard night for him.”

While Kalscheur had Carr fighting through hell in a cell, Hunter was booed every time he touched the ball. The crowd seemed to fuel the sophomore point guard from Racine, Wis. early in the contest when he knocked down his first two shots and helped the Longhorns build an early lead.

Hunter seemed to smell blood when he connected on a deep 3-pointer from the right wing with 12:17 left in the first half.

That was his last field goal of the night.

Hunter’s return to Hilton Coliseum couldn’t have gone much better in the minds of the home faithful. He posted 10 points, but did so on just 3-of-11 shooting from the field and 2-of-6 shooting from 3-point range along with three assists, two turnovers and two rebounds.

This night will forever be unique for the pregame atmosphere Hunter’s return to Ames provided. Students arrived early and were there to give their former point guard the business until the clock hit zero.

The night will be remembered for how the Cyclones were forced to out-physical one of the most talented teams in all of college basketball inside a snake pit environment that will strike fear in the hearts of Big 12 opponents from Stillwater to Manhattan.

Hilton Coliseum’s status as one of the sport’s marquee venues should have been reinstated after last year’s remarkable turnaround and run to the Sweet 16. It hadn’t quite gotten back to the same level of hostility that fed the building during the Hoiberg years and earlier.

Iowa State won this game by 11 points and largely wasn’t threatened once it built its lead up to double digits during the second half. You don’t need magic to out-will a team to the finish line.

You could feel it, though, lurking beneath the surface of this place.

Hilton Coliseum is all the way back.

“That was unreal,” Holmes said. “The fans here are unreal… It almost felt like an NBA playoff game with that intensity, the fans were on the edge of their seats, standing up. It shows the love and passion that this great university and these great fans have for us. It showed today and we’re thankful to have them supporting us.”

Holmes scored a game-high 21 points on 7-of-13 shooting from the field, 2-of-6 from 3-point range and 5-of-6 from the free throw line. Grill finished the night with 17 points and three 3-pointers.

Osunniyi continued his run of strong play by posting 11 points, seven rebounds and a block while battling foul trouble the majority of the evening.

Iowa State is still working to tap into Osunniyi’s best offensive talents, but they’re starting to find something in utilizing him off the pick and short roll into the middle of the defense near the free throw line. From that spot, he’s got good enough touch to finish with a floater, can use his height to create angles at the rim over the top of smaller defenders or can get a better angle to find open shooters on the perimeter.

“Offensively, he’s a weapon,” Otzelberger said. “He can catch the ball in that high post area and we’ve really started to utilize him there. Drive it to score, get to the free throw line, knock down the shot, the mid-range, the floater. He’s a weapon offensively. When he’s facing the goal, he’s really good, and he gave us a spark there.”

The Cyclones needed all of those contributions in order to come away with one of their biggest wins of the season to this point. This team continues to prove its strength is in the sum of its parts over the talent of individuals.

This team is all about individual players being able to do what they do best in order for their teammates to be their best, as well. There is absolutely nothing flashy about them. They don’t have a “star.”

They win, though, and they’re going to continue to do so as they become even more unified in pursuit of their common goals.

“The job’s not finished,” Holmes said. “We’ve worked hard to be in this position, but we can’t worry about that now. Gotta keep pushing and head towards Oklahoma State (on Saturday).”

Kalscheur isn’t Iowa State’s star, but he’s the closest thing this team has to one at this point. It would be hard to leave the senior from Minneapolis off first-team All-Big 12 ballots if the season ended today.

He deserves a long look for Big 12 Defensive Player of the Year, too. He proved that again on Tuesday by locking down one of the nation’s best bucket getters.

“Day in, day out, he guards the best player on each team,” Holmes said of Kalscheur. “That’s a fact. I see him put the work in and it’s amazing. I didn’t realize it in the summer when he was guarding me. It was a little tough. He made me a better basketball player. The way he understands defense and what he does, for us as a unit, is remarkable. Sacrificing his body, guarding the best player every single game. He’s truly special.”

This was the game Kalscheur had singled out back in the summer when asked which game he was most looking forward to this season. It is easy to understand why when you consider the two former teammates who lined up on the other side.

Carr and Hunter have lived the life of stars since the moment they stepped foot on a college campus. Kalscheur has lived in the shadows of both of them at different points in his college career.

Iowa State needed Kalscheur more than ever on this night, and just like the atmosphere, the students, the action on the floor for 40 minutes and so much more…

“The fans were amazing out there,” Kalscheur said. “They brought the magic into the building before tip-off, during the whole game, the whole 40 minutes. I know I felt it. I know the whole team felt it. The fans did an amazing job, and we gave them a show. We came out with the victory. That’s big for us.”