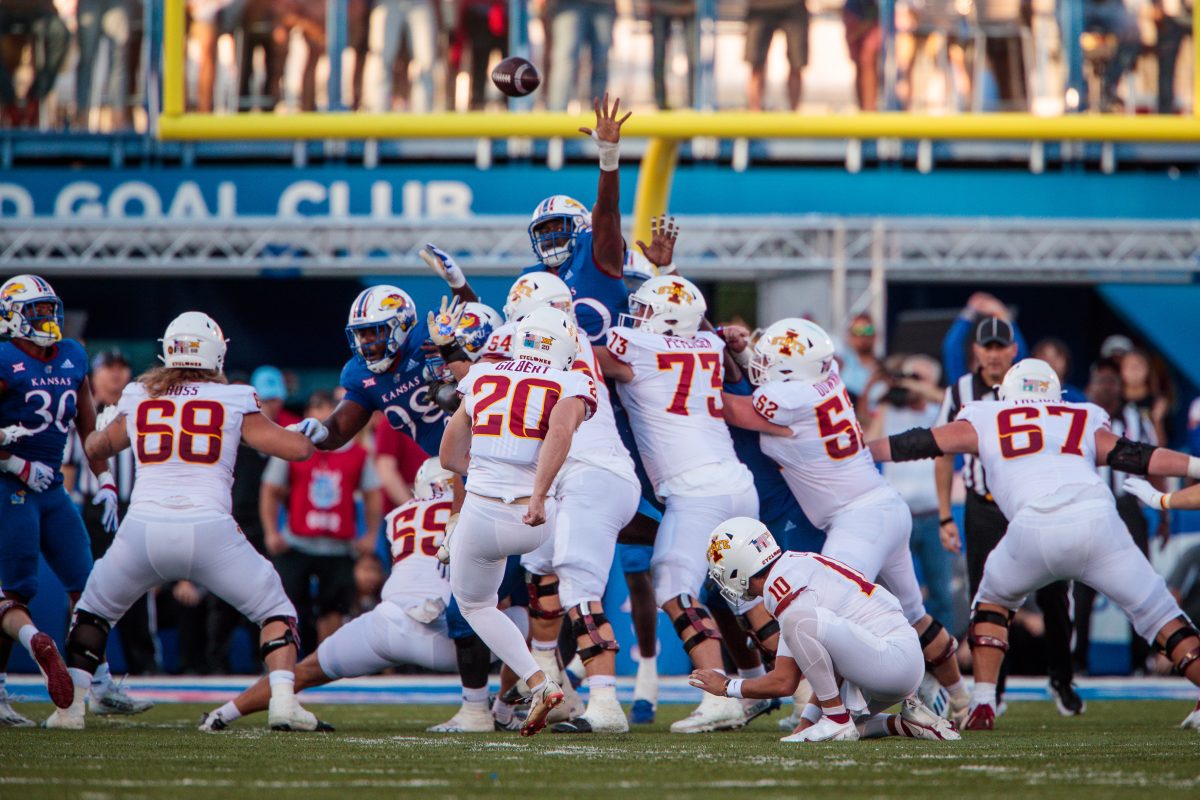 LAWRENCE, Kan. — There has never been a drunker game in the long drunken history of Iowa State football — or at least its recent history.

The Cyclone defense held one of the best offenses in all of college football more than 250 yards and 34.5 points below their season averages. They held Kansas’ early-season Heisman contender quarterback Jalon Daniels to his worst game of the season by a wide margin.

And, yet, Iowa State lost on Saturday in Lawrence due in large part to its offense’s inability to convert inside of Kansas territory and the complete ineptitude of nearly its entire special teams unit.

On seven separate occasions, Hunter Dekkers led Iowa State’s offense into Kansas territory. The Cyclones came away with points on only two of those possessions.

It was one of those days for Iowa State football. It was the type of day that will drive a fan to drink to forget about the drunk football game they just finished watching.

“I hated that some of those things came down to some young guys,” Iowa State head coach Matt Campbell said after the game. “Obviously, the kicking piece of it, you’ve got a true freshman in there. The disappointment is you had to put it in their hands at times.”

This was a game that probably should not have ever ended up hinging on the right foot of a true freshman.

Again, Iowa State worked its way into Kansas territory seven times and came away with only 11 points. The Cyclones only had 10 drives in the entire game.

You can often expect to win when you’re able to get into your opponent’s territory on 70 percent of your drives. Teams don’t often lose when they outgain their opponent by 100 yards or possess the ball for 11 minutes longer than the other team.

Yet, on the back of inconsistent quarterback play, a leaky offensive line and an inability to execute inside the 40, Iowa State figured out a way to lose this football game.

“I think we just didn’t capitalize, just plain and simple,” Iowa State star wide receiver Xavier Hutchinson said. “We have to be better and I know we can be better.”

We know Iowa State can be better, too, because we’ve seen it.

The offense we saw drive 99 yards with efficiency and pace in a thrilling win over Iowa isn’t the same one we saw falter time after time inside Kansas territory.

But, a lot of this falls on Iowa State’s inability to execute offensively.

“They did a good job of mixing things up with different blitzes,” Dekkers said. “We have a lot of things to clean up on offense. If we do that, we’ll be just fine.”

This version of the Iowa State offense was hampered by Dekkers’ lack of comfortability in the pocket, especially in obvious passing situations, and mistakes that left the Cyclones searching for answers to putting points on the scoreboard.

The Hunter Dekkers we saw complete 30-of-48 passes for 287 yards, a touchdown and an interception didn’t look like the same Hunter Dekkers that played with such poise in Kinnick Stadium.

Everything looked rushed — or overthought considering he took a couple of sacks long after the play had broken down and the offensive line could no longer hold.

Dekkers threw behind receivers with consistency, especially on short passes and dump down passes to running backs. He wasn’t consistently sharp in making throws to the sidelines or while under duress.

Teams have film on Dekkers now that they didn’t have during their game-planning earlier in the season. Defensive coordinators are starting to figure out what the big lefty doesn’t like to see and they’re dialing up pressure to force the ball out of his hands before he’s ready to throw it.

The result was a performance that was consistently inconsistent.

“You got to remember, man, it’s his fifth game,” Campbell said. “I think the thing that I still appreciate about what Hunter has the ability to do is to play the next play. I thought he did a really good job of that today. What was good and what wasn’t good, he kept playing, and there will be great growth from that.”

There will need to be growth from Iowa State’s redshirt sophomore signal caller if this offense is going to be better than it was on this afternoon in Lawrence — and it has to be better if this program is going to make its sixth-straight trip to the postseason.

We have already seen some of the desired growth from an Iowa State defensive unit that remains ridiculously young on the backend, but largely stout up front.

Jon Heacock’s group put on a virtuoso performance on Saturday against the Kansas offense that ranked near the top of college football in basically every statistical category.

Iowa State held a Kansas offense that averaged 472.5 yards of total offense and 48.5 points per game to 213 yards of offense and 14 points.

Kansas quarterback Jalon Daniels was drawing Heisman buzz this week after the Jayhawks’ 4-0 start to the season. The Cyclones held the junior to 7-of-14 passing for 93 yards and no touchdowns. The dual-threat produced only nine yards rushing on eight attempts.

Only once was Kansas able to drive the length of the field and score against the Iowa State defense. That was their last drive of the first quarter stretching into the second when they marched 79 yards in seven plays.

They scored only once more after Dekkers’ one interception on the day set Kansas up at Iowa State’s 19 yard-line.

After Kansas’ first two drives when the Jayhawks produced 111 yards of total offense, they were able to compile only 92 during the entire rest of the game.

“We said all week it’s going to come down to our ability to align, assign, be disciplined and be really gap sound,” Campbell said. “I think that’s a credit to our kids because I think there was great growth, quite honestly, on that side. We weren’t that a week ago.”

With this loss, Iowa State has lost eight of its last 10 one-score games going back to the 2020 Big 12 title game loss to Oklahoma. This program built on winning in the margins has not been winning the margins consistently enough.

That is easy to say when you consider one of those margins, special teams, has failed Iowa State countless times over the last three years.

On this day, Iowa State missed three kicks, muffed a punt that Kansas recovered then fumbled right back two plays later and allowed a 45-yard kick return. There was nearly disaster on Iowa State’s only extra point attempt of the day, too, but holder Blake Clark made a gritty play to get into the end zone and convert a two-point conversion after a bad snap.

This all follows Iowa State having two punts blocked during its win over Iowa last month.

At some point this season, every area of special teams besides the kick return unit, which is really only there to either fair catch or watch the ball fly over their heads, has failed Iowa State at some point.

This team is not good enough to win with special teams that are a liability at nearly every level — and that was proven once again on this beautiful Saturday afternoon in the Kansas hills.

“I think we’ll only continue to grow from this,” Campbell said. “It sucks that you’ve got to grow with a loss on a day where you weren’t your best in some of those areas.”

Surely, there will be questions about whether or not Campbell should have sent Gilbert out there on fourth and one to try and kick a last-second field goal that would have sent the game to overtime rather than going for the win.

It probably never should have gotten to that point, though.

Iowa State did not play well enough to deserve to win the football game, but they had a chance to do so anyway. That fact should give some hope to fans who might start to turn sour on this young team with seven games left in the regular season.

This team has to get better soon, though. This offense needs to get back to being the explosive and efficient unit we saw flashes of during the early parts of the season.

The Big 12 is too damn good for Iowa State to shoot itself in the foot week after week. Kansas State and Texas, Iowa State’s next two opponents, will be capable of taking advantage of these mistakes the Cyclones keep piling on themselves.

Now, against all odds, even Kansas is, too.

“Man, you wish you could play complementary football,” Hutchinson said. “It just didn’t happen today. Personally, felt like we should have played better. Our defense came out there and played amazing and kudos to them. Next time, we just have to play better.” 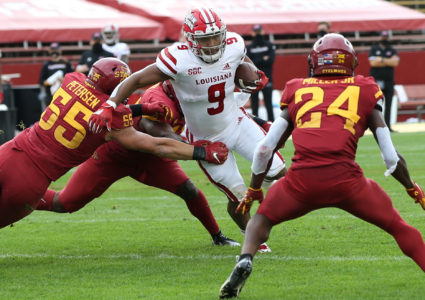 STANZ: Ability to fix mistakes “in the margins” could define ISU football in 2020 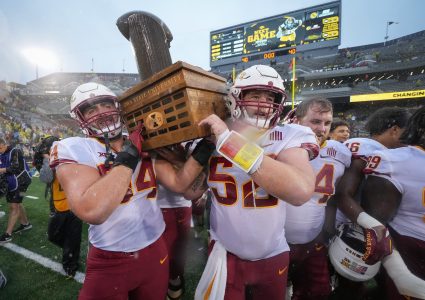 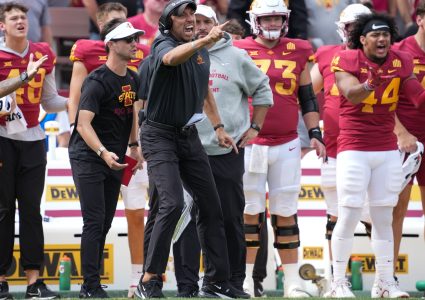