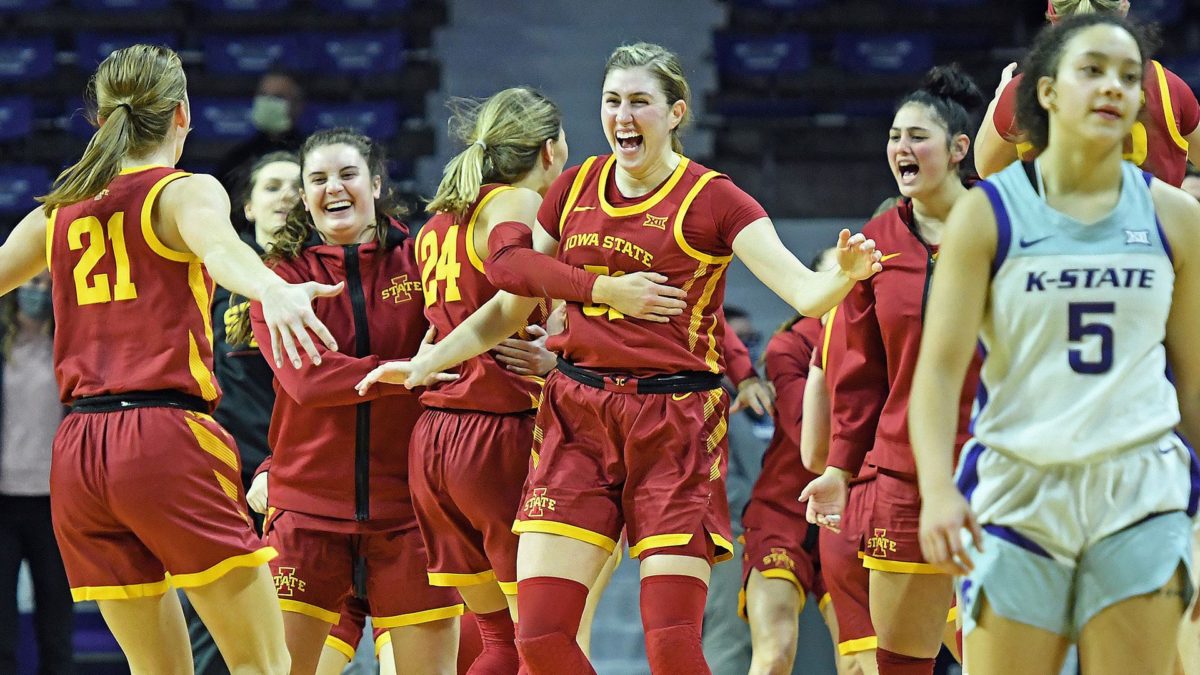 There aren’t a lot of things that can beat an opposing player putting up 38 points on the other team, but Maggie Espenmiller-McGraw and a banked-in 3-pointer did on Tuesday night.

The Cyclones fought back through the entirety of a grit-filled second half, to set up her game-winning shot in the 73-70 victory on the road.

“I don’t even know,” Espenmiller-McGraw said postgame on the Varsity Network. “It happened so quick. The play was for (Lexi Donarski) to make a drive and I called for the ball. Lexi made a great pass, it went in thankfully.”

Leading the way for the Cyclones was Ashley Joens, who ended the night with 27 points and became the third player in school history to eclipse 2,000 points.

She joined other double-digit scorers in Espenmiller-McGraw with 12, Donarski with 13 and Beatriz Jordao, who ended with 12 points.

Each played a big part in contributing to the comeback victory, one where Iowa State hadn’t led since it was up 3-2 in the opening minute.

“I think it just says a lot about how much we believe in each other,” Espenmiller-McGraw said. “I don’t think I’ve ever been on a team before that’s this close. We trust each other.”

Every player on the court played a part in getting Iowa State back in that game.

If it wasn’t for Espenmiller-McGraw’s big shot, Morgan Kane‘s 3-pointer earlier in the second half would have defined that win.

“Yeah no that was a huge play from (Kane),” Espenmiller-McGraw said postgame. “We needed someone to step up. Coach gave her the green light right before that play and she let it fly.”

Kane caught the ball on an inbounds play late with just over a minute left on the clock. Iowa State was down by four points.

Not one of the five players in Kansas State jerseys thought that Kane would put up the 3-pointer that she made, but the breakout player for the Cyclones this year came through when they needed it the most.

“I said (Morgan) if you’re open, will you make it and she said ‘Give me the ball coach, I’ll make it,'” Iowa State coach Bill Fennelly said after the game.

That she did, and all that transpired on Tuesday night to give Kansas State the leads that it had swung back in Iowa State’s favor.

The victory pushes Iowa State to 4-0 in the Big 12 conference, putting it in a standalone spot atop the standings.

It all comes on a night where Kansas State’s Ayoka Lee powered the Wildcats to an 11-point, first-half lead.

Of Lee’s 38 points, 24 of them came in the first half, matching Iowa State’s total in the first 20 minutes of action.

“I thought the whole second half, we played pretty well offensively,” Fennelly said. “I really thought coming out to start the third quarter, we played two really good minutes and everyone kind of calmed down.”

The only thing that could slow down Lee was getting her into foul trouble. The Cyclones drew three fouls on the Wildcat star with a pair of minutes remaining in the third quarter.

It sent Lee to the bench, and even though Iowa State wasn’t able to capitalize on the scoreboard during that time, it got Kansas State off of its game.

Lee didn’t touch the ball on the first six possessions of the final quarter. That got the team back in it and the rest went down in a wild way.

“I’m a firm believer that, when the year is over, there are four or five games in a season and depending on which way they go, it just dramatically changes your record,” Fennelly said. “I think this is one of those games.”

Iowa State will take the court for its fifth Big 12 game of the season on Saturday, facing off with Oklahoma State in Stillwater.