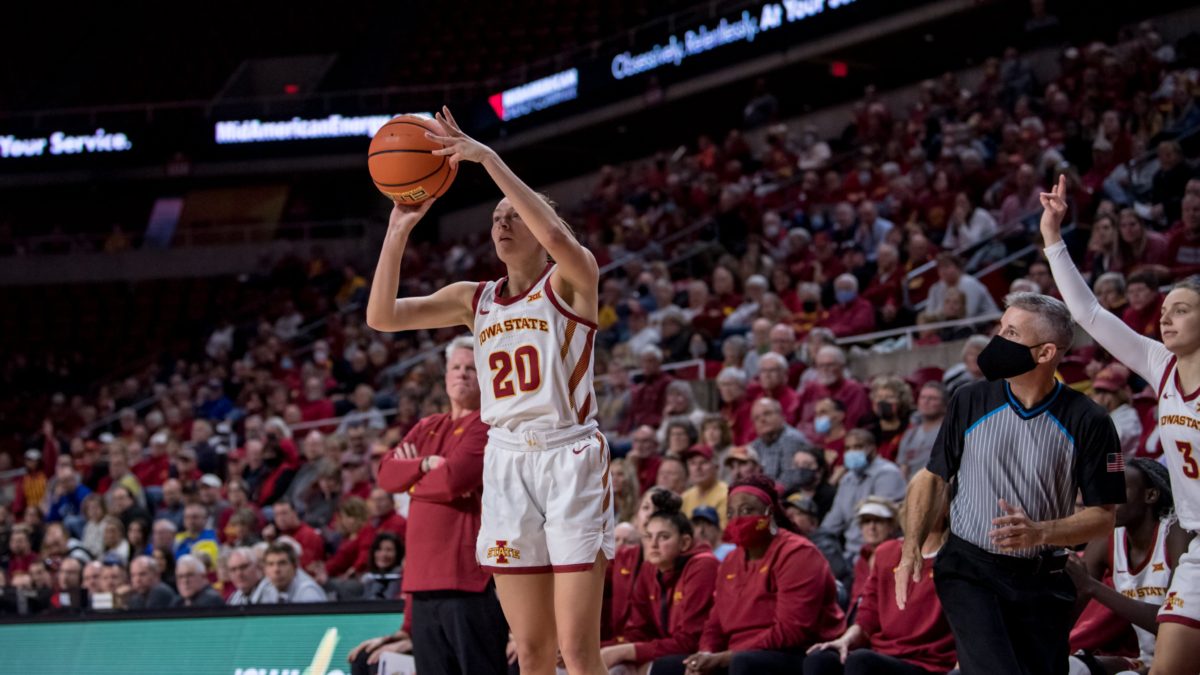 We’re only two official games into the Iowa State women’s basketball season, but the Cyclones have already made a statement on the floor.

In the second contest of the season, coach Bill Fennelly’s team put the clamps on South Dakota State, a Summit League power that Iowa State lost to a year ago, beating the Jackrabbits 77-56 at Hilton Coliseum on Monday.

“Coming on the heels of what we did against Omaha, we couldn’t have guarded any better,” Fennelly said. “That’s a game that means a lot to us in the sense that you beat a really, really quality program.”

Utilizing a gritty defensive game on top of standout performances on the offensive side, the No. 14 ranked Cyclones blew out a team that was receiving votes this week in the AP Top 25.

It was the second straight game that the team held its opponent to less than 60 points.

With an in-state game on the road looming this Thursday, a win over South Dakota State is something to build on.

“To play the way we did for 35 minutes is a testament to their effort,” Fennelly said. “We (practiced hard), my staff did a great job with their scouting report. I’m really proud of our team and it’s a good start to a really tough week.”

Emily Ryan ended the game with 12 points and five assists but might have been more instrumental with her four steals.

The sophomore from Kansas on multiple occasions forced a turnover from SDSU to streak to the other end and convert on an and-1.

“Every game we can play, especially here at Hilton, is important to us,” Ryan said. “It was a little more important this year after the loss last year. We wanted to prove that we could beat them and we played well enough to tonight.”

With herself, Lexi Donarski, and Ashley Joens each recording over 35 minutes of playing time during the game, this win reveals the improvements the core group has made.

Donarski led the team with 22 points and Joens put up 17 after starting just 1-10 from the field.

“Like Coach (Fennelly) said, they’re a very well-respected program,” Donarski said. “We know that they’re solid every single year, so it’s a really big team-win for us.”

If Fennelly was going to hand out a game ball, however, it would be going to Aubrey Joens.

She came home with nine points and nine rebounds on the night, despite her size disadvantage.

“That might have been Aubrey Joens’ best game at Iowa State,” Fennelly said. “She guarded, she made shots, she got rebounds. She weighs 120 pounds, soaking wet…But she’s got the Joens’ DNA.”

While the younger of the Joens sisters was on the floor for more than 31 minutes, Iowa State’s Izzi Zingaro and Maggie Vick combined to finish with just seven minutes on the floor.

These were no injury issues, however.

Fennelly said that the matchup provided Iowa State with more of a size advantage than it is used to, so they opted to run Morgan Kane at the spot for over 20 minutes and at times utilized a five-guard lineup.

“We went with (Vick), because we just thought that matchup-wise, that was better,” Fennelly said. “(Kane) came in and took advantage of her opportunity. Every game it’s going to be someone different. It’s going to be by-committee, and I know everyone is going to get tired of saying that. We don’t have a legitimate, no-doubter starting 5-man. We just don’t have it, and that’s okay, we’ll embrace what we have.”

The small-ball strategy actually allowed them to turn a 10-point, fourth-quarter advantage into a 20-point one as they closed out Monday night’s game.

That lineup could see the floor a lot again on Thursday night, as Iowa State will go up against Drake at the Knapp Center.

The Bulldogs were downed on Monday night by South Dakota at home, but Iowa State won’t let that impact how it prepares.