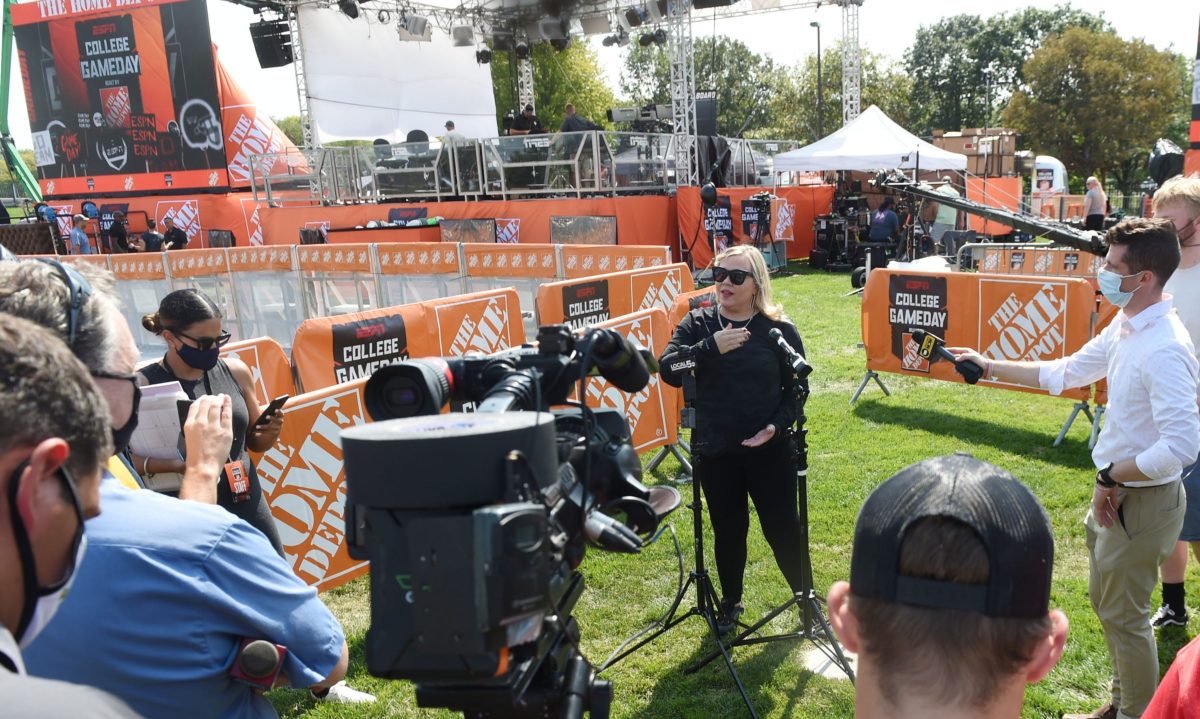 And both were able to reflect yesterday on their relatively obscure beginnings and subsequent ascensions to national prominence.

“I don’t think you guys can understand how cool this is,” Rowe, a recent guest on our Title IX Podcast, told reporters in advance of Saturday’s 3:30 p.m. matchup between the No. 9 Cyclones and tenth-ranked Iowa at Jack Trice Stadium. “So, the last time I covered a Matt Campbell game where he was on the field and I was on the field, he was playing for a national championship for Mount Union. So I feel like — you know the old Drake lyric? We started at the bottom, now we’re here? That’s me and Matt Campbell. We talked about it at practice yesterday. ‘Look at us. Oh my gosh. We both have come such a long way.’ I just think it’s awesome. It’s totally cool.”

Campbell was part of three national championships as a Purple Raider (1998, 2000, 2001. Rowe covered the last two and remembers Campbell as a “terrific player.”

“He was a good linebacker,” said Rowe, who is in Ames to cover the game with ESPN College GameDay as well as the national ABC broadcast. “No. 89.”

Now, Campbell has the Cyclones positioned to follow up the program’s best season with an even better run — one that would be greatly enhanced with his first win over the Hawkeyes.

“Iowa State, with as good as they have been, and as good as the program is, you need to beat your rival,” GameDay host Rece Davis said. “I think it can really elevate their stature. They’ve beaten Oklahoma. If you can beat Oklahoma you can win championships, but you need to beat your rival. And I think it’s really important (for Iowa State) and I think the energy will reflect that on Saturday.”

Rowe is hoping that energy will rival so-called Hilton Magic when the ISU basketball program is at its best. She’s experienced that many times and it will serve as the barometer for her assessment of the Jack Trice Stadium experience.

“I’m not gonna lie, I’m gonna be very judgmental tomorrow because I will be comparing it to Hilton,” Rowe said. “Iowa State vs. Kansas in the heyday. It’s chaos. And I can’t wait to see if this feels the same, or how this compares because Hilton Magic is the real deal. I believe in it. I’ve lived it. So — do we have a nickname for Trice? Trice is nice? I don’t know, we need a fancy Hilton magic nickname for Trice, or maybe you have to earn it tomorrow.”

Rowe lives part-time in Utah and describes herself as a “lifelong” BYU fan. That makes today’s Big 12 announcement that BYU, Central Florida, Cincinnati and Houston have been accepted into the league beginning “no later than the 2024-25 athletic season” extra exciting for Rowe.

“I think it’s awesome for BYU,” Rowe said. “I always mourn the (end of) the old WAC (Western Athletic Conference) days. I grew up covering Air Force, BYU, Utah in the old WAC days when the WAC was a premier conference in this country. I’ve been sad ever since that split up and those great natural rivalries split up, so for me, it’s a big deal. I grew up as a lifelong BYU fan. If you guys need to know any history about BYU, I’m here for you, my Big 12 brethren and sisters. But BYU is a huge deal. They’re a big program. … I just wish we would have added them sooner to the Big 12, to be honest with you.”

Davis said adding the aforementioned four schools helps the Big 12 “make the best of a difficult situation” that was precipitated by Oklahoma and Texas’s planned move to the SEC.

“Those four schools that they’re adding are really good programs and a couple of them, UCF in particular, with a huge enrollment and burgeoning alumni base that they’re getting from that over the years has an incredible ceiling,” Davis said. “Cincinnati, I think, does also and then Houston and BYU certainly — the Big 12’s already in the Texas market, but it gives you another brand name with some history in the Texas market. And BYU has a very loyal following.”

“That said, I’m not going to sit here and be disingenuous and tell you that it is the same because it is not,” Davis said. “It is sort of like, it’s a lighter version of the Big 12 or maybe a turboed-up version of the American, which is not a bad thing. I’m not being insulting when I say that because you’ve got a lot of really, really good in this new alignment with this new group — a lot of really good, but you haven’t got anything in there that’s proven to be consistently great. Maybe that provides an opportunity. Maybe that lets Iowa State take it — I mean they’re already at a very good level, but maybe they take it to another level. Maybe that allows a UCF and Cincinnati not to have to answer the questions of, ‘Well, you had all these programs that you beat that aren’t quite to the level of the power five.’ So I’m not going to sit here and say that I think it’s just as good, but I do think it’s making the best of a difficult situation.”

We all know how important All-American tight end Charlie Kolar is to ISU’s offense and so does ESPN analyst Desmond Howard. He, like all of us, assumes Kolar will play Saturday after missing the season opener and named him as a key player to watch.

“I just think the Cyclones’ offense operates at a different level when Kolar’s in the game,” Howard said. “I thought they missed him last week. He’s a difference-maker. I believe he’s Brock Purdy’s security blanket. He has that chemistry with him and they’ve played a lot of snaps together, so he knows he’s gonna be where he’s supposed to be. If you have that, there’s just an air of confidence that you can play with on the field. So to see their offense with Charlie playing would be something to look at.”

Rowe said she’s always amazed by how friendly Iowans are — whether she’s in Ames, Iowa City or spots on between.

It’s just like, oh my gosh, the Iowa people are always so kind and loving,” Rowe said. “The Hawkeye fans are so great to me. The Iowa State fans are so great to me. And then I see Twitter and social media and I realize they’re just not nice to each other. So Iowa fans, Iowa State fans are the nicest people in the world unless they’re playing, so that’s what I’ve realized. I think ‘hate week’ is a real description.” 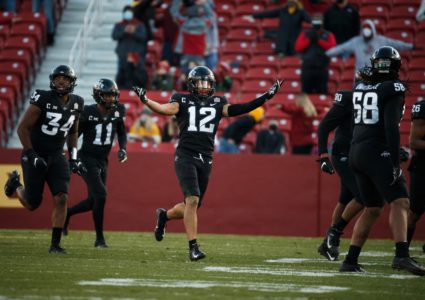 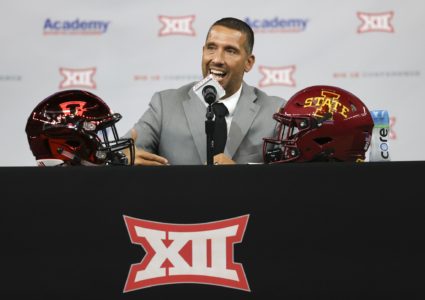