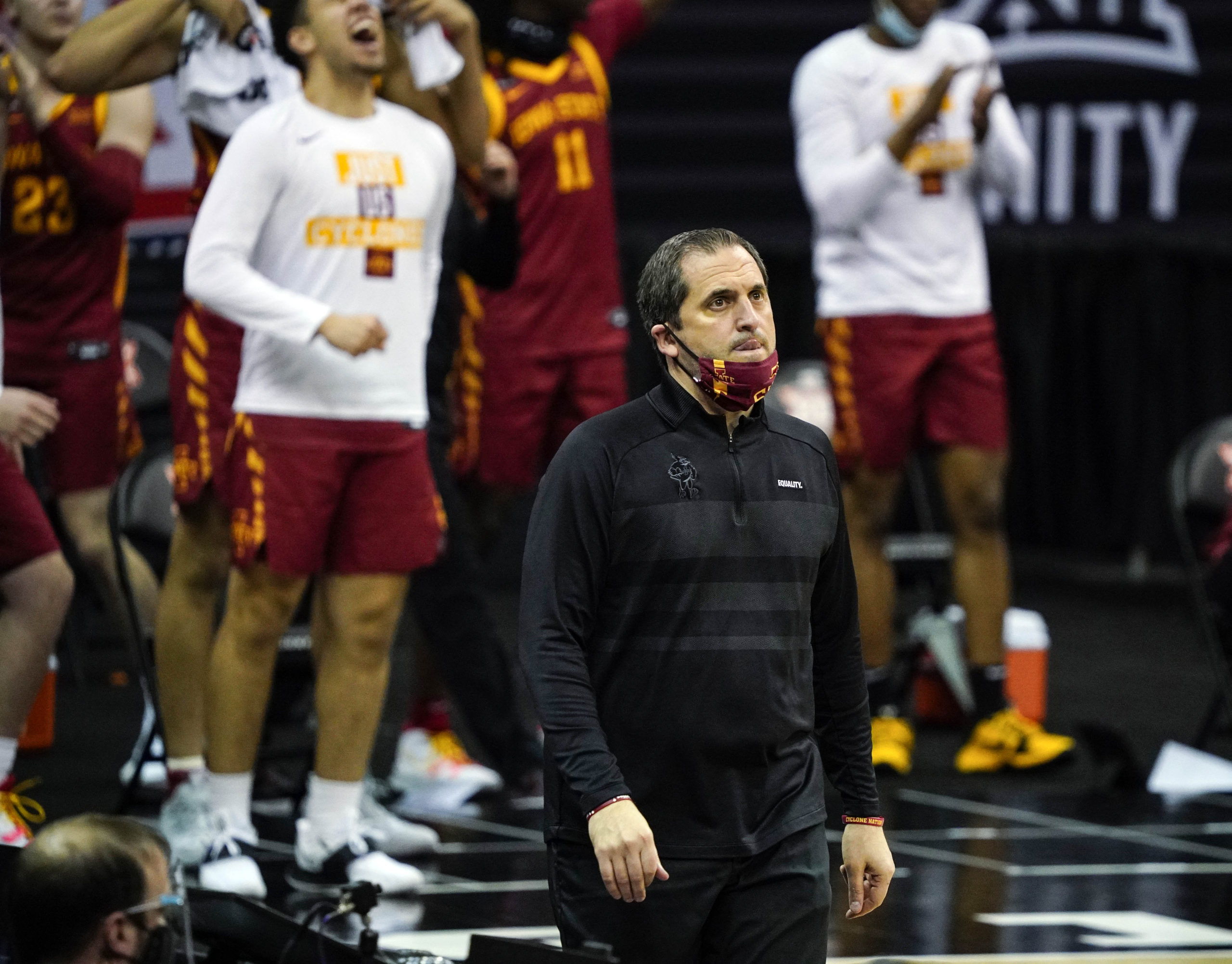 Iowa State’s nightmare of a 2020-21 men’s basketball season is over.

That became official shortly before 10:30 Wednesday night when the final buzzer sounded on the Cyclones’ 79-73 loss to No. 25 Oklahoma in the first round of the Big 12 Tournament in Kansas City.

The loss extended Iowa State’s school-record losing streak to 18 games and ended its season with an overall record of 2-21. It is only the fourth time in program history with two or fewer victories in a season and the first since 1924-25.

That wait centers around Iowa State athletic director Jamie Pollard and his decision on if head coach Steve Prohm will return for his seventh season at the program’s helm or if he’ll be relieved of his duties and a search for a new coach will begin.

This wait could potentially stretch into next week when Prohm is scheduled to meet with the AD to discuss his future with the program. Pollard is currently in Indianapolis fulfilling his duties as a member of the NCAA Tournament selection committee ahead of Selection Sunday this weekend.

“I’ll meet with Jamie next week and we’ll sit down and talk,” Prohm told reporters after the game. “Jamie and I have had conversations. Like I’ve said, we talk all the time. But, Jamie’s obviously got a lot going on with the selection committee and different things like that to where we’ll meet next week. That’s the most I could tell you with that and I’m being open the best I can.”

The loss to the Sooners brought an end to a four-year stretch in which Iowa State ended three seasons with sub-.500 records while the one season with a winning record is widely regarded as a disappointment and featured a 9-9 record in Big 12 play despite what was considered one of the nation’s most talented rosters at the time.

It is hard to deny the facts when you consider how swiftly and sharply the program has descended towards the bottom of the Big 12 after the most successful six years in its history. The Cyclones are just 50-72 overall and 18-54 in the Big 12 during the last four seasons with one NCAA Tournament appearance and zero NCAA Tournament victories.

Now, you enter the offseason having lost 23 consecutive games against Big 12 foes and not having won a road game since mid-February of 2019.

“We all know that this record is unacceptable for this program,” Prohm said. “I’ve said it 100 times. I’ve said it since I got here. We’ve got an incredible fan base. We’ve got great leadership. Ames is an unbelievable community. It’s the best league in the country. We were playing a seven seed that’s a top-25 team in the country.”

“But, with that, there’s expectations to be in the NCAA Tournaments and play deep into the postseason whether that’s Sweet 16s or Elite Eights. I think that’s the next step.”

The process of getting the program back anywhere near what Prohm considers those next steps to be is going to be a challenging one, regardless of if he’s the one at the helm or not.

Despite having only two contributing seniors, it became clear throughout the season this team was out-manned on a nightly basis in the Big 12. Sure, they fought and clawed like hell, coming up short time-and-time-again, during Big 12 play, but the talent needed to compete at a consistently high-level in this league just is not there.

Wednesday night’s game against the Sooners was a perfect example of this fact. Oklahoma was able to race out to a 19-point lead with 12 minutes left in the second half after Iowa State had kept the score relatively close for the first 28 minutes of the contest by simply being better than the Cyclones in every phase of the game.

Iowa State continued to struggle offensively with the intermittent several minute long scoring droughts that hampered this squad all season long. Oklahoma took advantage of those moments because that’s what good teams do, especially good teams with players like Austin Reaves, who scored a game-high 21 points on 11 shots.

Rasir Bolton did the best he could to pull Iowa State back within striking distance, scoring all of his team-high 18 points after the intermission, and appeared to get the Cyclones back within two in the final minutes before what was originally ruled a 3-pointer was determined to be a two-point shot.

If that’s not a perfect encapsulation of how frustrating this season was then I don’t know what is.

“I told the guys in the locker room, through all the adversity and things they had to deal with, and especially the way the game was going tonight, they could have folded it in many times,” Prohm said. “I think we’ve got great kids in our locker room and great character guys. They’ve done the right things all year. So, that’s as a coach and as a leader, that’s why you’re disappointed in yourself because the best part of coaching is to be a blessing to sit back and watch your kids have fun and enjoy these moments, especially in March.”

“That’s the best part of being part of championship teams, winning big games, seeing smiles on those kids’ faces. Oklahoma was good and we made it a game at the end, but just didn’t do a good enough job sharing the ball and running good offense at time and they’re a very good one-on-one team.”

The program can expect highly-touted freshman center Xavier Foster to return to the fold after sitting out the majority of the season due to surgery on a foot injury he suffered in high school. George Conditt showed flashes of his potential towards the tail end of the season and still has a considerable amount of room to grow prior to his senior season.

Ole Miss transfer Blake Hinson, who missed the entire season after joining the program last summer, will enter the fold as well.

There are pieces still on this roster entering next year, but attrition and roster shuffling have become nearly as big a piece of college basketball as student sections and home court advantages. That was the case even before the changes to transfer legislation expected to come later this year, making the first-time transfer market open season full of immediately eligible players.

Iowa State could benefit from those changes, because the roster needs an infusion of talent, both in the front and backcourts. There will surely be more talent available this offseason than in any other.

Bolton is the team’s only proven shot-creator and is not a natural point guard. Adding four-star freshman Tyrese Hunter should help in that regard, but this team needs someone who has shown they can do it at the collegiate level if they hope to return to contending for an NCAA Tournament bid next season.

As well regarded as Foster was during his stellar prep career at Oskaloosa High School, he’ll still be a redshirt freshman with zero Big 12 experience and only sparing collegiate experience. Conditt remains a wild card after an up-and-down two seasons that saw him look like a potential future pro at times and like someone who didn’t belong on the floor in Big 12 games at others.

Those two will need help down low if the program in its current form is going to take any strides forward next season, especially with the loss of Solomon Young, who, to his credit, snagged a career-high 12 rebounds in his final game as a Cyclone.

But, the unfortunate reality is the program could be severely hurt by the transfer changes as well when you consider how the last several seasons have gone. Without speculating on names, it would be hard to imagine a world in which all of those pieces are still on this roster next season.

That’s just the world of college basketball in 2021. That world is even harsher when you’re a program that has won only 18 conference games in the last four seasons with none of them coming in the most recent campaign.

Navigating these realities is going to be a difficult task and it is why I will write tonight that I just do not see a path back towards relevancy with Prohm as the leader of the program. I have done my best (probably didn’t do it very well at times) to wait until after the season before making my final judgement and stating my opinion. We’ve just seen this movie of reshaping a large portion of the roster during the spring play out before during his tenure with little to no success.

While the possibility things dramatically shift and momentum returns to the Cyclones’ side does exist, so does the possibility of sliding even deeper into the Big 12’s basement and setting the program back even further.

How far can you afford to fall before complete apathy within the fanbase sets in and you’re facing a long rebuilding process that holds the program back from competing for years?

These, along with Prohm’s roughly $5 million buyout, the buyout for any new coach and the athletic department’s reported $25 million budget shortfall, are the things Pollard must weigh when he has an opportunity in between comparing the resumes of bubble teams in the coming days.

“The biggest thing I’ll say is we all know that this program can’t be in this position,” Prohm said. “It’s got to get back right.”

The quest to get Iowa State men’s basketball “back right” and whatever that may entail will begin soon.

Finding out what comes next will require a wait. 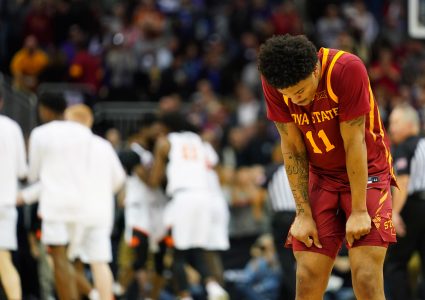