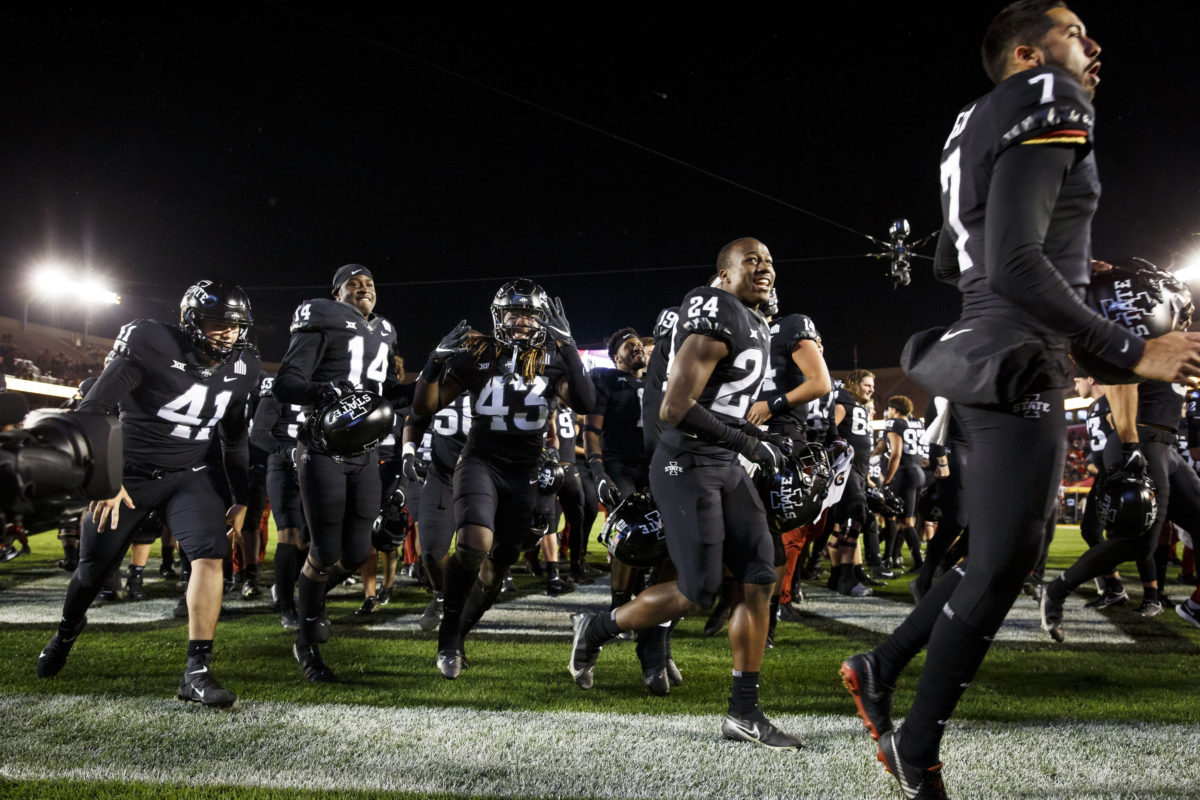 AMES — Kene Nwangwu has always been blazing fast. A “speedster,” as fellow Iowa State running back Breece Hall calls him. A “leader,” as Cyclones head coach Matt Campbell often refers to him.

Saturday against No. 18 Oklahoma, the senior return man slowed by injuries most of his career added another positive label to his personal collection: Game saver.

The Cyclones surged away from the Sooners from there, notching a 37-30 Big 12 win that was historic for both teams — and euphoric for 13,724 fans who attended based on COVID-19 based social-distancing protocols.

“If you ask me, that’s the play of the game,” Campbell said of Nwangwu’s clutch return that set up Brock Purdy’s two-yard touchdown. “If that doesn’t happen, I don’t know what the outcome is, but I think that play was the difference in the football game.”

Yeah, that’s historic. But so what? Campbell wanted to spotlight seniors such as Nwangwu after the Cyclones pulled into a three-way tie for first place in the conference standings with Kansas State and Oklahoma State.

“I think so much is not being talked about with our senior class,” Campbell said after beating Oklahoma for the second time in four seasons. “Again, I’m going to remind everybody, you’re talking 16 seniors and the bulk of that senior class came to Iowa State when Iowa State was the laughingstock of college football. Chase Allen, JaQuan Bailey, these guys came to Iowa State when we were 3-9 year one and a couple of consecutive years of what was going on and really what we sold was a vision of hope.”

They’ve taken that hope to new heights, but as Campbell and Purdy noted in the postgame news conference, consistency remains the stumbling block for ISU — even after an historic win such as this one on a “game of the week” stage.

“We still have a lot to look forward to,” said Purdy, who averaged 21.7 yards per completion and connected with Xavier Hutchinson for a 65-yard touchdown strike. “As long as we have that confidence factor moving forward each week and every single day at practice and everything, that’s huge. We’re gonna build off it.”

“Just because we beat Oklahoma, we’re not gonna go, ‘All right, the season’s done,’” Purdy said. “We have so much to play for still. We’re gonna look ourselves in the mirror and get better.”

Purdy went 12-24 for 254 yards while exploiting the Sooners’ dogged determination to stop the Cyclones’ running game — a gambit that mostly worked in the first half.

But Hall and strong blocking from the line and tight ends changed that. The swift and powerful sophomore rushed for 100 of his 139 yards in the second half.

His ankle tackle-breaking 36-yard run set up his 8-yard touchdown that capped the game’s scoring with 4:06 left.

“Great blocking from the O-line,” said Hall, who is the first Cyclone to start the season with three straight 100-yard rushing games since the late Ennis Haywood accomplished the feat in 2000. “They were just pounding, so I just shot through there.”

The Cyclones still needed a stop, however.

“It was man coverage,” Young said. “I had deep middle. I know (fellow safety) Greg (Eisworth) was locked up with a man. I got deep. I made a play.”

Hall fully sealed the win by running for a first down moments later and the Cyclones went into victory formation as the small, but ebullient crowd broke into celebration amid strains of “Sweet Caroline.”

“Offense and defense, we were playing our best football at the same time in the second half, so just to see everything come together was real (good),” Hall said. “Once you get in the locker room, you know it’s going to be fun.”

Nwangwu and several other ISU seniors made sure that synergy would pop when it mattered the most.

“Our backs are against the wall and it’s Kene Nwangwu,” Campbell said. “A senior that’s really been through hell and back in terms of the injuries and fighting through what’s occurred for him. A guy that’s just stayed the course. He’s kept fighting. He’s kept growing. He hans’t given up and that’s what seniors do who have stayed the course.”