After having no set plan following his time competing in Ames, Miklus was finally offered an assistant coaching position at Michigan State University. The offer came just a little more than a year after finishing his collegiate wrestling career.

Ahead of his senior night at Iowa State, Miklus met with the media and he was asked about his future plans. He shared that his desire to coach started when he was a junior in high school.

“It’s pretty much the only thing I’ve wanted to do since I was a junior in high school. I don’t want a real job per se. I don’t really want to put on a shirt and tie and go to work. I like wrestling and I like coming and playing games and just doing what I love to do,” Miklus said back in Feb 2019.

The application process was new territory for Miklus. When first approached by Iowa State head coach Kevin Dresser about the opportunity, the four-time All-American wasted no time in reaching out to the coaching staff in East Lansing.

Miklus was helped by the Iowa State coaching staff, friends and mentors in preparing for his interviews. He was told to make sure to have a lot of questions to ask since his interview process was different from the usual coaching interviews due to COVID-19. He wasn’t able to visit campus or officially meet everyone until after receiving the offer.

“It was a three-hour time slot but I showed up with like 90 questions. (Brent Metcalf) had told me to make sure I had questions, knew things about everybody and just be ready and be prepared,” Miklus said. “I was always, ever since I was a little boy, had questions about everything. I reached out to different people to help me organize my list so yeah my interview took four hours. I thought it went well.”

Although this was all new to Miklus and nerves were present as an unexpected opportunity landed in his lap, his former coaches, Dresser and Metcalf had confidence this would work out in his favor.

Unfortunately for Iowa State, they’re not in the position to offer Miklus a permanent position so it was a no-brainer for Dresser to refer the former Cyclone when he was first contacted by Michigan State about looking for a guy to coach the weight classes 174-197.

“I reached out to Willie and said, ‘I don’t want to lose you.’ I also think it’s my job to give guys the best opportunities possible for them,” Dresser said. “I just really felt like he had a chance to jump in and get a full-time D1 job. As a young kid that’s not easy to do. It’s a lot about talent but has a lot more to do with timing and this was a good chance for him to get his foot in the door because we didn’t really have a full-time position to offer him.”

Miklus only spent two years with Iowa State but in those two years, he made a lasting impact with a positive attitude and the power to keep things light in a high-intensity sport.

“You’re getting really high character, unbelievable positive energy for your program every single day,” Metcalf said when discussing what the Spartans gain from a guy like Miklus. “He’s going to bring smiles to people’s faces and when it comes to wrestling he’s going to ask and demand a very good and entertaining style of wrestling. He’s going to love it all and have a lot of fun with it and it will bleed into that team. He’s that powerful of a person and personality and you can’t help but be happy and enjoy what you’re doing when you are around him.”

When Dresser was asked what he will miss the most about Miklus it came back to the energy he brings to the room to bring people together.

“All wrestlers, your self-confidence and your ego can be your best friend or your worst enemy. Willie, he’s confident but he’s not arrogant. He treats people the way he likes to be treated and that’s a good motto to live life by especially with all we’re going through right now,” Dresser said. “Willie coming in was a three-time All-American, it would’ve been really easy for him to come into our program with a chip on his shoulder and thinking he was better than anybody. Because when he got here we had zero All-Americans in the room. But, he came in and was a team guy right away. He wanted to help guys and checked his ego at the door. Honestly, he didn’t even have to check it in because that’s just the way he is: very humble, no-nonsense, get to work kind of guy. But yet he’s still very outgoing.”

When Metcalf thought back on his favorite memory of Miklus it was a no-brainer: watching Miklus become a four-time All American.

“It was a pretty emotional thing. He got that win and secured that All-American status. There was a lot he was going through in that whole year that wasn’t easy. He was upset in that second round and a lesser man would’ve put their head down and given up,” Metcalf said. “But for him to suck it up, and even though he knew he wasn’t going to get a national title and knew he wasn’t really going to be able to contend for what he wanted out of his career he finished it the way he wanted to. It was powerful and unbelievable. He was bawling so I was bawling and it was early in my career so it was powerful to have that in that first year. I am so proud of him and what he was able to do.”

Miklus lost his father two weeks before he went on to compete in his final NCAA Championship.

When Miklus received his offer letter for the position, his mind automatically went to his father.

But, Miklus feels ready for his new chapter and he knew it the moment he was finally able to set foot on campus in East Lansing.

“They’re a super tight-knit and family-type feel on the staff. When I met a few of the guys while I was out there they were super close and you could tell they were best buddies and the way they interacted with the coaches you could see it was a really good relationship. That’s the biggest thing that excites me about them is the culture that they have in that program is really good right now and the relationships they have with their athletes are very good. It’s definitely going to be an exciting place to work and try to help raise the level of the program,” Miklus said.

Both of his former coaches praised his ability to learn quickly and bring a unique style to the room from being a younger guy that will hugely benefit the culture of Michigan State.

“In the one year he served as a coach with us his willingness to train and workout multiple times with guys to make sure they all had partners was huge. He was such a team player from the get-go. When he wrestled he was goofy. In pressure situations, the young guys saw you could go out and have fun. This can be fun and you don’t have to be serious all the time. He kept things light. You’ll see that sometimes at the highest level of sport that a lot of success can come from keeping things light,” Dresser said.

When pondering the thought of who he hopes to be when he walks out of his first season of coaching the main thing that stuck to his head was being someone who learns.

“I want to be more experienced. I want to learn as much as I can. Do’s and Don’ts. Hopefully not making too many mistakes. Ask questions. Figure out my style of coaching. I just hope to be somebody who learns,” Miklus said. 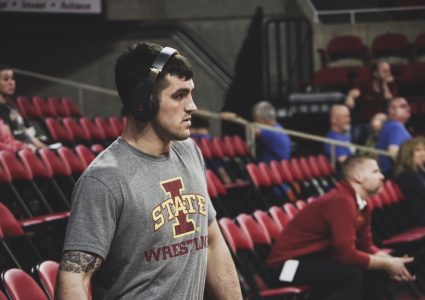 CFTV: Willie Miklus on what it will be like to face his former team