Iowa State coach Bill Fennelly stated in his teleconference on Thursday that his team might play its toughest schedule ever in its upcoming season.

When asked about any details he could share, Fennelly revealed that the schedule will include a game against the current No. 1 ranked South Carolina Gamecocks.

“I am just hoping our kids are doing the things they need to do to be ready to go, because we are going to play the toughest schedule that maybe we’ve ever played here,” Fennelly said.

The game will be part of the annual Big 12-SEC challenge and may very well happen at Hilton Coliseum.

South Carolina hosted Baylor in the challenge last season, while Iowa State went on the road to face Alabama in the event. Though it’s not written in stone that the conferences avoid sending teams on the road in the challenge in back-to-back seasons, they tend to stay away from it.

South Carolina is the projected top-ranked team in ESPN’s Way Too Early Top 25, and the Cyclones actually come in at No. 16.

Fennelly also confirmed the inclusion, again, of the three games against in-state rivals for the 2020-21 schedule.

The Iowa Corn Cy-Hawk Series will continue in Iowa City. Iowa State played Drake at the Knapp Center last year, so expect to see the Bulldogs at Hilton and the Cyclones at the McLeod Center against the Panthers.

Fennelly additionally mentioned the possibility of a preseason, or early season, tournament that will be notable.

“We’re trying to put a tournament together in Florida that will be one of the best, if not the best preseason tournament in the country,” Fennelly said. “So, we’re working hard on that. We’re trying to finish (completing the field of teams).”

Although there are challenges to filling out the schedule, like every year, this year has been unique.

The COVID-19 outbreak in the United States has changed the plans and shifted the course of how some things have played out. Regardless, Fennelly wants to have his team ready to play.

“Obviously, everyone is kind of in the same boat, not knowing exactly what they want to do,” Fennelly said. “Every school is a little different. Originally, we had plans to play certain places and go certain places – and some of those things haven’t worked out, but it will be very, very good and we’re looking forward to being ready to face it.”

WBB: Cyclones will focus on themselves against No. 1 South Carolina 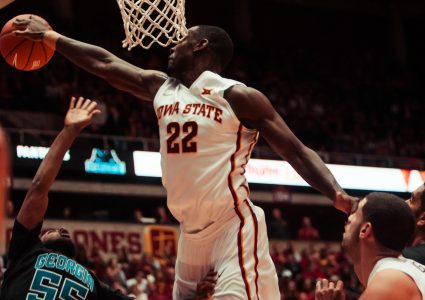