The Iowa State women’s basketball team isn’t going to be focusing on South Carolina when the Gamecocks come to Hilton Coliseum on Sunday (11:00 a.m. ESPNU).

The Cyclones will be focusing on what they can do and how they can play against the top-ranked team in the nation.

“We have to play the way we play,” Iowa State coach Bill Fennelly said. “They’re big. They’re strong, physical. Hopefully, we’re ready to go. Our focus is and always has been to control what we can. That’s been the mantra all year. I thought we played a really good practice today and I think our kids are excited for the opportunity.”

It’s the same mantra that Fennelly preached a season ago when the Cyclones knocked off No. 2 Baylor at Hilton Coliseum in what ended up being the team’s final game before the pandemic hit.

Sunday will bring a new challenge.

However, that won’t stop Iowa State from taking at least some of what they learned in its Senior Day win from last year.

“(I’ll) take a little bit from (that game),” junior star Ashley Joens said. “It took the whole team. We have to stick together. I think it was the second quarter – we didn’t score a single field goal. Just being able to stay together and play defense to stay close (is important).”

Joens emphasized her team playing well enough on the defensive side of the ball to remain ‘in the game’ if the offense stalls.

That’s how the team got through to the halftime break against Baylor last season before turning things up in the third quarter.

This team, though, has four freshmen that will be playing only their fourth game in their college careers. They weren’t on the court when the Cyclones defeated the Lady Bears.

Each of Iowa State’s three games this season has yielded a different type of play from the Cyclones. That’s normal, especially considering the time frame of the season.

However, the starting lineup and rotation hasn’t budged at all this year, and Fennelly was adamant that it will remain.

They aren’t changing anything up for their top-ranked opponent.

“Ashley (Joens) and Kristin (Scott) are going to play until they can’t stand up,” Fennelly said about his two upperclassmen that are on the court for the tipoff. “Four of our next five players are freshmen. So, I could get mad and want to bench the freshmen, but we only have 10 players and four of them are freshmen.”

The spotlight will be bright for the group on Sunday. The opponent is the best competition they’ve ever played against.

That’s why they – the best recruiting class in school history – came to Iowa State.

“I trust them,” Fennelly said. “I believe in them. That’s why they are here. We’re going to let it rip and see what they do. They came here to play in these (types) of games and they need to play.”

Each of the freshmen has progressed so far, including Emily Ryan, who went for three points, six rebounds, six assists, two blocks and a steal in 20 minutes against TCU.

“I don’t know if we’ve discussed (playing the top team) necessarily just as us freshmen, but I know we all are excited about how we played at TCU,” Ryan said. “We want to take that and have momentum going into this game. We’re just trying to get better every day at practice and hopefully that corelates to the games.”

Ryan hit her 3-pointer in the first minute of the game to open up the scoring for the Cyclones against the Horned Frogs.

The other shots started falling shortly after, with the team connecting on 58% of its shots in the first half to go into the break with a 22-point lead.

It took a team effort to do that, Joens said after the game. She thinks that it will take the same effort on Sunday.

In a year where games were being canceled left and right and schedules fluctuated up to a week before the season started, keeping this one on the slate is a major win in its own.

That’s just like playing any game this year, Fennelly says.

“Every chance we get to play a game, in my mind, it’s a win,” Fennelly said. “These kids want to play – it’s about their mental health and the work they’ve done. Then, the opportunity to play against the best team in the country – a team that most are picking to win the national championship.”

Iowa State will try for another upset while on center stage at Hilton on Sunday, under the lights of a nationally televised broadcast. They’ll try to perform with a different cast, but the goal will always go echo the same message.

They’ll try to play the Iowa State Way, and if they do, they’ll have a chance to knock off a top team again. 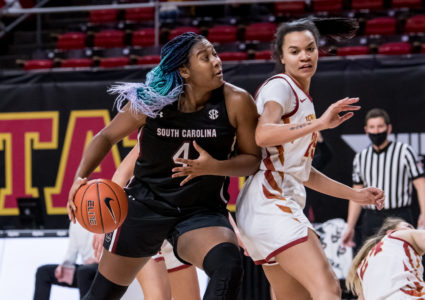 WBB: Cyclones swept away by No. 1 Gamecocks