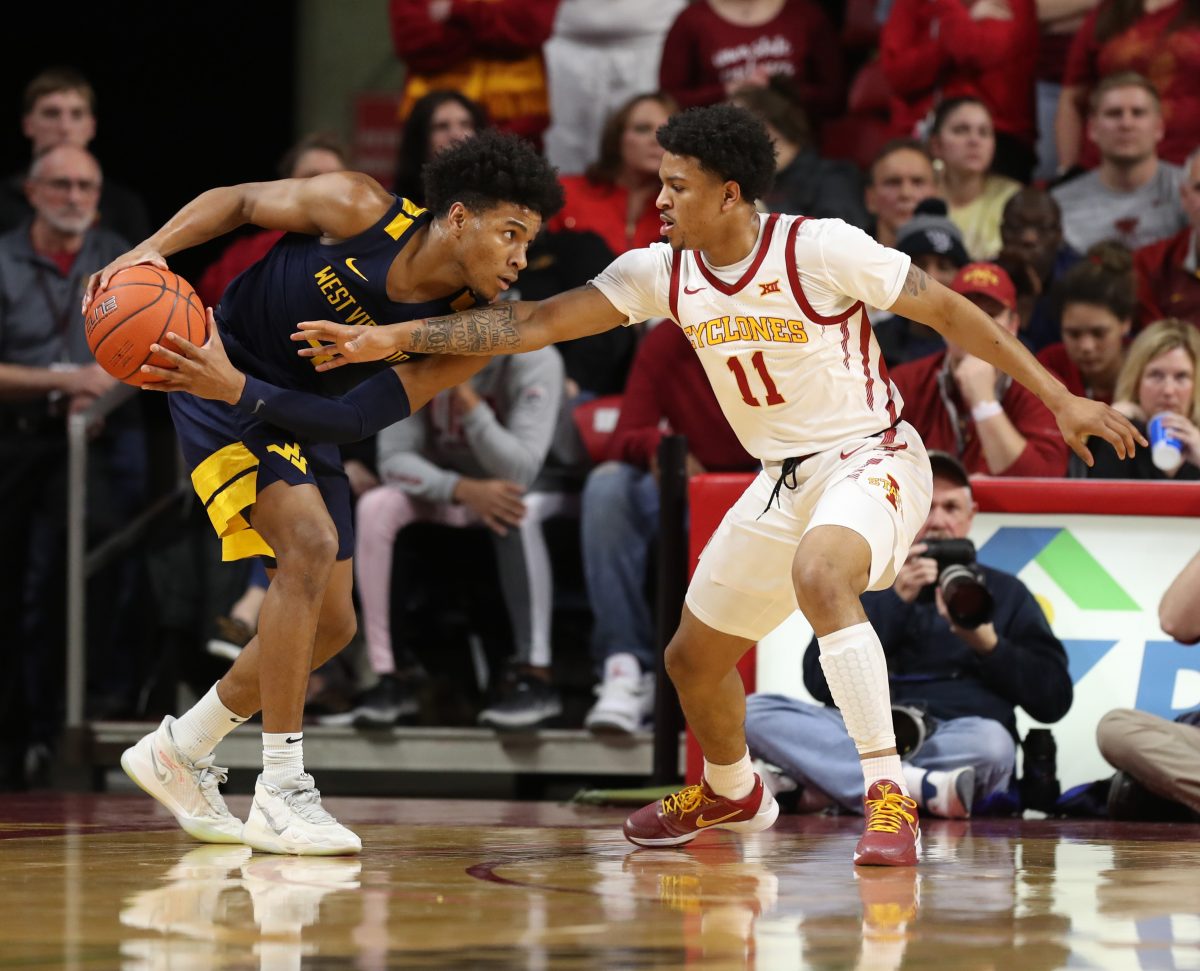 AMES — It was just another test.

One more challenge in a year that has been full of them. There have been a couple of A’s, several B’s, a handful of C’s, probably a few more D’s and then some very memorable F’s.

But, this test for the seniors on Iowa State’s men’s basketball team was different than any other they had faced during the Cyclones’ struggle of a 2019-20 season. Sure, facing West Virginia’s pressure defense and trying to keep the Mountaineers off the glass had been tough during a 77-71 loss on Tuesday night at Hilton Coliseum, but at least they had their teammates to fall back on in those moments.

No, this moment, the one where they would take the microphone from their head coach and address the several thousand fans left of the 13,870 strong crowd that had packed into the program’s vaunted home arena despite the team’s 12-18 (5-12 Big 12) record, was a completely different test than any they had faced so far during their careers.

“To go stand out there after a loss, as a player and as a coach, it ain’t easy,” Iowa State head coach Steve Prohm said. “I think it tests your character. It’s like I told the guys in the locker room, ‘You’re going to fight with your wife. Your boss is going to be hard on you. Jobs are going to be tough. Everything is not going to be perfect.’ Eleven months ago, we won a championship. Now, you’re speaking at senior night after a tough loss.”

This season for Iowa State basketball at Hilton Coliseum was certainly far from perfect. Don’t get me wrong, there were high moments, like the win over eventual Big East champion Seton Hall and the dominant victories over Texas and Oklahoma, but the low moments, blowout losses to Kansas and Texas Tech and… gulp… Florida A&M, are the things that will stick in most people’s minds.

There were a lot of moments, including some on Tuesday, when Marial Shayok, Lindell Wigginton, Talen Horton-Tucker and everyone else on last year’s roster holding a Big 12 Tournament trophy in Kansas City could not have felt further away.

That moment felt far away when Prohm was forced into calling a timeout just 44 seconds into the game against the Mountaineers after back-to-back bad defensive possessions sandwiched around a bad offensive possession. The image of Shayok holding the Big 12 Tournament Most Outstanding Player trophy felt like nothing but a distant memory as two Cyclones ran into each other while trying to corral a rebound as the ball, ultimately, ended up in the hands of a Mountaineer for a wide-open layup, extending their lead to 13 points, as time expired on the first half.

The Cyclones competed their way back into the game in the second half, even building a four-point lead on two different occasions, but it was West Virginia that made enough plays down the stretch, knocked down free throws and grabbed timely rebounds when they were needed. It was a test for the Cyclones that probably would receive a passing grade on most scales but still was not enough to end the home schedule with a victory because that requires A and B-game performances in a league like the Big 12.

As the crowd filed out, the days when Iowa State rarely received anything but a passing grade — and opposing teams rarely left with wins — in this building felt incredibly far away. Even further away than those three days in Kansas City last March when the Cyclones won their fourth Big 12 Tournament title in six years.

Even then, those memories probably felt like just yesterday to Mike Jacobson and Prentiss Nixon as they stepped to center court prepared for their final exam in Hilton Coliseum.

“I’m not going to lie to you, today sucked,” Nixon, who scored 19 points, including going 5-of-7 from 3-point range on his senior night, said. “I woke up this morning and the feeling in your stomach of knowing this is your last home game in college… You’ve got to sit with it all game long until the game comes. You kind of just try to put it behind you and play. It was a rough day. It was a tough day.”

You see, the reality of this day is that two young men were tasked with facing, well, reality. While it feels like college will last forever when you arrive on campus bright-eyed and busy-tailed at 18-years old, untested, but ready to conquer the world, the fact of the matter is it does not.

For most kids who have fallen in love with that stupid orange ball and the sound of it swishing through the net, the idea of living in a world without playing basketball is completely unfathomable. But, the reality is we all have only a finite number of tests before our clock runs out and our days of competitive basketball are over.

If you passed enough of those tests while you are young, you might get the chance to make money playing the game you love. Both of Iowa State’s seniors this season surely will have plenty of opportunities to do just that.

Even then, none of it will ever be the same as it was during those innocent days of facing test after test with guys you are proud to call your brothers by your side for nothing but an education in the classroom, an education in the school of hard knocks on the basketball court and the love of the game.

At the end of it all, most everyone ends up in the same spot — center court with a microphone in their hands prepared to take their final test in front of their home fans. There is still a game left on Saturday in Manhattan and at least one next week in Kansas City, but now the reality starts to hit that the end of the road in this chapter of your life is near.

A different kind of tests await.