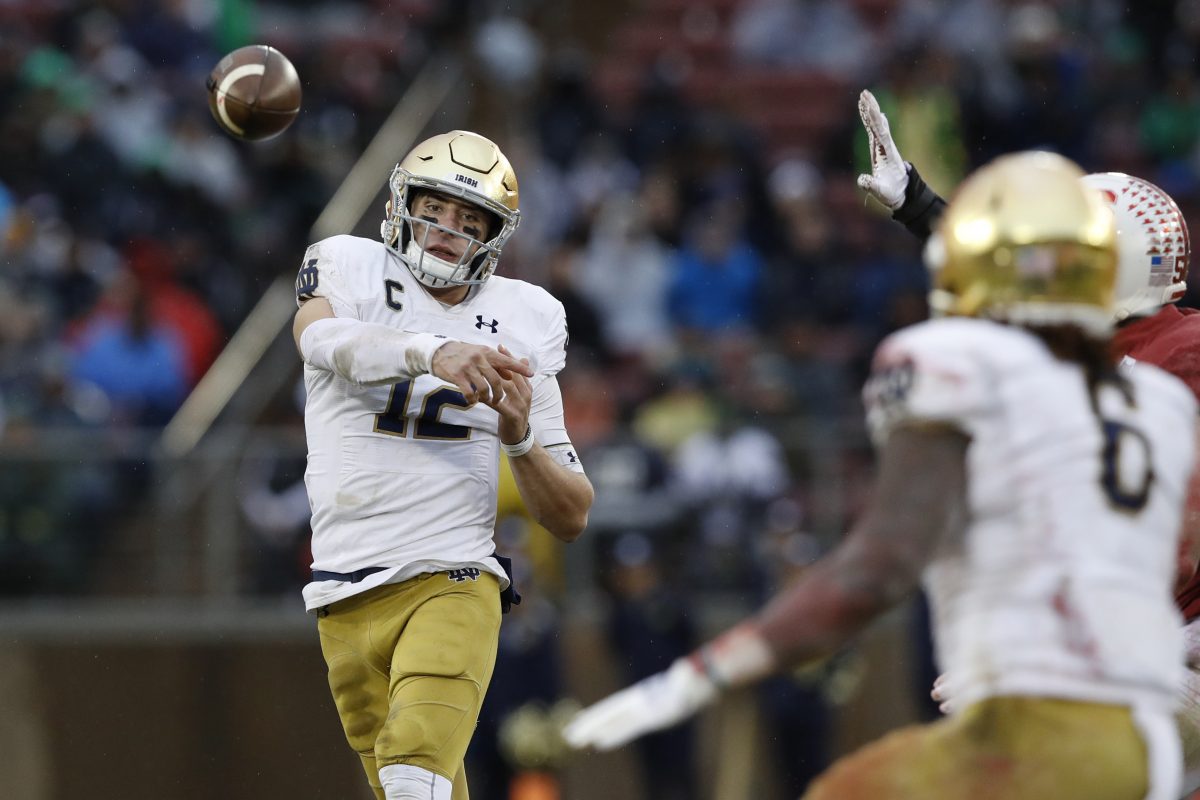 Fanatics, I have good news and bad.

I think we can all agree that the Camping World Bowl for Iowa State is a major victory, if for no reason other than the national name brand opponent, Notre Dame. The bad news is that due to circumstance, Williams had to go to the last reliever in the bullpen to give you the instant scout on Notre Dame.

This is normally done by the incomparable Brent Blum but he has a new addition to his family that could use our prayers and well-wishes.

This will be the first ever meeting between the Iowa State Cyclones and Notre Dame Fighting Irish.

Notre Dame finished 15th in the 2019 college football playoff rankings after finishing 10-2. Their two losses on the season came at Georgia 23-17 and a drubbing at Michigan 45-14. Their highlight victories came against Virginia in 35-20 and a stomping of Navy, 52-20.

His favorite target this year has been Chase Claypool a 6-foot-4 wide receiver that has 59 catches for 891 yards and 12 touchdowns this season. Behind him, the ball has been spread to Cole Kmet with 41 catches, 482 yards, and six touchdowns and Chris Finke with 35 catches, 415 yards, and four touchdowns.

On the ground, Tony Jones Jr. has been the feature back with 133 carries for 722 yards, and 5.4 yards per carry average to pair with his five touchdowns this season. The second most prolific runner has been the quarterback, Book, who has rushed 103 times for 537 yards and four touchdowns.

Their raw scoring this year has been just under three points per possession (Iowa State is at 2.7) which, is in the top 20 in the country and can largely be attributed to turning the ball over on just seven percent of possessions (8th) and taking advantage of their opportunities when they get inside the 35 yard line by scoring an average of 4.3 points per trip (34th).

Their offense moves the ball successfully by gaining just over 50 percent of all available yards (based on field position), which is 36th in the country. However, they have not been dominant in successfully moving the ball to stay ahead of schedule or with explosive plays and that is true for running or passing plays.

Overall, they are very solid both on the ground and through the air and have excelled in situational football and excellent timing on their attack while making very few mistakes.

The Irish defense has held opponents on average to 1.4 points per possession, which is the 13th best raw scoring defense in the country. They have been stifling in preventing their opponents from moving the ball successfully by allowing just 33 percent of yards to be gained (8th). They have been most stingy against the pass with only 35 percent of passing attempts going for seven yards or more (12th). They have kept teams from getting ahead on the chains and are allowing an explosive play of 15 or more yards on just 49 percent of attempts (15th)

Lastly, they have won big in the turnover department by forcing turnovers on 16.5 percent of possesions (5th in FBS). Their defense has 26 turnovers gained in total and are +15 overall in turnover margin. They have recovered in FBS best 17 fumbles but that isn’t due to “fumble luck” they have also forced the most fumbles in the country at 31, recovering right around 50 percent of fumbles.

Khalid Kareem and Jeremiah Owusu-Koramoah are disrupters on the defensive line that have combined for 19.5 tackles for loss and eight sacks. Asmar Bilal and Drew White are the leading tacklers and linebackers that can disrupt as well with nine and eight tackles for loss respectively.

On the back end, Kyle Hamilton is the headliner with four of the team’s nine interceptions this season.

It is a winnable game against one of the largest brand names in college football. Notre Dame is a good team that will propose problems on both the offensive and defensive sides of the ball. The defense will have to make some plays and not just allow the Irish to methodically drive down the field. The same is basically true for the offense. Staying ahead of the chains will be critical as usual but they’ll absolutely need to hit on some big plays to get points on the board.