AMES — It seems impossible to escape that tingle down the spine.

Or the sinking feeling in your gut.

Why can’t *easy* wins on paper more frequently turn into zen-like victories for Iowa State? Where the breaths are slow, full and peaceful — not short, sputtering, like wheeze-inducing hyperventilation?

Because that is not how life as a Cyclone fan is supposed to be. Not yet, anyway.

That remains true after Saturday’s tenser-than-expected 41-31 win over Kansas that cemented the No. 22 Cyclones third straight winning season for the first time since 1976-78.

“We didn’t play great today,” ISU head coach Matt Campbell said after his team improved to 2-1 in November. “I’m not going to sugarcoat that in any way, shape or form. Some guys did some great things and there were great moments, but that’s not what we’re looking for. We want to be better than that. That starts with myself. How do I continue to do a better job of coaching these young men to give them an opportunity to be the best they can be for four quarters? Unfortunately, we haven’t done that yet. Hopefully that’s another lesson we can learn from and grow from.”

It was hard. It was frustrating. But when ISU needed to bow up the most, it did — and it started, as usual, with quarterback Brock Purdy.

The sophomore standout completed his final 12 passes after throwing an interception that led to a Jayhawks touchdown — and a 31-27 deficit with 10:42 left.

The Cyclones had been plagued by drops, by receivers and defenders, all day. They’d been flagged for ill-timed penalties and poorly thrown balls that could have turned into big plays.

Again, the “little things” and “details” were stumbling blocks, not strengths.

“Everyone stepped up their game and executed and dialed down to the details of the offensive line blocking, receivers getting open and then being on time to throw the ball,” said Purdy, who became the Cyclones single-season record holder in completions (280), passing yards (3.575) and total offense (3,843). “That’s what happened. Yeah, we executed.”

Yeah, they did, and they sealed the win with an exclamation mark.

Facing fourth and goal at the four-yard line — and clinging to a 34-31 lead against the plucky Jayhawks (3-8, 1-7) — ISU initially appeared to ready to send out Connor Assalley and the field goal unit.

Assalley was the hero in last week’s 23-21 walk-off win over Texas, but stayed on the sidelines.

Instead, the Cyclones went for it — and Purdy patiently bided his time until finding Sean Shaw for a four-yard touchdown to essentially ensure victory.

That’s significant in more ways than one. ISU had delivered several self-inflicted wounds for most of the game, but drew out the dagger to punctuate the win. That’s a winning mindset, not a try-not-to-lose approach.

“I feel like this whole season, every single game can be coming down to the wire in the fourth quarter — and honestly, for (Kansas), they played great against Texas, so we knew it wasn’t going to be easy,” said Purdy, who finished 29 of 42 for 372 yards and four touchdowns. “I don’t really feel that pressure, to be honest. I just go out there and trust in my guys. They have my back and I know the whole stadium has our back, too. It’s awesome the way it ended, really.”

The last two home season finales at Jack Trice Stadium have been brutal.

It’s hard to forget how FCS non-scholarship Drake — on an ice rink of a field — lost by three to the Cyclones last season.Then Saturday’s “easy” win turned into another teeth-gritting, pulse-quickening exercise in mental and emotional endurance.

That’s life as an ISU fan. When you think you’ve “arrived” a harsh reality comes like a swift kick to the … rear. But now, winning often accompanies the wincing — and that’s a pleasant set of new rules.

“It just makes us more hungry. We know what we’ve got to do. We’ve got to come back and correct the mistakes that we made,” said senior receiver La’Michael Pettway, who caught two touchdown passes and made four first-down grabs in third down situations. “Just come back stronger the next week.”

It’s a struggle and that’s the point. Breathing easy isn’t supposed to happen and easy wins often become anything but.

It’s why despite Saturday’s recurrent struggles, Campbell said his team has played its best football in the month of November since he’s been here.

Just don’t expect any of it to come without at least a few bouts of heartburn.

“I’d still say we’re playing the best football in the history of my time here and maybe in the history of my career in November,” Campbell said. “We’ve played really good football. We’ve improved greatly and we’re going to need all of that and more against our next opponent (Kansas State). Because our next opponent, their history has said they do all those things, too, so they can be their best. So it will be a great challenge for us, but, yeah, I think we just keep growing and we keep learning. Still have a lot of work to do and obviously not satisfied.” 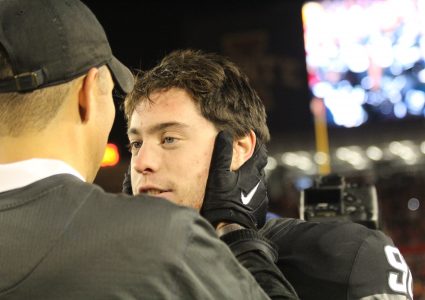