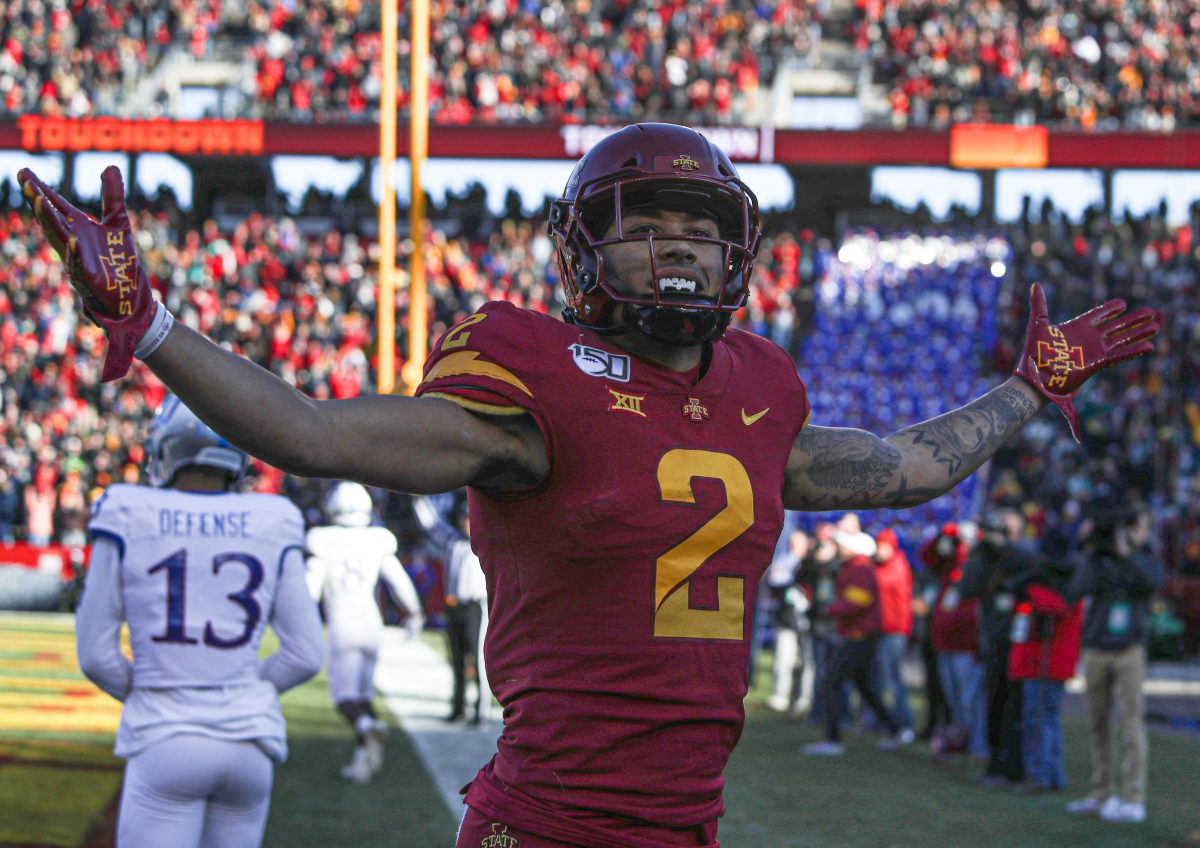 As Neil Diamond’s “Sweet Caroline” rained down over the Cyclone faithful filing out of Jack Trice Stadium for the final time in 2019 on Saturday following Iowa State’s 41-31 win over Kansas, only a handful of people sang along or waved their hands from side to side.

No, the song absolutely is not losing its luster with the folks clad in Cardinal and Gold. This was just another small microcosm in the transformation of Iowa State football over the last three seasons.

It was less than half a decade ago that the Cyclones pulling out a 10-point win over the Jayhawks would have been heartily celebrated. This win, sealed with a four-yard touchdown pass from Brock Purdy to Sean Shaw late in the fourth quarter, was met with shaking heads and sighs of relief.

A less than convincing win over one of the Power 5’s perennial bottom-dwellers is no longer cause for celebration. Iowa State football has left the days of standing alongside those programs in the cellar behind.

“Senior Day is emotional. I know that. I put that on myself. It was an emotional game last week. It’s getting to the end of the season. I think all of those things can be excuses, but I don’t want to be that team,” Matt Campbell said when asked why the Cyclones largely did not play very well for the first three quarters on Saturday. “I want to be the team that’s getting better every week and I want to be the team that’s got the ability to be its best when its best is needed. There were parts of today that we did do that, which was huge, and that’s why we ended up winning the football game.”

At the end of the day, Campbell’s point is the one that matters most in the short term. The Cyclones won, clinching their third consecutive winning season for only the second time in program history.

This was a game Iowa State should have been able to win handily, though. There is a reason the Cyclones were 20-plus point favorites coming into the game according to our friends in the desert and it is only partially due to the talent level on the opposing sideline.

Iowa State is a better team than what they showed to be against the Jayhawks. It is better than the 493 yards of total offense is allowed to a Kansas offense that has been hot and cold all season. It is most certainly better than the 154 rushing yards it gave up to star tailback Pooka Williams.

The Cyclones finally started to prove that in the fourth quarter, scoring 20 points, while Purdy completed his final 12 passes. It still took the team three full quarters until it fully snapped into gear and played the way it is capable.

This is far from a new problem. It was a problem in the season opener against Northern Iowa and again two weeks later while hosting Iowa. We all remember falling behind 20-0 in Waco and the huge deficit in Norman.

Iowa State still can’t figure out how to put four quarters of football together.

“We’ve yet to do that,” Campbell said. “It’s out there for us. This team’s got the ability to do that. That’s something that’s really important for me.”

In all of those games mentioned above, the Cyclones, who clinched their third straight above .500 record in Big 12 play on Saturday and just the fourth in the Big 12 era, showed flashes of the potential they have.

This team had the ability to be heading to Dallas on the first Saturday in December to play for the Big 12 title, but they have not been able to string four quarters of complete football together.

If that team who played the fourth quarter in Waco showed up for the first three, the Cyclones win that game, which ended as a two-point loss, with ease. If that team who pushed Oklahoma to the brink in the fourth quarter and came one two-point conversion away from another upset win had shown up in the first three quarters, well, good luck Sooners.

The team Iowa State showed to be in the fourth quarter on Saturday, especially offensively, would have had Re-al Mitchell leading the way to close the game if they had been there in the first three quarters. Instead, they started slowly with two three and outs. They failed to convert on a short fourth down and could not get off the field defensively.

“Offensively, we’ve got to start better. We had two three and outs. We’ve got to convert that fourth down. Just little things here and there we can pick up. We’ll keep plugging away,” Charlie Kolar, who is putting together one of (if not THE) best seasons ever by an Iowa State tight end, said after the game. “At the end of the day, though, a win is a win. Everyone wants to say stuff about the Big 12 because we don’t have someone in the playoff or something, but from top to bottom, every single team in this conference, you see it all year, there’s so many good games every week. It makes you really have to come to prepare every single week because every single team you play is a good team.”

Give some credit to Kansas. The Jayhawks are improving quickly under Les Miles. They are no longer going to be an automatic W on the schedule based on their current trajectory.

Still, the last three years have been about raising the standard of Iowa State football, and the next step in the program is to reach that standard every play of every game every week. It is about striving for greatness each and every day in practice, meetings and classes.

“Unfortunately, here, it’s our only chance. If we want to win every game and we want to have the ability to be the best version of us, it’s our only chance,” Campbell said. “We can’t take a quarter off because we’ve seen what happens if there’s even just a quarter off. Unfortunately, we’ve put ourselves in really tough situations. It doesn’t matter how good their talent level is or how not good their talent level is, the reality of it is we have to be our best because it’s who we are.”

There is no doubt the talent inside the Bergstrom Football Complex is miles ahead of where it was on Nov. 23, 2015. This program has come so unbelievably far in just four, seemingly, short years. It feels like yesterday being in the postseason was a hope, a dream, and not an expectation.

But, the reality is this is still Iowa State, and this program will never be Oklahoma. No matter how much the talent level rises or how many buildings are built, it still is and always will be Iowa State, a place where you are going to be fighting uphill if you do not play your best.

The moment Iowa State football reaches that point of only accepting excellence at every turn, it could be special with the amount of talent inside that building. It is the kind of thing that created some pretty special seasons for the program the Cyclones will face next week, Kansas State, and their old head coach who still feels like a thorn in our sides even in retirement.

Kansas State has been the epitome of living to the standard each day, each week, each play and each game for nearly 30 years to the tune of decades of excellence outside of a handful of years that comprised the Ron Prince era. They remain that same program even now under new head coach Chris Klieman.

Once Iowa State officially reaches that point, it could spell something special. It could lead to things we have never seen, nor believed could be, done in Ames, Iowa.

“Honestly, I think experience to understand where we need to get better at. Then just having that drive and hunger individually, everybody on the team, to demand greatness like (Campbell) says,” Purdy said. “I feel like when everyone actually does that, then we’ll be able to from the first quarter, second quarter, third quarter, fourth quarter and on, we’ll be able to play our best for four quarters in a game. We have a lot to look forward to. We’re going to build from this game and hopefully, we can do that for next Saturday.”