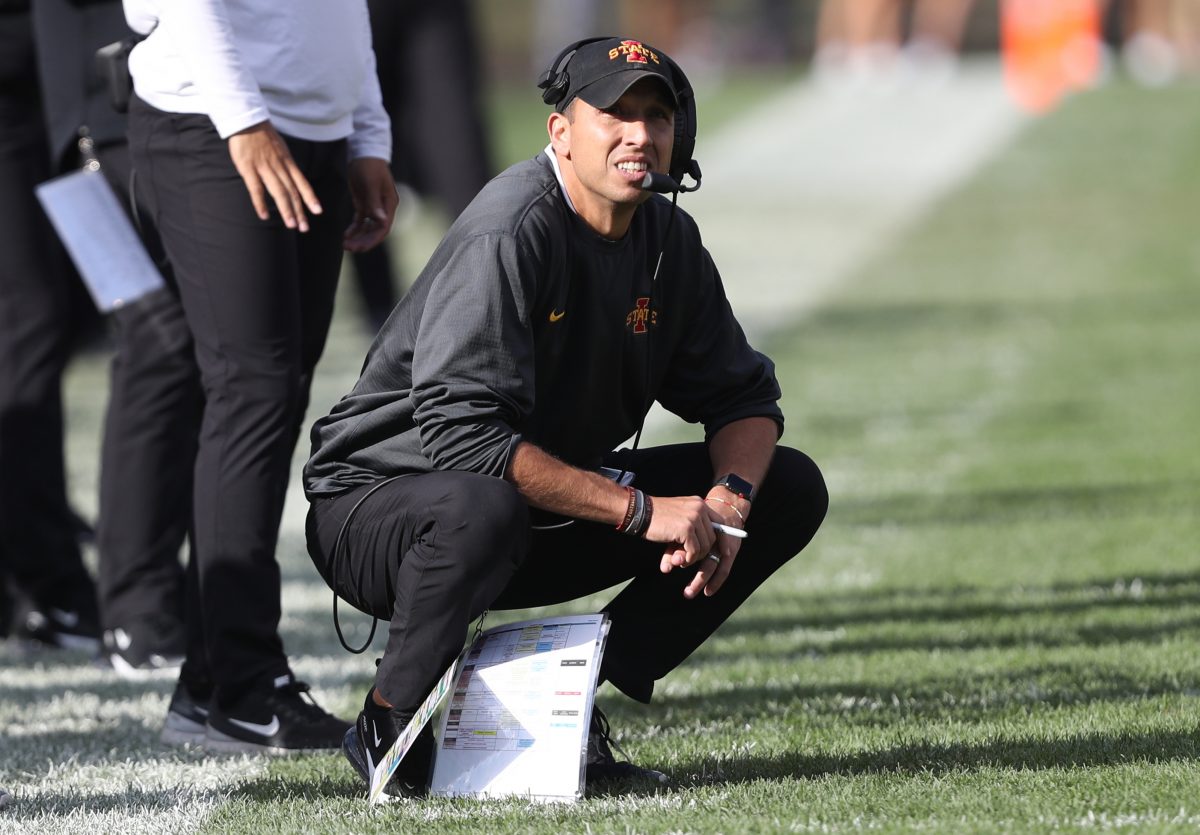 Campbell: Brock’s a really special kid. I think probably way even greater than just as a football player. I think, to me, probably what makes him the most special is who he is as a person and I think you get some of those players sometimes that come around and just have those unique mannerisms about who he is as a person and who is as a man that I think really impacts everything around him. I think the greatest joy probably has been that. Obviously, as a football player, he’s a young man that keeps working harder to get better each and every week. That part is really enjoyable as a coach, too.

Q: With a talent like that, do you kind of structure for him less than you would a normal quarterback?

Campbell: Yeah, you know, I think that’s probably where Brock’s grown the most. If you said, ‘Where’s Brock grown from last year to this year,’ and I don’t even know if it is structure as much as it is kind of owning what is going on around them offensively. I think it was good for us to be able to get to the offseason last year and really put an offense around his skillset. Really help him take ownership in what we’re trying to do offensively.

Q: West Virginia’s quarterback Austin Kendall has kind of had a Jekyll and Hyde season, throwing for touchdowns and throwing interceptions. What do you see from them?

Campbell: I think the thing that jumps off the screen is just his talent. I think anytime you get into a new system and you’re working through that, you’re going to have both positives and negatives, but I think the biggest thing that jumps off is the amount of positives that he’s having. A lot of credit to their coaching staff and, certainly, a lot of credit to him, because you can see a young man who has the ability to make all the throws, a young man that’s athletic enough to use his legs to make things happen and I really think a young man that you see a lot of confidence in right now in the system. I think that’s certainly impressive for only being in that system for a short time.

Q: Obviously, the running game was going to be different in the post-David Montgomery era for you guys, but what have you had to do to get production out of your run game? You guys have done farily well I think all things considered.

Campbell: Yeah, you know, I think the biggest thing for us is balance and having an understanding of where those run yards can come for us. I think one nice thing for us is it’s a little bit different from last year even though Brock was a guy that could pull the ball down and, maybe, run off of a scramble, is he’s also a guy who has the ability to be an equalizer at times in the running game. Why we’ve steadied the ship up is some of these new young running backs. Johnnie Lang’s taken a really good step forward. Kene Nwangwu, when healthy, has done a great job for us. Some of these young guys are stepping in and getting opportunities as we continue to build and grow. I think the nice thing for us is having a veteran o-line has allowed us to be, maybe, a little more multiple than we have been in the past.

Q: Defensively, you guys have stacked up pretty well in most categories, but third-down conversion rate has been a challenge. What are you seeing there that has been tough?

Campbell: You know, I just think for us it’s, again, you lose some really good players from a year ago on the defensive side of the football, especially situationally, and now just trying to figure out who those guys are and then what those guys can do through the early part of the season. I think it’s something you’ve even seen over the last couple of games, we continue to keep getting better at. I think a lot of times it’s just making sure you’ve got the right guys in the right places and allowing them to do what they do best.

Q: Just kind of piggy-backing from a couple of questions ago, with offensive identity, what’s the balance of forcing things you want to do schematically versus knowing what your guys do. What goes into that?

Campbell: Again, I think so much for us is it always goes back to players, formations, plays. Who are those players? I think that’s one of the unique things I’ve been so impressed with some of the efficiency that we’ve had offensively not knowing yet who some of those players are but yet now as this season starts to unfold a little bit some of those guys, other than Brock, that are starting to come to the forefront, which is something that is always a challenge when you lose some veteran guys on the offensive side of the football. I think that’s one of probably our favorite parts. Building an offensive identity through the players and the personnel within the offense. I’ve always been a big believer in that, because, at the end of the days, it’s those players that give you a chance to win football games.

Campbell: Yeah, well, you know, I think we’ve probably created an identity much faster this year than we ever have. I think a lot of this has gone through the quarterback, who we know is a really good football player. I think different than last year where it was more around David (Montgomery) and Hakeem (Butler), this year is totally through Brock’s skillset both running, passing and certainly in our run game.

Campbell: He practiced really all week last week and, probably, was available last week to play. He dressed and went through warmups. I think we just felt like we were still maybe a week away. I would say he’s closest to probable that he has been for this week. I really do expect him to play this week. Again, once we get out on the practice field here in the early part of the week, we’ll see where he is, but he practiced all week and just wasn’t 100 percent all there going into that football game last week.

Q: If he does come back, what do you do? Do you stick him back at center or do you play with it a little bit? Or does it depend on the flow of the game and what’s going on out there on the field?

Campbell: Yeah, I think all of those things are included. This group has really started to do some good things. I think a lot of credit is that Collin is a guy that can be an anchor for us. I think just trying to find out what the right rhythm is for this team and make sure that we don’t mess up the rhythm of the offensive line. I think getting Collin back only strengthens us and I don’t think it can weaken us in any way.

Q: Coach (Gary) Patterson said after the game that they had to adjust to some of the things you guys did with the tight ends in the running game that they hadn’t seen on film this season. How much does that group continue to evolve even as you get near the midpoint of the season?

Campbell: I think you have to always evolve. There’s too many really good coaches in this conference to just say, ‘We’re going to do what we do.’ The reality of it is if you’re not evolving, you’re going to get humbled really fast. I think that’s the fine line and challenge of creating a foundation and yet evolving within that foundation. We’ll work really hard every week to continue to have evolution and continue to try to grow our offense and really do the same thing on defense.