Over the last two weeks – on the road – Iowa State has outscored West Virginia and Texas Tech by a combined 72-38.

In those two contests, true freshman running back Breece Hall rushed for 315 yards and FIVE touchdowns. Those numbers don’t account for his impressive pass blocking skills and 78 receiving yards.

It has been incredible to watch and impossible to not spot the very obvious “it” factor that lies within Hall’s game.

But don’t forget about the multiple conversations we all had during the offseason about what it would take for this offense to click the way it is in 2019.

This group has gone from being a weakness in the program to one of the best units in the Big 12. Hall, Brock Purdy and all of the other skill guys scoring touchdowns are benefiting from it.

It’s a team deal. Everybody deserves credit. But this group of offensive linemen has taken a lot of blame over the years. It is time that we all give them major props too.

This is basically the same group of guys as the last few years, but they have worked hard and gotten to a point where multiplicity is not only what Matt Campbell is striving for offensively, but has become Iowa State’s identity.

Yards Per Play: The Cyclones averaged a hair over 10 yards per play in Saturday’s 34-24 victory over Texas Tech, which is a gaudy number. That pushed Iowa State’s season yards per play average to 7.4, which ranks the Cyclones fourth nationally behind Oklahoma, Alabama and LSU (not bad). For reference, Iowa State averaged 5.8 yards per play during the 2018 season.

I think this mainly proves the point I made to open this column … Iowa State lost its underclassmen running back and wide receiver to the NFL and basically returned everybody else … what’s the difference?

One more on the O-Line: All of this has occurred without starting center Collin Newell.

Oklahoma State: Saturday’s date with the Cowboys should provide another opportunity for this offense to really put its foot on the gas. The Cowboys are giving up an average of 6.1 yards per play and really struggled defensively in Saturday’s 45-27 loss to Baylor. The Bears averaged 6.1 yards per rush on the ground and Charlie Brewer averaged 18.4 yards per completion through the air.

Iowa State opened as a 7 point favorite in this one. As of Monday afternoon, that line had already been bet to -10.5 in favor of the Cyclones.

The Iowa State men’s basketball team scrimmaged Minnesota over the weekend and came away with a loss in overtime. I heard that the Gophers hit a buzzer beater to send the game to OT.

Iowa State missed a ton of shots in the loss. Without being there, it is hard to say if they were good shots, bad shots, or whatever in between.

Iowa State will still scrimmage Wisconsin before the season tips off on Nov. 5. against Mississippi Valley State.

I get the feeling that Iowa State is going to be a fine defensive team in 2019-20 but there are still a handful of questions to be answered on the other end.

Hopefully he proves me wrong, but I have questions about Mike Jacobson carrying this team at the four.

In Steve Prohm’s defense, Iowa State has a handful of bigs that are legitimate Big 12 players. How many of them do you want sitting at a given time?

I guess I am coming to terms with the fact that stylistically, this will be a much different team than we are used to watching. I am totally ok with that though as I feel like this group will be one that plays with a ton of heart and Iowa State fans are going to love.

Media days on Tuesday and Wednesday

Just a heads up that Jared Stansbury will be in Kansas City Tuesday and Wednesday covering the Big 12 basketball media days (men and women).

It seems early and with football rolling, that’s where the attention of many is at and rightfully so. But hopefully Jared’s coverage down there will get you thinking about the roundball just a little bit before the calendar switches to November.

Just wanted to give you all aheads up that we recently launched our new app.

Search Cyclone Fanatic, The App, for either Apple or Android users and it should show up.

We realize it isn’t perfect right now but when it comes to improving our mobile presence and making life easier on all of you, this is a great start.

You guys can now start downloading our @cyclonefanatic app on Apple & Android. It isn’t perfect but a great start and something we will continue to build on. A much easier way to access our content via mobile. Thank our Patreon members for funding this. https://t.co/3VvN4MvzLu

It is also a good time to note that we are a locally owned, independent media company, which is incredibly rare in 2019. This app was paid for by our Patreon members who donate to the site monthly because they appreciate what we are doing.

If you would like to contribute to things like this, please consider becoming a Patron as well! Starting in 2020, we will be offering new benefits for Patrons as well so stay tuned for that.

Have a great week! 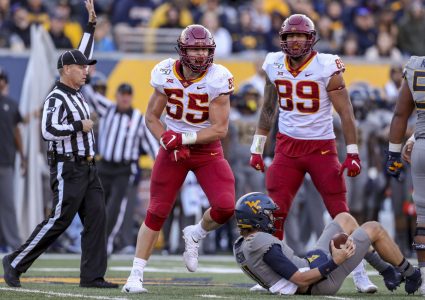