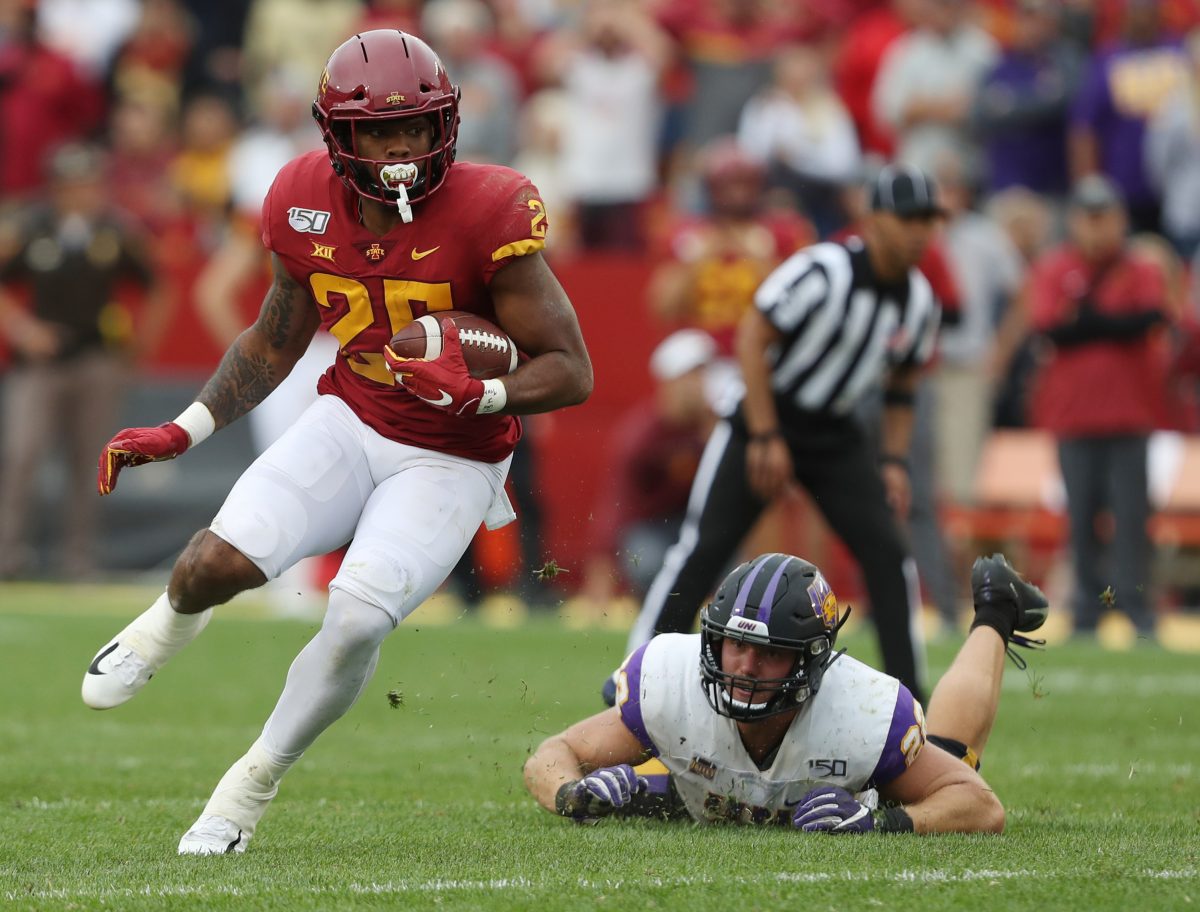 AMES —  Question: Who’s in line to be ISU’s featured running back?

Answer: It depends on the situation — and maybe the week.

Breece Hall seemed to be the number two, powering for 47 yards on 11 carries, but Sheldon Croney manned the position in the fourth quarter and overtime, racking up 59 yards on 13 carries — and most notably, the No. 21 Cyclones’ game-winning touchdown in a mistake-laden 29-26 triple-overtime win over Northern Iowa.

“Sheldon is like the rock in there,” ISU coach Matt Campbell said of the senior. “That’s the hot topic, who’s the tailback? That’s why you need these moments and these games and these situations, so you can figure that out. All the guys had spurts of positive things that happened. Johnnie had a couple of good runs, Breece had a couple of good runs, Kene (Nwangwu) got dinged up, we’ll see what that situation looks like. Then Sheldon stepped in and steadied the ship at the end of the game. All the guys can do a lot of different things. Did I think somebody separated themselves? I wouldn’t say that today, either. It’ll be a while until those guys figure it out and until somebody gets into a groove.”

So “the rock” emerged late in the game and produced.

“It’s very nice for me, knowing that they trust me in those situations and that my hard work’s paying off,” Croney said.

It has for four years.

Croney made some critical plays when David Montgomery was dinged up last season.

Where he fits in a crowded backfield going forward remains uncertain, but his performance down the stretch Saturday — despite a fumble — certainly helps his cause.

“Just trust the process,” Croney said of his Campbell-led approach. “Trust those things you did in practice every day. Then when you get in the game, it’s not really anything different. Just taking what I learn in practice and trying to do that again in the game.”

La’Michael Pettway hadn’t put on pads for several months before he joined ISU as a graduate transfer from Arkansas late this summer.

Turns out that even a bit rusty, the tall target can shine.

Pettway made three catches Saturday. Two went for touchdowns. To put that in perspective, the 6-2, 223-pounder scored a total of four touchdowns in his breakout season as a Razorback in 2018.

“He came out there today and showed he can be very reliable,” said quarterback Brock Purdy, who connected with Pettway for scores from seven and nine yards out. “In practice, I trust all my receivers. It’s just those plays call were designed for his receiver spot. I’m proud of him.”

Pettway said he was just happy to be playing in a football game again.

“I feel like I’m getting back to myself slowly,” he  said. “Like I said, being out of football eight months, not putting on pads, man, it’s rough. Just getting back in the groove, knocking my rust off, is great.”

Mike Rose was a freshman All-American at MIKE linebacker for the Cyclones last season. So how did he start out the 2019 campaign? By moving to the SAM spot, of course.

Rose’s shift outside allowed O’Rien Vance to start inside and lead ISU in tackling. He also posted two sacks while spying mobile Panthers quarterback Will McElvain.

“He’s changed his life,” Campbell said of Vance. “He’s changed who he is — how he sleeps, how he eats, how he approaches things. And what we’ve gotten is the best O’Rien Vance that Iowa State’s seen. He’s earned that right to be in our starting 11.”

Rose and mainstay at WILL, Marcel Spears, Jr., combined to record the Cyclones’ other sack.

“Gosh, every time I looked on the field, 23 (Rose) was either making a play in the backfield or was setting the edge on the perimeter,” Campbell said. “That kid’s really special and think about what he did today, from being the MIKE linebacker to being the SAM linebacker and playing at the level that he played at today was powerful.

“I know what I get from Marcel Spears. He’s the same guy pretty much every game and I thought his character and leadership down the stretch was really big, too. He was the guy in both huddles that was kind of leading the charge.”

Deshaunte Jones’s 14 receptions tied for second all-time on ISU’s single-season chart. He’s now 11th all-time in catches with 122. “I know Brock, he trusts me to catch the ball,” Jones said. “So it’s just getting positive yards as fast as I can. A lot of times I caught the ball three, four yards and then I got seven or eight. Just happy for our offense to keep moving forward.”… The Cyclones won their seventh straight home game, tying a record in the modern era… ISU has never lost a game (4-0) that advanced to triple overtime… Purdy posted single-game career highs in passes attempted (41) and completions (30)… Tight end Charlie Kolar notched career bests in receptions (four) and yards (45).

“You win, lose, draw — no matter what the score, in my opinion, this second week (is) huge for us,” Campbell said. “To me, like I said a little bit on our last press conference, I really love the ability to have a bye week because to me it allows us to really sit, use this as an evaluation tool, almost an extension of camp and really do a great job now going into the bye week of saying, ‘Who are we? How do we continue to develop the plan around both sides of the football and special teams and then see where we’re at?’ So it’s huge for this team. We’ve got enough youth and enough veterans that there’s a lot of work to be done and we’re going to have to do a great job worrying about Iowa State here over the next seven days.”