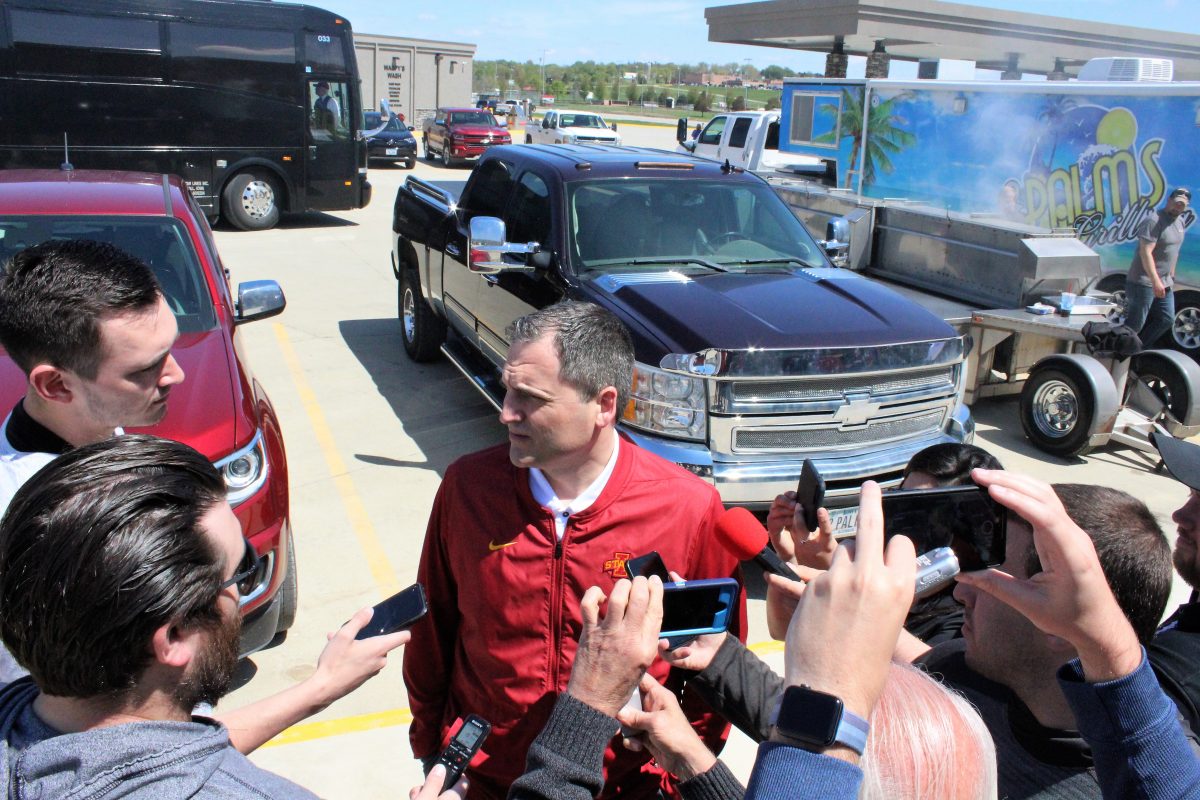 Steve Prohm speaks to the media at Iowa State’s first stop on the Cyclone Tailgate Tour. Photo by Connor Ferguson.

AUDUBON, Iowa — With one spot remaining on his 2019-20 roster, Steve Prohm has no doubt about the kind of player he is looking for to fill it.

The Cyclones made two additions to the program in the last week with the signings of three-star Kansas guard Caleb Grill and sit-one, play-two transfer Javan Johnson. Now, the staff has its sights set squarely on landing a perimeter player capable of making an immediate impact next season.

“We need a guard that can score. We lose four guys that are double-figure scorers. We need more scoring punch on the perimeter,” Prohm said on Monday during the first stop of the 2019 Tailgate Tour at The Feed Mill restaurant in Audubon. “I think it has to be (someone immediately eligible) unless we can’t get one that would impact our team. Then, you just want to get talented players into your program and it would become a sit-out guy, but the first priority is a guy that can help us next year.”

Landing Grill was the Cyclones’ first major recruiting win of the spring cycle as they beat out other finalists UNLV and Kansas State for the former South Dakota State signee. Grill, a four-sport athlete at Maize High School, immediately adds athleticism and versatility to an Iowa State backcourt that was ravaged by the graduations of Marial Shayok and Nick Weiler-Babb plus the NBA dreams of underclassmen Talen Horton-Tucker and Lindell Wigginton.

For Prohm, the hope is that Grill, who climbed more than 300 spots in the final 247 Composite rankings, will be able to come in and make an impact during his first season in Ames.

“Excited to get him. Obviously, getting to know him over the last couple weeks, he’s been a huge Iowa State fan for a long time. He’s going to bring a lot of athleticism, toughness,” Prohm said. “Obviously, he’s a great athlete, played four sports in high school. I think he’s a freshman that has a chance to come in and help us. Athletically, he’s really good. Tough kid. He can make shots. Versatile on the perimeter. Great kid and great family.”

As for Johnson, the Cyclones added a player with length, experience and proven scoring ability at the college level. The 6-foot-7, 195-pound wing, who visited Ames this past weekend, averaged 10.4 points, 4.2 rebounds and 1.6 assists per game this past season for the Trojans.

That talent could take a jump if Johnson is able to utilize his sit-out year the same way two of the program’s most recent sit-out transfers did in 2017-18.

“I think he has a chance. He had two good years at Troy. Brings a lot of length and versatility. He’s really a guard, especially when we play four guards. He’s really a guard. He can make threes. He’s got great length,” Prohm said. “I just think with a sit-out year of getting bigger and stronger and really working on his skill level, he could take a huge step if he’s able to use the sit-out year like guys like Marial and Mike and some other guys have done in the past.”

With those two additions locked up and a handful of players returning from a Big 12 Tournament championship and NCAA Tournament team, it seems likely the program will be able to better sustain success despite turning over a large portion of the roster similar to the situation following the 2016-17 season.

That feeling could be even further solidified if the Cyclones can add one more piece capable of making an instant impact. Perhaps that role could be filled by Penn State transfer Rasir Bolton, who is rumored to have a potential shot at immediate eligibility despite playing just one season for the Nittany Lions in which he averaged 11.6 points per game.

“I do think we’re a lot more suited to handle (the roster turnover),” Prohm said. “I think we’ve got some kids (returning) plus hopefully some freshmen that can step in as well. To add one more guy would be huge.”