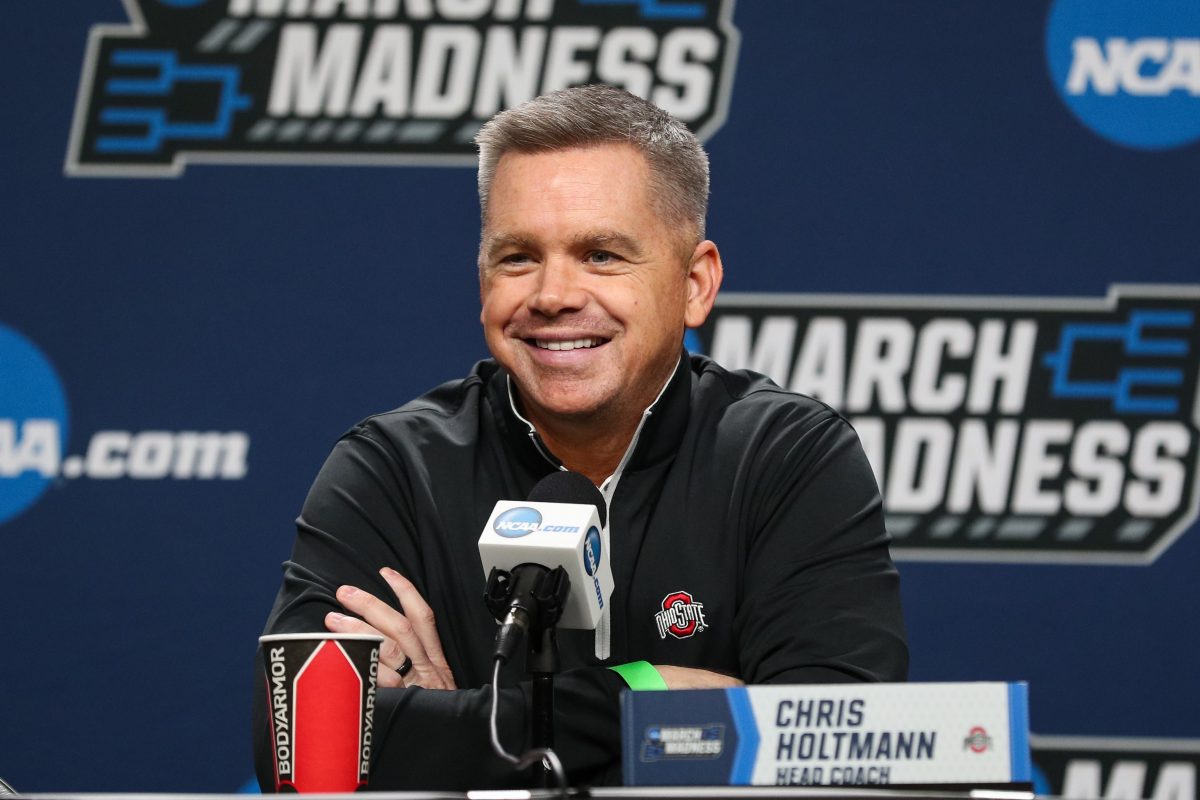 THE MODERATOR: Our final team today is the Ohio State Buckeyes. We are ready for questions at anytime.

CJ, how different is it for you, CJ coming in as a senior this year as compared to last year to the NCAA Tournament? And also you, Keyshawn, about your experience about being a Buckeye and playing in the tournament?

C.J. JACKSON: It’s a little different because I got a year under my belt. Last year I really didn’t know what to expect. We were just happy to be there, and this year, you know, we made the tournament and we’re excited about that, but we’re here to win some games.

KEYSHAWN WOODS: Being here as a Buckeye, great feeling, a blessing. This is my first time really being with a guaranteed spot and I’m just happy to be here. Like CJ said, now we’re in and happy to compete and continue to play.

What challenges do you guys see from backcourt of Iowa State? They play four guards a lot. How do you plan to match up?

KEYSHAWN WOODS: They’re a great offensive team. They play real, real fast. They have every piece that you can have on a basketball team. But for us, we just got to bring our defense on the road, and our defense is going to lead us to a win — to win this game. As long as we do, live up to our defensive principles and stick to those, we’ll be fine.

C.J. JACKSON: We got to make sure we bring our defensive hat tomorrow and be ready for anything. We know offensively they play well together, they have really good chemistry and had a unbelievable year, especially in the Big 12. We got to come ready and prepared and prepare our game plan for the rest of tonight and tomorrow, we should be ready.

How big was that Indiana game just in terms of momentum for you guys? We all knew it was big for getting in the tournament but just from a personal level?

C.J. JACKSON: I think it was huge for us. We had all our pieces back after a couple weeks and we was able to get an Indiana team that was hot at the end of the season. We really needed that for momentum coming into post-season.

KEYSHAWN WOODS: Like CJ said, the most important part about that, we had all our pieces, and just to see all of us fight, you know, really excited for all of us playing together like a team and being really, really connected in that game was what was most important to all of us and it showed — with us getting that win that got us here, we’re where we’re at now.

THE MODERATOR: Anything else for the Buckeyes of Ohio State?

Okay. Gentlemen, thank you very much and best of luck tomorrow.

THE MODERATOR: Head coach of the Buckeyes is with us, Chris Holtmann.

CHRIS HOLTMANN: Okay. Excited about obviously tomorrow night, late game. We’re playing a terrific Iowa State game, who has had an outstanding year. Steve and his team obviously have been playing really well here of late.

We are excited, like I said, about the opportunity. I think we’ve had some really good moments of play here in the last couple of weeks really in the last week and a half. So going to be a great challenge, but most of these games this time of year are.

THE MODERATOR: First question right there in the aisle. Thank you.

Chris, if you would talk about the significance of consecutive years in the NCAA Tournament and just how a program shoots to try and be in the tournament more often than not.

CHRIS HOLTMANN: Well, you know, Paul, I think it’s really important for your program as — when you take over, as you’re trying to kind of grow it in the way that you and your staff would like for it to be, I think you want kids who are excited about playing this time of year and have that as a goal, and not only playing but advancing and moving forward and playing as long as possible.

We always talk about wanting to recruit kids that want to play for championships and I think that’s going to be really important for us as we move forward. We’ve obviously got a lot of young guys on our team. That’s been well-documented. I think having those guys get some experience last year, although, you know, we have some of those young guys who didn’t play a whole lot in last year’s two games. They’re going to play a lot in this year’s game. Having our young guys currently on our roster is going to help us moving forward. Can’t overstate how important it is to be able to start off these two years and be in the tournament.

Chris, just a few minutes ago Bob Hurley was up there, sitting down, talking about the emotions of going against his former school. You went through that last year when you played Butler. Can you just kind of explain the emotions that a coach goes through playing the school where he built something just a few years before?

CHRIS HOLTMANN: It’s miserable. It’s miserable. It’s the worst coaching experience of my life. I hate to overstate it, but I’m really not. That was pretty fresh, given I think there’s been, what, three, four years. Four years. So it’s different. But you still feel tied in a lot of ways emotionally to the program and to the school.

Our staff was six months removed really. So the timing of it was — was miserable. You have very conflicted feelings. You feel compelled to prepare your current team as well as possible and yet, at the same time, in our case, you know, we recruited all those guys and there’s — it’s a conflicted feeling. I think you wouldn’t be human if that wouldn’t be the case.

The good thing for him is there’s been some separation of years. And I don’t know how many players that he recruited, but obviously he recruited the coach and there’s some emotional ties there.

We asked the basketball coach over at Oklahoma all the time about managing in the shadow of a football giant. You’ve covered this ground with probably your beat writers up in Columbus, but while you’re here I’d like to ask how — your philosophy on that and how you’ve accepted that challenge especially coming from Butler where obviously basketball maybe was on a different plane in terms of the athletic department.

CHRIS HOLTMANN: Are you telling me we’re at a football school?

CHRIS HOLTMANN: Breaking news. You know, it’s interesting. I do think there’s some real — talked a lot about that. It’s a different — right, it’s different. Butler where it was driven really in a lot of ways by men’s basketball. It’s a dynamic that — in a lot of ways I’ve really enjoyed seeing a program that has been so successful for so long and I’ve kind of — we’ve tried to really embrace that and use it for what we believe the strengths that it can be for our program.

I think that anytime you are — you know, working alongside programs that have achieved excellence, that can be inspiring, encouraging. That can be a real positive thing. That’s how we’ve chosen to look at it. That’s how we’ll continue to do that.

We’ve really enjoyed it. Certainly it’s different. The passion in some ways are different when — I get that and I understand that. And I think I had a decent understanding of it going in, but it’s still, once you’re in it, you recognize it for what it is and we’ve kind of chosen to embrace it.

Have you embraced it to the point where you use that in terms of recruiting?

The guys at UO, for instance, will gladly show off the stadium on fall afternoons. Is that something you do up in Columbus?

CHRIS HOLTMANN: I think part of that, part of embracing it is in fact that. Showing — whether it’s facilities or, you know, number of times where we’ve had recruits spend time with Urban in the past, and we’ll do it with Ryan in the future.

Absolutely. I think that’s part of it. Our staffs have collaborated on things, talked about recruiting a lot. We’ve even — there have been some football basketball recruits we’ve spent time with. It’s going to continue to be that.

We have a tremendous AD in Gene Smith who I think recognizes, as we all do, how important football is. But also I think he has an appreciation for what we can be as a basketball program, and that’s all you can ask for.

Having a guy like Keyshawn Woods as a senior, playing the way he has as of late, and does that kind of make you think that it’s a guy that sees where his career is and doesn’t want it to end any sooner than it has to?

CHRIS HOLTMANN: We’ve talked about this, you know, I think there’s been tremendous value in just that what you said, him being a guy who is one of our better players, who his goal from day one has been how do I get to the tournament, and that’s been his focus and that’s been his mindset. He understands that what happens next in terms of his future, he’ll continue to play. But really his focus has been “How do I get our team to the tournament.” And he’s been successful in doing that. Obviously he wants to stay here as long as possible.

So, you know, it’s encouraged us to maybe look at that type of a young man in another recruiting class, because I think the addition of him — it’s different. This group needed some experience in a lot of ways. It was imperative. He’s had great — that mindset and that approach has had great value for us.

Your team played a Gonzaga team last year in the run of 32 that was coming off of a WCC title, coming off a Big 12 Tournament title this year. Is there anything different that you tell your teams in preparation for a team that is on a streak or coming off a conference title?

CHRIS HOLTMANN: You have to recognize how much confidence they’re playing with right now. And I think it means — it’s important for us to have a good start. We did not have a great start in the Gonzaga game. We were fortunate to climb back and actually take the lead in the second half.

I do think the reality is they’re playing as good as a handful of teams in the country, they are. And we know the environment is going to be very much a road environment and we expect that, given how well they travel and the location.

THE MODERATOR: Anything else for the head coach of Ohio State? Okay. Thank you, Chris, and best of luck. 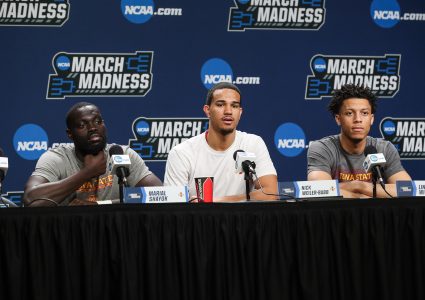 TRANSCRIPT: Cyclones at the podium in Tulsa