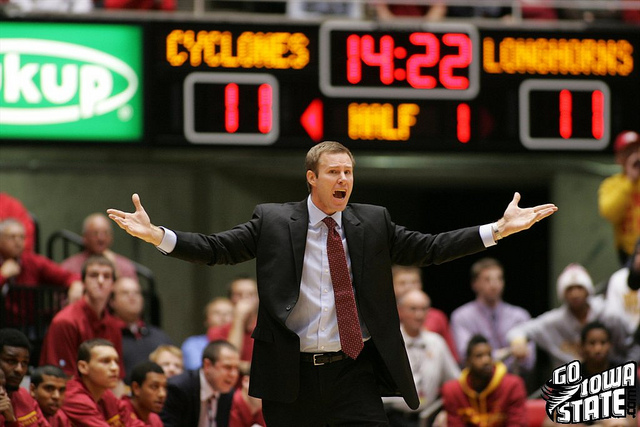 The following is a transcript from Fred Hoiberg’s appearance on Monday’s Big 12 Teleconference with the national media. Iowa State will face UConn in its NCAA Tournament first round game on Thursday at 8:20 CT in Louisville, Kent.

Q: Was there a point in the season where you thought this would be a tournament team?

FH:Yeah. Even before the season started, I saw how talented that group that we brought in was on the scout team. We had a great trip over to Italy. We were able to practice for 10 days with these guys and get them together and mesh the transfers who sat out last year with the guys who we had coming back. You could just see the commitment that they had and the hunger that they had. They wanted to turn things around from the previous season. I saw it then. We started off a little sluggish and had some bumps along the road but we really came together during the conference season and when we play together, we’re a very good team.

Q: Did you foresee Royce taking over the roll that he did early, at that point/forward position?

FH: Last year on the scout team, he mostly played on the block. He played the opposing team’s best big man and there just aren’t many people like him. He’s such a unique player. You could tell how good of a passer he was but not at a point/forward role. He really showed what he could do when we went on that trip. It’s such a benefit to go on trips like that and to experiment with different lineups. Not having a true point guard after losing Diante Garrett, we needed someone to handle the ball and a lot of times, he is our best option.

Q: A lot of people focus on Royce, I am interested in what Chris Babb has brought to the table from your perspective?

FH:Chris Babb is as important as anyone on this team, just from the fact that he is guarding the other team’s best perimeter player night in and night out, whether that is a point guard or that is a 6-8 small forward. He does such a good job of making players take tough contested shots. That’s such an important role. If you don’t have a guy on the perimeter who can slow down the other team’s best player who they are used to going to, it’s tough to win games. He’s struggled with this shot midway through the year but he still hit some huge ones for us. He hit a big one to seal the game against Kansas. He hit a couple of big ones against Baylor in the second half. Even if he’s not making shots, he still has a huge impact on winning so you can argue that Chris is as important as anybody. The one thing that disappointed me with the end of the season awards was that he wasn’t on the All Big 12 Defensive Team because he did such a good job. If you just look at the numbers of the guys that we played against that were the top players in the league and how he did on them. I was very pleased with Chris this year and he’ll be one of the most important guys on our team next year.

FH:That’s a great question. I think the better question would be with Tyrus Mcgee and that there are three guys from Springtown, Okla. playing in the tournament. But yeah, when you look at that team that they had, winning back-to-back state championships, all three of those guys have had huge roles on those teams. There haven’t been many players from Ames playing on a big stage like this for a long time. I’m happy for those guys. It’s great for the community. It gives people a lot of rooting interest, not just for the home team but the teams that those other guys are playing for. It’s a great story in the second round potentially where Harrison (Barnes) could meet up with Doug (McDermott). It’s fun to watch those guys. When I was working in the NBA, it was great to watch those guys on ESPN playing in high school. It makes you proud to know that you have people playing at a high level. Not only that but they are great kids and they represent our city very well.

Q: After having a night to digest Connecticut and looking at tape on them, what have stood out to you about that team?

FH: You kind of watch them and have them on the in the background but you never do in-depth scouting on a team if you’re not going to play them. We really got into it last night. We watched several games as a staff together. The first thing is that they are huge. Their front line with Oriakhi and Drummond, it’s tough to score on them in the paint. When you look at Roscoe Smith who starts at the three at 6-foot-8, it’s as long of a front line as we are going to play against all year. Their guards are extremely quick and talented. Jeremy Lamb is an unbelievable talent. It’s a great team and they are playing their best basketball of the season right now. It’s going to be a tough matchup but I feel our guys are playing well right now and we’ll come out and give our best effort.

FH: I have not talked to him since the announcement. I see him on the road quite a bit. We recruit out in that area. We got Georges Niang from Tilton Academy in Connecticut’s recruiting several players on that team as well so Kevin is one of my all-time favorites. He is such a good guy and such a good person. He’s all about the right thing. He’s one of those guys that got the most out of his abilities and his body. He is such a good person. In a league that has the perception sometimes of not having those types of personalities, he certainly brings a positive light to the NBA because of the type of kid that he is. Going all the way back, Kevin and I took a visit to Arizona at the same time. Lute Olsen told both of us that they’d take the one guy who commits. Obviously neither one of us went there gut we go back a long ways. He’s a friend and I’m proud to call him a friend.

Q: I was wondering if you could talk a little bit about your 3-point philosophy. I believe that Florida is the only team in the tournament that makes more threes than you guys do. Do you go into games with a number of how many you want to take or how many you want to make or that sort of thing? Is it based off of numbers or is it free wheeling based of off what comes open?

FH:It’s based on how the defense plays us. We get played different ways almost every game just because of the uniqueness of our team. Not many guys have a big guy like we have in Royce who can create not only for himself but also his teammates. To answer your question, we don’t go in with a specific number in mind. We try to take what the defense gives us. We try to play smart basketball. We try to get great movement. We try to have great spacing and if we do those things, that’s when we create open shots.

Q: Have you seen anything very unusual from a defense to try and stop what Royce can do?

FH:We’ve seen it all. We’ve seen zones. We’ve seen a lot of man, some pressure man and some sagging off man. Some double-teams coming from the baseline and doubles coming from the top. We’re ready for all of that. We’ve attacked it all very well. The big thing for us is to get people in the right spots and try to attack whatever defense the opposing team plays.