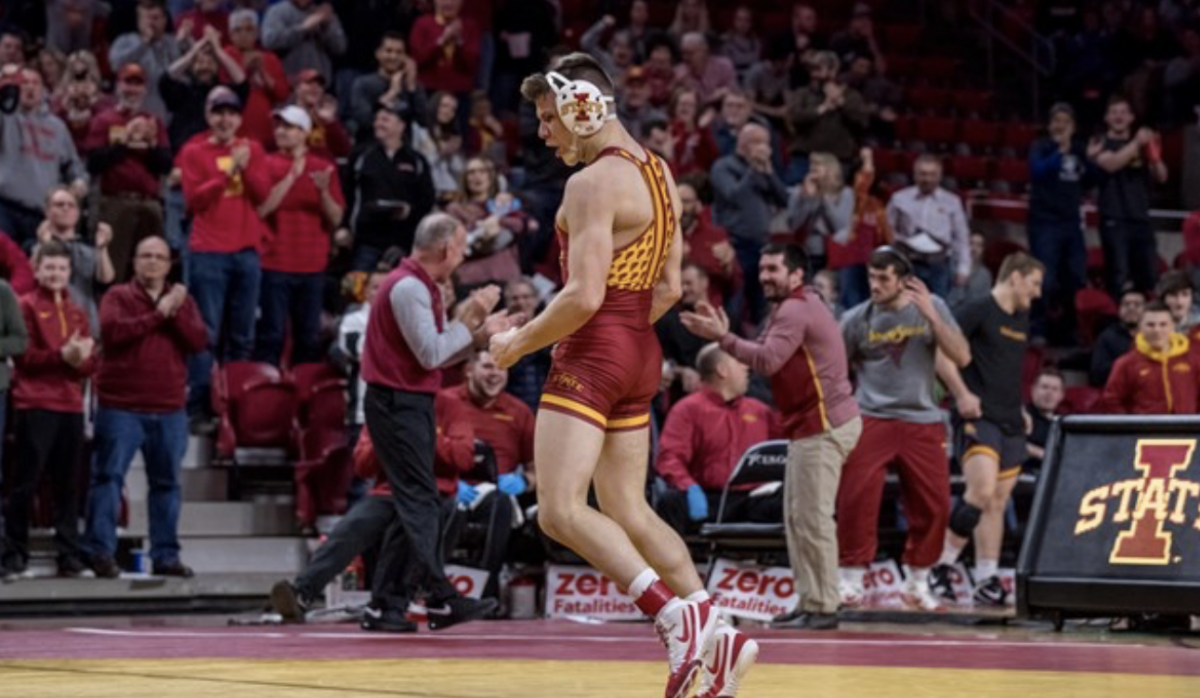 The last time the Iowa State wrestling team shut out a conference opponent was on Feb 1, 1996. That was a 45-0 win over Missouri. The majority of the current team had not been born yet.

On Friday, the Cyclones dominated their way to a 47-0 shutout over South Dakota State.

Redshirt junior Chase Straw started the night for the Cyclones and came ready to prove himself.

“It clicked a little bit with him,” head coach Kevin Dresser said. “Last week I was fussing at him because he was very tentative.”

Straw played catch-and-release with his opponent pulling an 11-4 decision to start Iowa State on the right foot. He did not allow a single takedown.

“When we drew 157 again tonight he went out and made it happen right away,” Dresser said. “I feel good about Chase Straw. I think Chase Straw is a guy who can contend for a Big 12 title, that’s how much confidence I have in him.”

For the rest of the night, Iowa State only allowed three takedowns compared to SDSU allowing the Cyclones to garner a total of 38. This was a drastic difference compared to the week prior where only three Cyclones were able to hold off any takedowns.

It was announced earlier this week that freshman Logan Schumacher would be sitting out for the weekend due to a dinged up knee. Freshman Zane Mulder was the next guy in line.

Mulder went up against senior Logan Peterson who had an overall record of 12-12. The true freshman walked onto the mat for the first time and dominated his way to a surprising first period fall.

“You never know when you throw a freshman out there,” Dresser said.

There wasn’t a person in his or her seat at the sound of the buzzer.

“I was just thinking, ‘Let it fly,”‘ Mulder said. “I had intentions of going out there to win it. I wasn’t going to lose that match.”

The rookies on the team have shown a hopeful and promising future in several areas of the lineup in regards to the rebuild of Iowa State.

Mulder did burn through his redshirt though. For Dresser, opportunities don’t always come knocking.

“Some people might say that I am crazy for suggesting that he pull his redshirt,” Dresser said. “I am a strong believer in when you get opportunities, sometimes you take them no matter how long or short. You can’t tell me that what happen at Hilton didn’t do something for Zane Mulder.”

Mulder will start once again on Sunday against Utah Valley.

CFTV: Dresser discusses the exciting win from Zane Mulder that resulted in a pin in his debut. pic.twitter.com/6rtEGT0awR

Jarrett Degen has always been a threat to pull major bonus point wins. Degen is also a guy who most likely never gets the first takedown.

“If Degen scored first, we’d all fall over,” Dresser joked during the post-dual press conference.

The redshirt sophomore did however end the night for the Cyclones in impressive fashion with a much needed pin in his favor.

Degen continues to struggle allowing himself to get caught early on in the first period. Although the 149-pounder was able to turn that around in his favor in a third period reversal that brought major confidence to the rest of the match, that can be a red flag come March.

“Like Dresser said, I’d shock anyone if I got the first takedown,” Degen said. “I’ve been working on my offense trying to get that first period going a a little bit, doing a little bit of different technique.”

Heavyweight Gannon Gremmel walked away with a 5-3 decision win and garnered a 1:43 of riding time. The biggest concern the redshirt sophomore brings is the confidence he lacks when he is on the mat.

The question doesn’t come from his technique or his physicality but more of he continues to second guess himself?

There were no points scored in the first period and Gremmel rode the entire second. Once the third period kicked off, something ticked and Gremmel was able to get the much anticipated takedown. In the last few seconds, the heavyweight seemed to second guess himself, which resulted in his opponent to get a too late of takedown.

“He did a really good job for six minutes,” Dresser said. “I’m going to fuss at him for a bit for that last minute. You need to go get that last takedown and that’s just a mentality thing that we have to continue to work with him. But I like the direction of Gannon.”

The Cyclones will practice at 1 p.m. on Saturday as they prepare to host Utah Valley on Sunday at home.