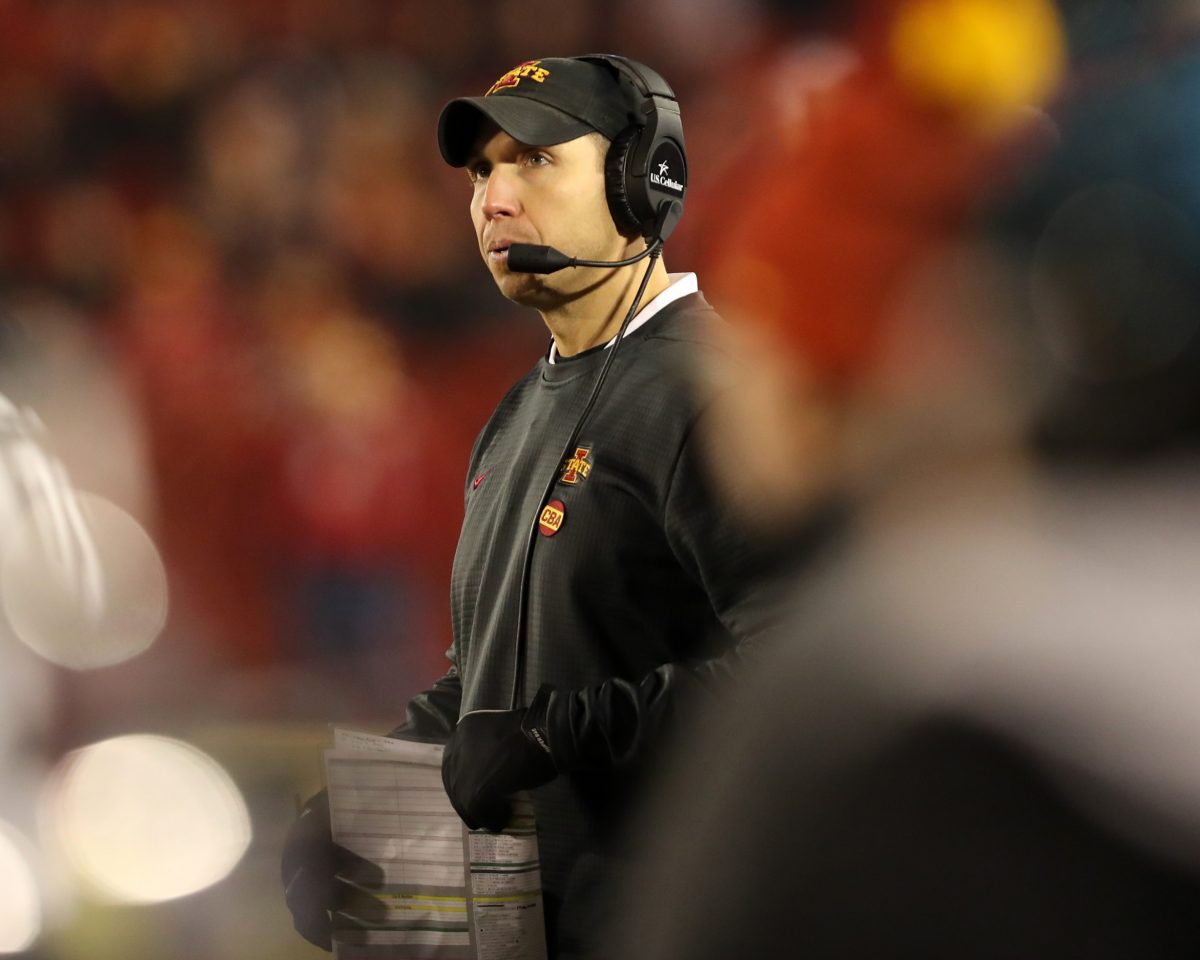 AMES —  It was so innocent, Iowa State football coach Matt Campbell thought nothing of it.

Highly touted recruit Breece Hall had requested No. 28 as his jersey, and Campbell simply honored the talented running back’s choice.

So the university updated its roster to reflect Hall’s signing — and designated number — and criticism then started percolating on social media, since that was obviously former great Troy Davis’s number.

Davis himself even suggested he felt slighted on his Facebook page, and a seemingly simple matter suddenly became fraught with a modest degree of controversy.

Campbell, to put it mildly, was confused.

“So innocent that it blindsided me,” Campbell said Tuesday in his office. “And I only say this, with this poor Breece Hall. He wanted to wear 28 because his stepfather, who played at Nebraska and played in the NFL for the Kansas City Chiefs, wore 28. Breece had asked — and the number thing, to me, it’s important. If you’re a ding dong, I give you a bad number, but if you do right, I want you to have the opportunity to pick a number. And, shoot, I didn’t think anything of it, because literally Seneca Wallace, another phenomenal player, is wearing, (the same number 15 as current quarterback) Brock Purdy.”

So enough about numbers — except for those associated with ISU’s top-50 recruiting class, of which Hall is one of the standouts.

He’s already enrolled at ISU, along with a handful of others in a class that Campbell says will deepen the talent pool for a surging program rippling with competitiveness at all position groups.

“I think, really, positionally, across the board, you’re seeing us now add layers of depth,” Campbell said. “And you even talk the running backs, well, we can’t forget that we’ve got Sheldon (Croney), and we can’t forget that here’s a kid coming back for his senior year and when we’ve asked that kid to show up for us, he’s showed up in a really good way. Kansas State two years ago and Oklahoma State this year, where he got those opportunities and took advantage of it — and even his run in the bowl game. It’s, gosh, pretty good. And Kene (Nwangwu) is a guy that hasn’t been healthy and missed a lot of spring ball last year and (was) limited in fall camp and you would have said two years ago, before he got injured, here’s a guy that’s gonna fight with David (Montgomery) for playing time and compete in that and now all of a sudden you get him back — and Johnnie Lang, same thing. Just health standpoint, so then you bring a Breece and you bring a Jirehl (Brock, ISU’s highest-rated recruit, according to 247 Sports) and Leonard Glass, where does he fit, position flexibility, because he can be an elite runner, but he’s also got so many position flexibility opportunities for us that now you’ve got competition.

“And I do think across the board — running back you say, because you lost David, but you look at positions like O-line, and you look at D-line, like, who’s playing? Some of these young guys we’ve got now in our program that’s got great depth and you’d better go to practice every day, and you’d better go to the weight room every day. You’d better go to work or somebody’s gonna take your job. And that’s where we’ve finally got some real health to our football program that now can allow us to — can our best become the standard of this program? We haven’t lived like that yet and that’s when things can really start to take off in a powerful way and I think we’re a lot closer to that today than we’ve ever been.”

Hall, from Wichita, Kan., and Brock, from Quincy, Ill., may be the headliners of a class that will fully take shape once the traditional National Signing Day comes tomorrow, but Campbell’s jazzed about the entire group — and for good reason.

“I think the one thing we looked at (with) this class at the (early) signing day in December, it was almost like what we said when we got here,” Campbell said. “We’re gonna recruit the Midwest. We get the best players out of Kansas. We get the best players out of South Dakota. We get some of the top players in-state. We’re able to, at the end of it, get some of the top players in Illinois. Some of those things are really important to us, and continuing to lay the fabric and the culture — and not only just get good players, but get guys that we identify as our kind of guys. That’s what I’m excited about, this class.”

Campbell said the program might add a player or two tomorrow, with possible grad transfer additions also looming, but otherwise it will be a business-as-usual day, which is a very good thing.

If only the same could be said for the seemingly innocent decision to honor an incoming recruit’s family-based jersey request.

And perhaps it can be, now.

“You hope that our program’s good enough that we do a great job of honoring those guys that wore great numbers and they’re proud of the guys who are wearing the numbers,” Campbell said. “That’s how I’ve always felt, because I came from a program that had great success and I never thought of that. I always thought that it was neat that guys came back — former players came back and said, ‘Man, that guy’s wearing my number,’ and they took pride in that.”