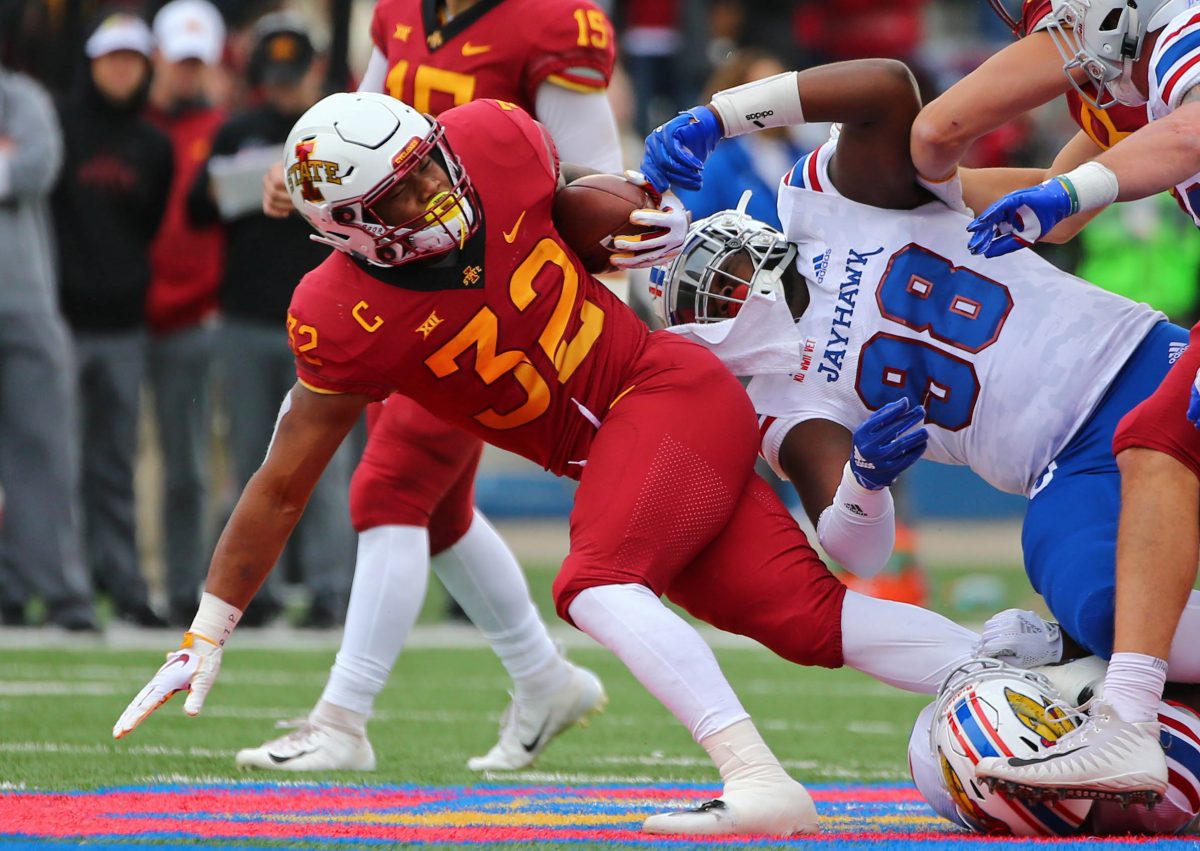 All of which means … nothing, unless you’re obsessed with style points.

Hear what Matt Campbell had to say after Iowa State’s win over Kansas in this CFTV. https://t.co/qx2pKR7OBH

Montgomery carried the football just 14 times, but was effective as usual, bowling Jayhawks defenders over for 64 hard-earned yards — a 4.6 per tote average.

But were the Cyclones consciously limiting his touches in order to help ensure he remains fresh down the stretch?

To some extent, of course, but …

“Again, I think it’s also the belief of we’ve got some other really good football players,” ISU coach Matt Campbell said after his team improved to 5-3 overall and 4-2 in the Big 12 with its fourth straight win. “I thought Kene (Nwangwu) ran the ball really well at times today. Johnnie (Lang) had a couple really nice runs, which is great to see. Sheldon (Croney), back at it. So for us, I think that continuing to use those guys (is important), because we will need them as this stretch run continues for us.”

Campbell said after the game it’s too early to know the severity of cornerback Datrone Young’s shoulder injury that was sustained in the second half. Young has 12 tackles and two pass breakups this season as a valuable backup.

“What the extent of it is, where it’s at, I don’t know, but he’s been playing really good football for us, so if it is an extended injury it certainly would be a loss, but somebody else will have to step in and be ready to roll,” Campbell said.

Matt Leo didn’t treat his first career start at defensive end any different than he did as an active reserve.

“Sticking to every week, taking every week seriously, trusting the process and being present in that week; not looking in advance, not looking at how other teams are playing in the Big 12 Conference,” Leo said of his approach to the game, which mirrors his teammates. “Just knowing that we’ve got to be present for each week.”

Matt Leo gives his thought on the crowd and Iowa State’s defensive performance in this CFTV. pic.twitter.com/ZyohQEx4iQ

The 6-7, 276-pound redshirt junior from Australia recorded a team-best three tackles for loss in Saturday’s win and held his own on the outside in place of injured starter Enyi Uwazurike.

“I think in general, I thought, played a really good football game,” Campbell said of Leo. “Here’s a guy that had to step in and be the starter now. His job status elevated a little bit and I think that was huge for him to go in and really continue to have success. He played 62 snaps last week. I don’t know what it was this week, but you’re talking about a guy that we felt as the season started was a starting-caliber football player. And now that opportunity’s coming and I think he’s really taking advantage of it. So whether they were testing him or running at him, I thought Matt really stood in there and played a really good football game for us.”

Kansas entered Saturday’s game tops among power five teams in turnover margin at plus-16. Now it’s at plus-15, thanks to Brian Peavy’s forced fumble in the second quarter and a turnover-free effort from the ISU offense.

MORE LOVE FOR THE FANS

“Let me credit the fans. It’s powerful when you go on the road and you have a fan base that’s willing to stay the course with us. They’ve been a huge factor all year. It’s really neat in the third and fourth quarter of a football game and the fans were incredible.” — Matt Campbell

Peavy’s key strip gives him five forced fumbles in his career. … Jamahl Johnson’s fumble recovery was the first of his career. … Deshaunte Jones caught four passes for 31 yards to extend his streak with at least one catch to 31 games, which ranks second all-time in program history. … The Cyclones averaged 6.5 yards per play to Kansas’s 4.0 yards per play. 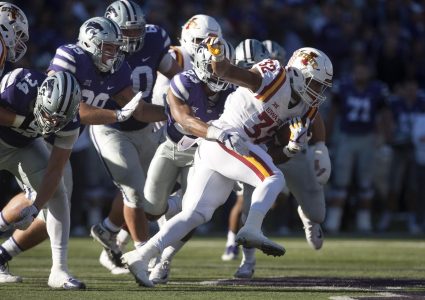