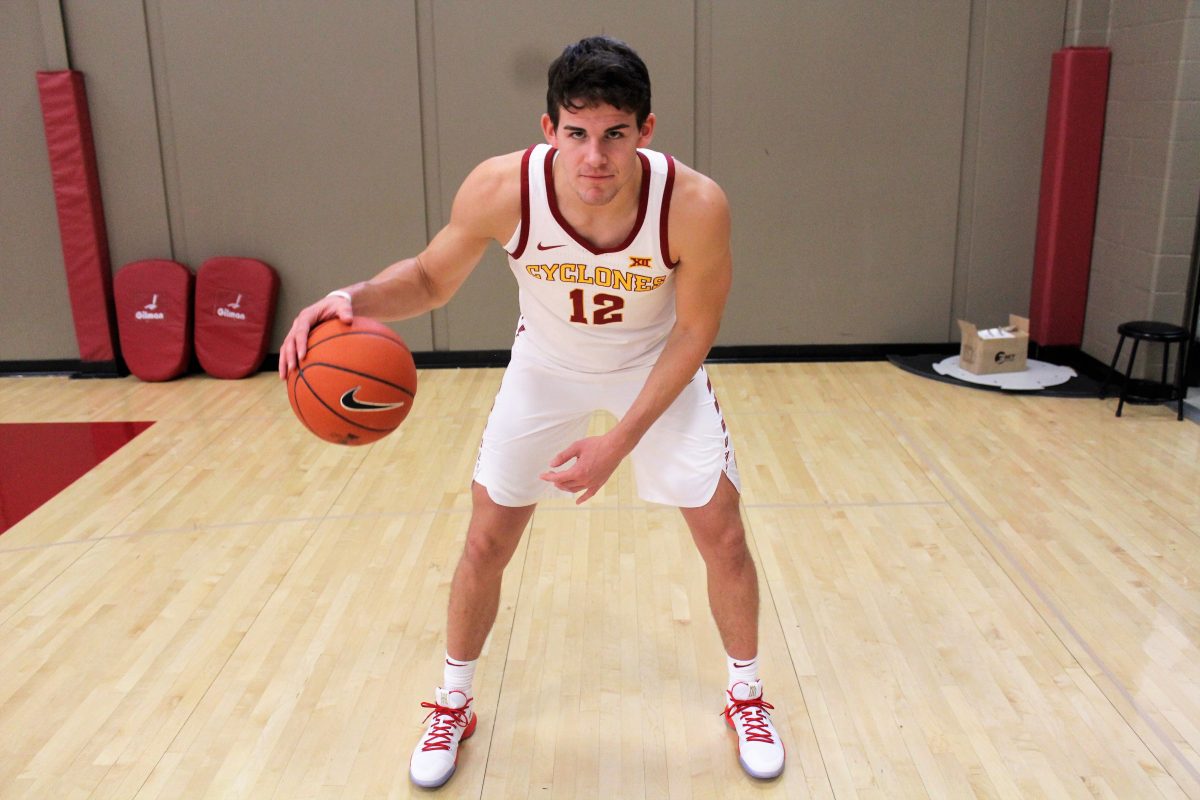 Michael Jacobson dribbles a ball during Iowa State Men’s Basketball Media Day. Because he transferred from Nebraska, Jacobson will take the floor for the Cyclones for the first time this season as a junior.

AMES – Well, it was certainly a lot better than last year’s home opener.

Iowa State jumped out to an early lead on Tuesday at Hilton Coliseum against Alabama State. Steve Prohm‘s struggled mightily in the middle, including a nearly six-minute stretch towards the beginning of the second half in which the Cyclones scored just four points. Then, they rode three freshmen and two sophomores on a 19-5 run towards a 79-53 season-opening win.

“I thought our energy with that one group in the second half was a big difference,” Prohm said. “We had some opportunities in the first half to extend leads and had some missed shots, had a couple breakdowns, but it’s good to get some film against live action in front of people.”

On the night Talen Horton-Tucker made his much anticipated Iowa State debut, it was Tyrese Haliburton — the “other” freshman guard — who stole the show. The 6-foot-5 Oshkosh, Wis. native scored 12 points on 5-of-6 shooting while adding four assists, four steals and three rebounds.

“I thought (Tyrese) was good. I thought he was good. I’ve said a long time I think he embodies what I want in this program. He embodies what’s made this program really good in the last seven years with personality, charisma, character, ability to make people better,” Prohm said. “He’s got great length and size for that position. He can make people better. He was really good. But, this was game one. Now, he’s got to be good tomorrow. He’s got to watch tape. He’s got to understand where he’s got to grow because now people have film on him and they’re going to scout him.”

“My teammates found me and just brought energy,” Shayok, who sat out last season after transferring from Virginia, said. “Just the work I put in last year, I’ve envisioned this for a whole year sitting out. It felt good being out there again.”

As a team, the Cyclones shot 47.8 percent from the floor and 38.5 percent from 3-point range with 10 makes. They held their opponent to less than 60 points while Prohm mixed and matched a plethora of different lineups.

It was exactly what a season opener should be and was a far cry from last year’s season-opening blowout loss to Missouri. Oh, by the way, those same Tigers will be in Ames on Friday and there is little doubt these Cyclones remember last year’s drubbing in Columbia.

“Last year was tough, man. I mean, it just was,” Prohm said. “We just weren’t ready for that moment a year ago. We just weren’t. Whether it was leadership, new faces, it was good to go through that from the standpoint of me personally. Just so I know things that we have to do better. You have to be humble in success and you have to be humble in failure, too. I said that a couple times in the offseason. We have more stuff in (than last year). I think we do have more of an identity right now.”

Lard and Talley suspended until December

Iowa State played its first game of the season — and will subsequently play the first month of the season — without two crucial pieces of its frontcourt. Star sophomore center Cameron Lard and junior forward Zoran Talley are both suspended until at least December, Prohm announced after the game.

“With Cameron, first and foremost, it is my job, not just as the basketball coach but as a leader of mean to continue to challenge him to grow, to do great things,” Prohm said. “He’s making really great strides, very, very good strides. But, there’s accountability for actions. When you don’t make good decisions, when you don’t do the right things. Him, along with Zoran Talley, due to things that he’s done that aren’t up to the standards of our program, both of them will not play until December. We’ll reevaluate that at the end of the month.”

Lard’s suspension comes as no surprise following a string of legal issues last spring that ended with him spending the summer away from the program in a wellness facility. The 6-foot-9 Louisiana native averaged 12.6 points and a team-high 8.1 rebounds per game as a redshirt freshman last season and was an honorable mention preseason All-Big 12 selection entering the year.

Add on top of that losing Talley, who averaged 7.5 points and 4.0 rebounds last season after transferring from Old Dominion, plus the loss of junior Solomon Young, who is out six-to-eight weeks with a groin injury, and Iowa State’s frontcourt is suddenly a lot more thin than was previously expected entering into the season.

“We just keep playing, just trying to get better each day,” Jacobson said when asked about how the suspensions change his role. “George (Conditt) is catching on really well. He played well in the second half (on Tuesday), did some good things. I’m just going to keep bringing the energy that I bring and the leadership that I can bring and some experience. We’re obviously going to need some guys to step up.”