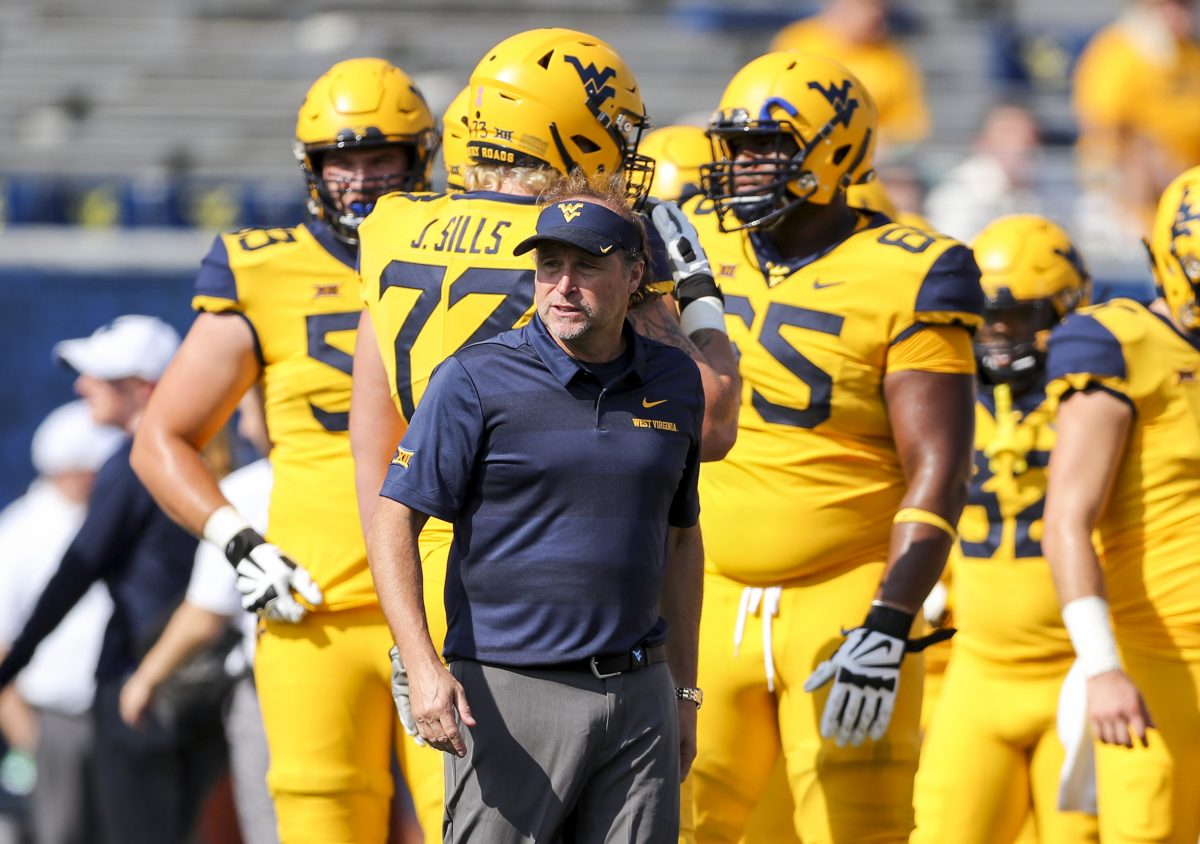 Each week during the football season, we will give you a collection of links, videos, quotes, and numbers to help you better get to know Iowa State’s upcoming opponent. This week, the focus of our Know the Opponent feature are the West Virginia Mountaineers.

*** West Virginia’s star quarterback Will Grier turned the ball over four times in the team’s win last week over Kansas. He is looking to fix those mistakes this week against the Cyclones. (Charleston Gazette-Mail)

*** The Mountaineers have been thin in the secondary recently due to injury, but two of the replacements give the team confidence after grading out well in the win over Kansas. (West Virginia MetroNews)

*** True freshman tailback Leddie Brown has emerged as a star in the making for the Mountaineer offense. Dana Holgorsen says he doesn’t play like a typical freshman. (West Virginia Illustrated)

*** One of the biggest keys for West Virginia’s offense this week will be to solve their revolving door at the right guard position. (West Virginia MetroNews)

“Offensively, they’re searching a little bit for their identity, so to speak, because of some injury issues that everybody has to deal with at times. Their two main, old, leading players in Kyle Kempt and David Montgomery have been dealing with injuries. We’re expecting both those guys to be available and play. They’re really good players, especially Montgomery. He’s an All-American, NFL-type player, and he’s been banged up as of late, but we’re expecting him to play. He played against us last year — both of them — so we know what type of players they are, and we’ll prepare for those guys to be ready to go.”

“Obviously, with the switch at quarterback last week, it poses different challenges for us defensively with the (Brock) Purdy kid in from Arizona. He didn’t go in and play like a freshman. I don’t think I’ve seen a game one, freshman performance quite like that. Texas Tech had to put their freshman in game one and had some good performances, but it wasn’t like in the first one, like that Purdy guy did. It’s different; he runs around a lot better than Kempt does. That’s just not what Kempt’s game is. The (Zeb) Noland kid, No. 4, that has played a lot of games for them, he was probably a little bit more of a thrower and a scrambler, but they’re doing all kinds of quarterback run game with Purdy, which is a different challenge for us. With him in there, they look a lot like what we looked like two or three years ago with Skyler (Howard), as far as quarterback-run game, and different things that were coached up the appropriate way. We’ll have to figure that out when we get there. But we got a lot of good information to be able coach up at this point.”

“Their receiver, No. 18, (Hakeem) Butler, is making all kinds of plays. It seems like he’s got more than 18 (receptions) for 372 (yards) and four (touchdowns). It seems like he does, because he’s made a lot of big plays in a lot of big games. He’s a matchup nightmare. He’s a lot like the Texas Tech guys were. The other guy, (Matthew) Eaton, is another 6-4 guy. Those two tall guys on the outside pose the same challenges from a corners’ and covers’ perspective than the Texas Tech guys do. We’ll have to keep our eye on that. They will keep getting better on offense. Last week’s performance at Oklahoma State was impressive, and that’s what we will be expecting moving forward.”

“Defensively, I have a lot of respect for what they’re doing. Coach (Jon) Heacock has done a great job and has taken a kind of odd stack with what we do here, and kind of put his own spin on it. It’s not exactly what we’re doing, but it’s got some of those principles to it. It starts with their (defensive) line. They’ve got three good (defensive)-line bodies, especially their nose (tackle), the (Ray) Lima kid and the (JaQuan) Bailey kid, the end and the nose. Those guys started against us last year; they’re really good players. Two of the three linebackers are back, and the two corners that started against us and got a lot of experience, it seems like they’ve been three- or four-year starters. The (D’Andre) Payne kid, No. 1, and the (Brian) Peavey kid, all-conference guy, No. 10, they’re legit players.”

“They’re really good players. They lost three senior safeties. They play a lot of the same coverage as we do. Whether it’s three guys back or one back, two guys down or two guys back, one hole player, the three safeties they had last year is what made that defense go. Those guys are all new, but other guys have stepped up, and they’re playing as good or better defensively than what they were last year. And they were a pretty good front last year, pretty good defense last year. So, they’ll pose a lot of the same problems Kansas did last week, in that they’re a quality defense.”

*** Holgorsen on Iowa State’s struggles to get going offensively early in the season.

“They lost their coordinator, they’ve had some coaching stuff, they had the injury to their main player, their quarterback. Like I said, their running back is so good, and they rely on him so much. They give it to him a lot. You don’t have him, then you surge. We’ve been in that situation before. These guys have been good on offense. They know how to coach it up. I think it’s just a matter of continuity more than anything. I know Matt (Campbell) has kind of taken over the play calling, and he’s obviously as good of a coach as there is out there, so they’ll keep getting better with it. I think they’ve found a good, young quarterback that can make plays (Brock Purdy). He ran around, he can make guys miss. He was accurate when he was throwing the ball. It was a good offensive performance. Whether that’s going to be the same thing against us, or whether they go in a different direction with Kempt, I don’t know. We’ll be ready for whatever they throw at us.”

“They’re disruptive up front. The biggest difference in what they’re doing this year and what they did last year is their front is a lot better. It’s similar to our stuff, it really is. They’re playing good up front, and we’re playing good up front with those three. And they’re creating some stuff with that three, but then they bring second-level bodies from everywhere – corners, safeties, linebackers. And you don’t know where it’s coming from. So, you’ve got to do a good job of identifying it. We’ve got to do better up front. We’ve got to do better up front as far as identifying it. We’ve had too many sacks, tackles for loss, and disruptions in the backfield last week that we didn’t have in the previous four games. So, we’ve got our work cut out for us. Offensively, up front, to figure out where that stuff’s coming from, because they do a very nice job with it, as we do here on defense, as well.”

“I thought their quarterback kept plays alive, that was the biggest thing. He ran around the pocket a little bit. I thought the run game was working well. He can obviously run the ball; he was their leading rusher. Then, they made some big throws down the field. You watch their first couple of games, and then you turn this one on, it looks like a totally different offense.”

*** Gibson on the simplicity of Iowa State’s offense.

“That’s one thing that you notice about Iowa State is that they’re very well-coached, they are very disciplined, they don’t create a lot of stupid penalties. I like coaching against these guys just because they’re really good coaches, they have good schemes. This is a lot better than some of the stuff we see in our league, actually. It’s real football, and it’s refreshing to see at times.”

*** Gibson on what David Montgomery brings to Iowa State’s offense.

“Obviously, we have to tackle him. That’s the biggest thing. Two years ago, out there, we struggled tackling him. Last year, here, we did a pretty good job with it, but he’s really elusive. He’s a powerful kid. Very rarely do you ever see him go backward when he gets hit, and he makes a lot of guys miss. (ProFootballFocus) does a thing on backs after the season, and last year, yards after contact and making people miss, he was the No. 1 running back in the country at doing that. He’s a really good player, and he doesn’t turn the ball over, either. I think last year he had one fumble, and it was in the bowl game.”

“Well, I’m not very smart, I don’t want to confuse myself. We’ll do what we do, and we’ll throw some different looks at him, obviously, like we do every week. We’re just so different. I guess the disadvantage we have this week is Iowa State does a lot of the same stuff we do, so there’s a lot of carryover that this kid has probably practiced against in camp. I don’t know if he’ll be phased by that, he seems like he knows what he’s looking at and knows what to do with the football. Just watching him against Oklahoma State last week, he made some plays and made them go.”

“These guys are very multiple with what they do – a little bit different than what (associate head coach – defensive coordinator/linebackers) (Tony) Gibby (Gibson) does. They cause confusion, and what they do is everything looks the same before every single snap. They are either playing man or dropping eight, they’ll zero pressure you, they’ll do all sorts of things. That’s why it’s a big week of being disciplined and making sure we’re going through the progressions and making sure that we’re ID’ed to the right guys because, potentially, there’s problems if we lose that lack of focus each play.”

“I just have to keep watching film and see what weaknesses they have and take advantage of that. It’s going to be a really good matchup this weekend. I look forward to it.” 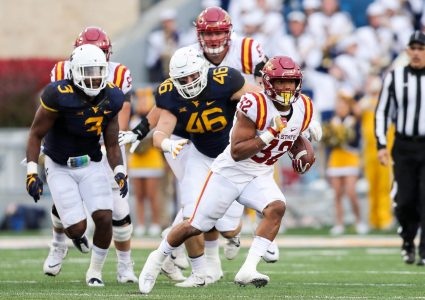