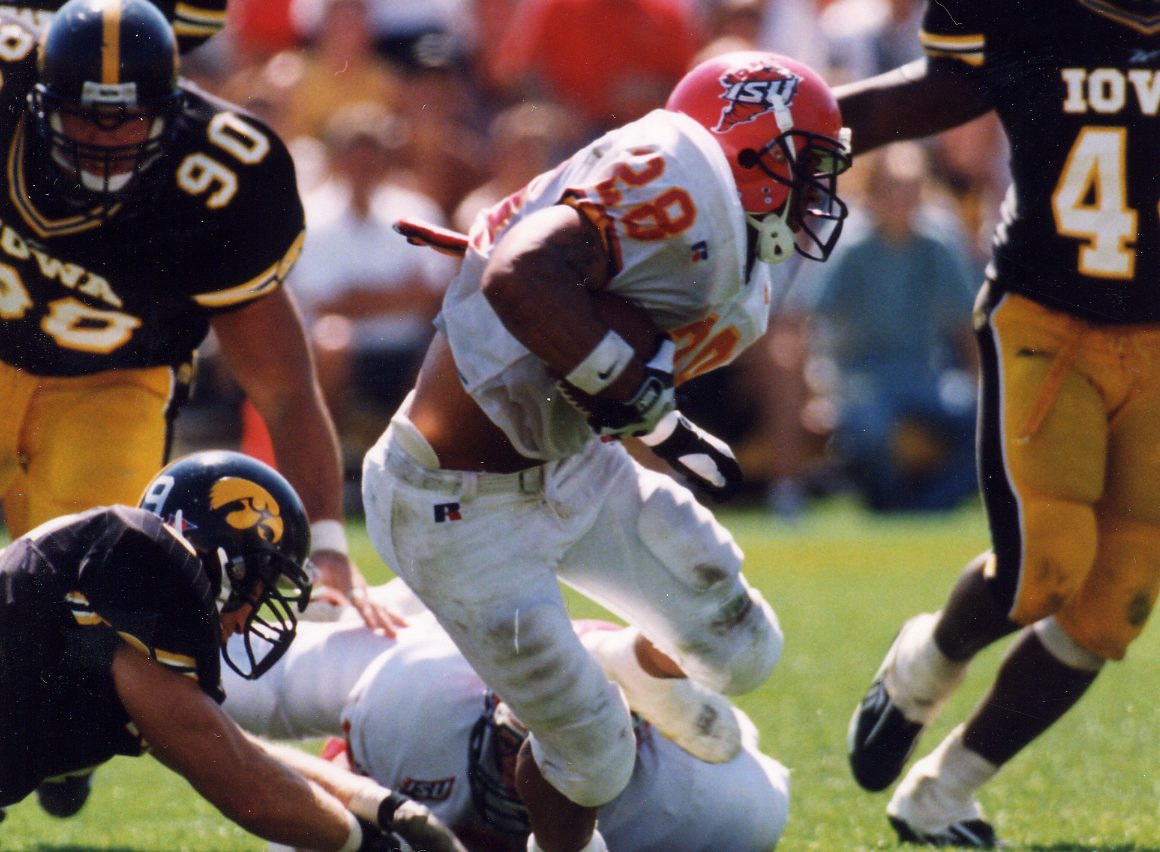 Darren Davis gashed Iowa for 244 yards in the Cyclones’ 27-9 upset win in 1998 at Kinnick Stadium that ended a 15-game ISU skid in the series. (Photo courtesy ISU Athletics Communications)

Dan McCarney gingerly cupped the can his wife Margy procured from a local beautician, pressed spray and winced.

A plume of gold dusted his brown hair, fixing itself around his now-frosted follicles.

Not a great look, McCarney concluded. But damn, it felt good.

A promise is a promise — and his color-based pledge flowed from a monumental shift in the Cy-Hawk Series.

It also summoned joyful hoots and hollers from his suddenly-resurgent Cyclone players the Sunday after breaking a 15-year losing skid against the Hayden Fry-led Hawkeyes.

“I walked into the team meeting and they went nuts,” said McCarney, who 20 years ago shocked Iowa in Kinnick Stadium 27-9 to end that ignominious streak. “The roof came off of the ol’ Jacobson Building. A lot of fun, a lot of laughs.”

Twelve lather-rinse-repeat patterns eventually got rid of the gold, which McCarney had agreed to bathe his hair in at the urging of Jeff Waters and Jamarcus Powers, who had adopted the look on a more permanent basis.

But he’d only do it if ISU could beat Iowa — a possibility few, if any, people outside of that building believed could happen.

“Well, you hope and figure, they’re not going to remember that,” McCarney said of the gleaming bet.

Losing — and losing badly — to the Hawkeyes had become a foregone and forlorn conclusion.

Until 1998, when everything changed and the balance of power shifted. the Cyclones would win five straight in the series as the Fry era gave way to the one still headed by Kirk Ferentz.

Since the McCarney-led breakthrough 20 years ago, the series is tied, 10-10. Perceptions have changed. Competitiveness is expected — by Vegas, which tabbed Iowa as a four-point favorite for Saturday’s 4 p.m. Iowa Corn Cy-Hawk Series game, and fans, as well.

“Since I got back in ’99, there’s been a lot of really good ballgames that have gone right down to the wire, and I think that’s good for everybody,” Ferentz told reporters during a Tuesday news conference. “No question about it. I know there’s a perception out there at one point we didn’t think this was important. That was highly insulting, really insulting. But you know, you can’t do anything about it. You go through all that stuff like you go through anything else.”

But no one went through what Iowa State went through, which bled into the first three years of the McCarney era.

The Cyclones had not only lost 15 straight to Iowa. They’d failed to win 31 consecutive road games, as noted in the 1998 Des Moines Register game story by veteran reporter Randy Peterson.

Oh, and they were coming off a loss to then “lowly” TCU at home, so very few saw ISU’s dominance at Kinnick that day coming.

The Cyclones didn’t care about the outside noise (and laughter and derision). In fact, special teams star Kevin Wilson outright predicted he’d block a punt in the game — and he did, setting the stage for the first Darren Davis touchdown that put ISU in front to stay.

“To me, one of the biggest plays in the turnaround of the rivalry in the Iowa State-Iowa series was blocking that punt against Iowa in 1998 after 15 years of getting your ass kicked up between your shoulder blades,” McCarney said.

Davis rushed for 244 yards. The game was never even close. It was a “Cyclone State” for the first time since 1982 and it’s been a back-and-forth series ever since.

“We had all the energy on that football field,” said former ISU and NFL quarterback Sage Rosenfels, who would start and win the next two Cy-Hawk games in 1999 and 2000. “We would not be denied once we knew we could play with them and I think they were almost shocked because it had become so expected for Iowa just to blow out Iowa State.”

Everything had been building to this point. McCarney, Rosenfels said, had arrived from Wisconsin’s staff three years earlier. He brought with him the Badgers’ blue-collar approach to winning in the trenches, where building tough, deep lines coincided with grooming top-flight tailbacks. The Cyclones owned the line of scrimmage that day. It’s how they won the game.

“That was a long string,” said former ISU assistant and recently retired NFL coach Steve Loney, who had just left for a position at Minnesota and heard the welcome news of the upset while he prepared to help the Gophers face off with Houston. “That got to be a bitter pill to swallow every year, but you knew with what Mac was doing it was a matter of time.”

The same held true for third-year ISU coach Matt Campbell. One of the lowest points of year one was a 42-3 rout in Iowa City that could have been worse. His team seemed listless. The passion that would develop and pulsate through last season’s success didn’t yet exist, but the lessons learned helped form its now-strong foundation.

“We got handed a lesson of culture and attitude and effort when we went up there two years ago, in my opinion,” said Campbell, whose team also learned a lot after last season’s 44-41 overtime loss to the Hawkeyes. “I thought it was an invaluable learning lesson for what you want your program to look like and be with great consistency. So from our end, it was humbling and I think we were able to take a lot of those lessons learned in that game — especially the young guys in our program. The guys like David Montgomery, that played in that game, and some of those guys that were forced to play maybe at a young age and really felt the wrath of going up there and maybe not having the background of — and I’ve said that going into that year, period, of doing the little things when you need to do them, because when you get into the heat of the moment and you’re not prepared, you’re going to get exposed and at that time we certainly got exposed. So I think it was a great learning lesson and a lot that we draw back on, not only that game but the early part of that season, for our entire program of making sure we don’t go back there and we continue to move forward.”

That’s what McCarney’s Cyclones did in 1998. They went on to win a total of just three games, then four in 1999 and a program-record nine in 2000. Belief had become reality. Faith had melded with fact.

It all started with the monumental triumph in Iowa City no one expected except the guys who would achieve it.

“It was all part of confidence, I think,” McCarney said. “Obviously not arrogance. But I remember telling the team, ‘Look, there’s a maximum (rule) on how many guys can travel when you go on road trips. There’s never a minimum. The bottom line is, I don’t want to take guys just to joyride. I don’t want to take guys over there just to be cheerleaders. If you really believe we can go win this game, then get your ass on the bus. If not, stay home. I only want guys going over there that believe we can win it because I know in my heart and in my soul, I really believe we’re prepared to go win this game.’ So I think the mindset was we really could get this thing done.”

McCarney said it’s “shocking” 1998 is now 20 years in the past. And it is. Any Cyclone or Hawkeye fan born since then has grown accustomed to an actual rivalry, not one that existed in name only.

Iowa’s won four of the past five meetings, but no one enters the game thinking there’s anything resembling a lock on tap, thanks in part to the 1998 upheaval.

“It’s hard not to feel the energy of this rivalry from the day you step on campus here,” ISU receiver Deshaunte Jones said.

So don’t expect any hairspray or hope-based side wagers to add color to this rendition of the Cy-Hawk game — but there was one more promise made by McCarney before the ’98 win.

Until getting the puppy hinged on beating Iowa. Then it became, ‘Yes, yes, yes’ — if it indeed did happen.

“I said sure, we go beat the Hawks over there, We’ll get a puppy dog,’” McCarney relented. “So the game’s over and everybody’s going berserk and my kids are going crazy and they’re yelling and screaming, We get a puppy dog! We get a puppy dog! Well, that was Boomer. We got a big, white lab. And Boomer lived 15 years. So we break a 15-year losing streak and we get Boomer and he ends up living 15 years which is pretty ironic, pretty cool, and then we got Molly the next year and after that, I said, ‘Listen. I’m not going to get a dog every time we beat Iowa.”

It’s a real rivalry now, as it should be.

“McCarney was a great seller of faith, hope and belief,” Rosenfels said. “And we were definitely buying.” 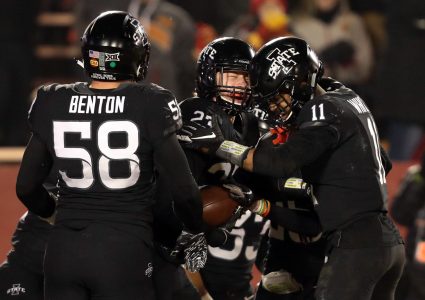