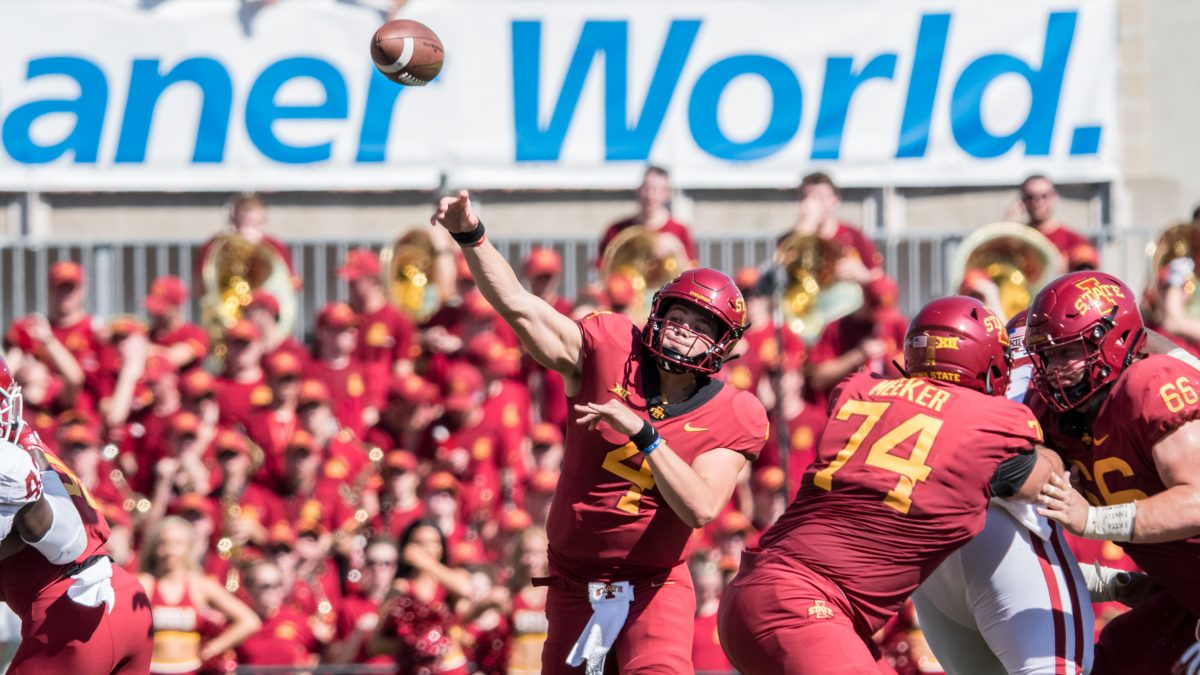 AMES — Even when it comes to routines, ISU quarterback Zeb Noland takes the long view.

He’s not big on pregame routines — no matter that his second career start came in Saturday’s 37-27 Big 12 season-opening loss to fifth-ranked Oklahoma.

His football life is built on daily practices. No nonsense. No quirks.

“I have like a weekly routine of how I stay calm and how I stay even-keel,” said Noland, who completed 25 of 36 passes for 360 yards (all career highs) as the Cyclones fell to 0-2 overall Saturday before a crowd of 58,479 at Jack Trice Stadium. “I start on — right now. The game’s over. You can’t let the highs or lows of a win or a loss affect you. You’ve just gotta go to work tomorrow and take your mistakes, push them to the side and learn from ‘em. Just keep moving and keep getting better.”

ISU certainly did both of those things after absorbing some hard knocks in last week’s 13-3 loss at Iowa.

Noland relieved injured starter Kyle Kempt (MCL) late in that setback, then spent this week cooly and methodically preparing for the athletic Sooners (3-0, 1-0 Big 12). Kempt, Cyclones coach Matt Campbell said, will be out at least next week, as well, which means Noland will follow his same mundane, but vital day-to-day plot points toward next weekend’s home game against Akron.

“Zeb didn’t surprise me by the way he played,” said Cyclones star tailback David Montgomery, who rushed for 82 yards and a touchdown that pulled ISU within seven at 31-24 midway through the third quarter. “Zeb is very poised. He really stressed this week knowing his job and doing only his job and that’s being a general. He didn’t try to do too much and he didn’t try to do too little. So just getting that out of him was definitely a success in our offense.”

The very first play from scrimmage, Noland dialed up Butler in single coverage — and the Cyclones’ top receiver bolted by, then bounced off, defenders for a highlight reel-worthy touchdown that tied the game at 10-10.

“It’s a great feeling,” Noland said of seeing the 6-foot-6 Butler locked in single man coverage. “Every quarterback’s got their guy. He’s got two guys. But your eyes light up and you’ve just got to stay calm in those situations so you can make the right throw and make the right ball because you don’t want to overthrow him or under throw him. You’ve just got to give him a chance to catch the ball.”

Noland gave the offense opportunities all day, as did a markedly improved offensive line, which saw Colin Newell make his first start at center and Julian Good-Jones line up at left tackle.

“He had a great game,” Campbell said of Noland. “He played really well, I thought made great decisions – even at the end (with a last minute interception), that’s not his fault. He was pressured and he tried to make a play. I’m really proud of him and he’s done what we’ve seen Zeb do, quite honestly. Every opportunity he’s gotten, he’s taken advantage of it, so that’s great for Zeb.”

ISU never led against the heavily-favored Sooners, but Noland connected with eight different receivers. Three of his throws spanned 37 or more yards, including two of 50-plus to Butler, who finished with a career high 174 yards through the air.

“It was just game plan stuff. We just executed,” said Butler, who matched a single-game career-high with two touchdowns. “Zeb had a nice (pass) and from there it was just on me.”

Turning a pair losses into a string of wins is on all of them, of course.

The Cyclones achieved a strong measure of success on offense Saturday after sputtering against the Hawkeyes, and expect more to come.

“We know that our preparation is gonna pay off in the end and if we just keep working, keep chipping away, that we’re gonna have a chance,” Noland said.