Iowa State’s nearly five-decade-long streak without a first-round pick in the NFL Draft could be coming to an end in 2019 — at least according to SB Nation.

The site’s Dan Kadar has included Iowa State running back David Montgomery as the No. 30 pick to the Pittsburgh Steelers (his round order is based on odds from Westgate Sportsbook, for what it’s worth) in his initial 2019 NFL mock draft. If Montgomery does end up as a first-round selection, he will be the first Cyclone taken in the NFL Draft’s initial round since George Amundson in 1973.

“The drama surrounding Le’Veon Bell in Pittsburgh isn’t going away. In Montgomery the Steelers may see a running back who can do some of the same things as Bell,” Kadar wrote. “At Iowa State last season he had 1,094 yards rushing and 35 receptions for 288 yards.”

Montgomery, who was a first-team All-Big 12 selection last season, would not only be the first Cyclone taken in the first round of the draft since 1973, but the first Iowa State product taken at all in the NFL Draft since Jeremiah George in 2014.

Entering last weekend, that second streak seemed like a no-brainer to be broken, but Allen Lazard‘s inexplicable undrafted status teaches us anything can happen when it comes to the NFL’s biggest weekend in April. With that said, if Montgomery follows his stellar sophomore season with an even better junior year, he’ll be an even bigger lock to be drafted than Lazard ever was during his time in cardinal and gold. 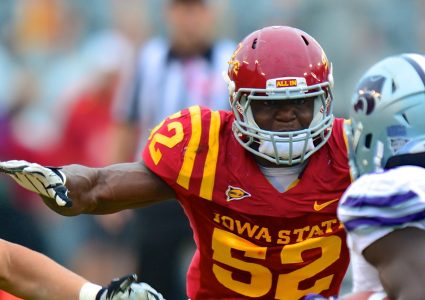