AMES — “We’ve got guys who got black-and-gold ‘singletitus.’ I get it. I wore one and I saw guys crumble because of the color of singlet I was wearing.”

Those were the bold words of  head coach Kevin Dresser following Sunday’s humbling 35-6 loss to No. 7 Iowa, which was one of Iowa State’s weakest performances of the season. There was little to no fight in a good number of the matchups.

The Cyclones only managed to gather one takedown in the entire dual.

Without a lot of positives – if any – from Sunday – where does the team go from here?

Iowa State only scored six team points because Iowa made a game time  decision to scratch its 197-pounder, Cash Wilcke. Hawkeye head man Tom Brands said Wilcke wasn’t feeling well and it was better for the team if he forfieted after being weighed in.

Dresser had some strong feelings on that decision saying it was “a chicken blank move”.

“The day will come when we even the score and this will be a dual meet,” said Dresser.

Looking to the immediate future, the Cyclones have 10 days in the wrestling room to prepare themselves to compete at the Big 12 championship. That will hopefully come with different results than this disappointing Sunday.

In late October, when Dresser met for media days before the first dual of the season he said, “We want to win now but we’re also realistic. We know what lies in front of us, this isn’t a 100 yard dash, if we’re going to build a solid, long-term program.”

WRESTLING: Why the UNI loss wasn’t all bad for the Cyclones 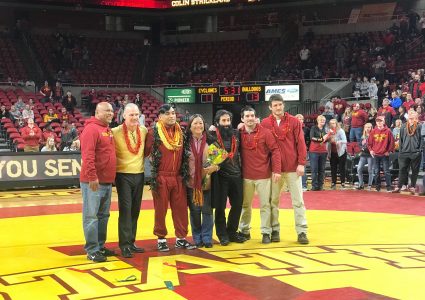