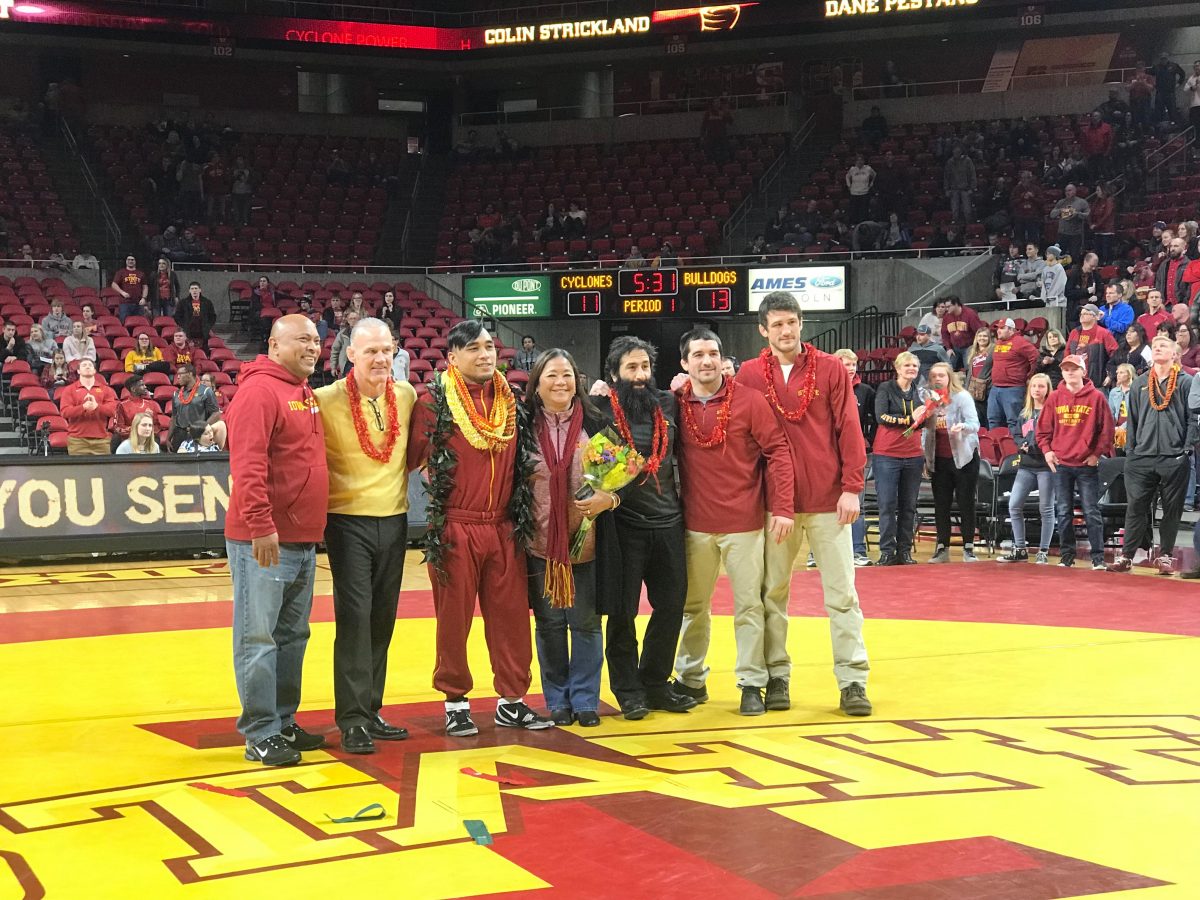 AMES — Iowa State added another comeback win to its resume with a 26-22 victory over Fresno State on Friday night.

“Tonight was exciting. Nobody wanted to leave early,” said head coach Kevin Dresser in his post-dual press conference. “Really shows progress in the mentality of the team.”

The win was proof that Iowa State has grown tremendously in a short amount of time.

At the beginning of the season, every loss seemed to come from the lack of bonus points. Iowa State’s comebacks this season have notably been because them.

Although the night ended in a win, Dresser, as usual, wasn’t shy to acknowledge there is still some work to be done.

Redshirt junior Marcus Harrington won his match 6-4 but it was not with the usual grace we see from the heavyweight. What turned into a sudden victory, Harrington was able to find the energy it seemed he had lost during the the last two periods and got the takedown in overtime.

“I was able to secure the win, another win for the team,” said Harrington. “I can definitely tell you that you’ll probably see more out of me tomorrow in Cedar Falls.”

The match-up of the night was at 149 with redshirt freshmen Jarrett Degen taking on Khristian Olivas. Degen ended up losing, 15-14.

What made this one tough to handle was the fact that Degen was seconds away from earning a riding time point to help secure a sudden victory. Degen has tough offense and does not go down easily but his defense is what lacked.

“Don’t you love that guys effort in terms of fight?” said Dresser. “He’s an example. He would pop his own head off before getting pinned.”

Dresser didn’t go without saying that Degen needs to figure out how to get better defense and slow his guys down and trying to focus on putting more effort in the first period as he is seen doing in the second and third.

Senior night for senior Dane Pestano ended on a high note. Although Pestano still has two matches left in Hilton Coliseum, this one was bitter sweet for him.

“Good pinners, pin slow because they have to keep pressure,” said Dresser.

Happy senior night for Dane Pestano! Gets the pin at the buzzer! pic.twitter.com/R7lObModyQ

In what seemed to be heading towards a major decision, something clicked and Pestano felt the chance in his opponent to go for the pin.

As tradition follows, Pestano’s family brought leis with them in honor of senior night, something they’ve done every year. Pestano being from Waimanalo, Hawaii explained that when something is celebrated leis are passed out. This year, Pestano got his own.

When being asked what led him so far from home, Pestano started with definitely not the weather.

“At the time, the coaches, Kevin Jackson, who wouldn’t want to wrestle for him?” said Pestano. “The tradition here, so rich in tradition and so much grace came out of here. Just glad to be here.”