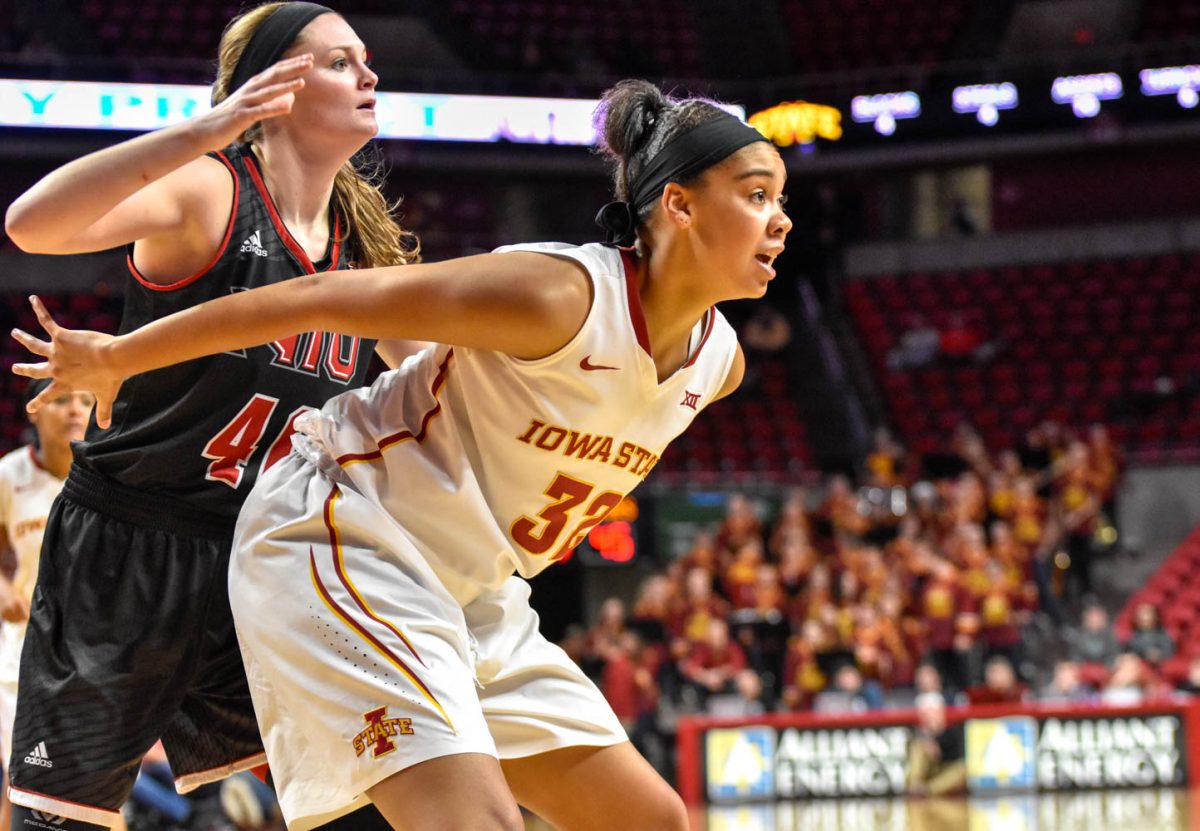 MANHATTAN, Kansas – A huge performance by Adriana Camber and Meredith Burkhall led Iowa State (10-13, 4-8 Big 12) to an 80-45 win over Kansas State (12-11, 4-8 Big 12) Saturday night at Bramlage Coliseum. The sophomore Swede’s career-high 21 points and Burkhall’s double-double guided ISU’s first win in the Little Apple since 2015 and largest win ever at K-State.

A dominant first quarter saw the Cyclones build a 14-point lead, but the advantage was reeled down to four in the second quarter. The difference came via a 13-0 Iowa State run across the end of the first half and start of the second half to push Iowa State comfortably back ahead.

The Cyclone offense was clicking from the tip, as the visitors hit six of their first nine shot attempts which included three 3-pointers, to push ahead 17-7. It was an all-around strong first quarter for Iowa State. Along with hitting five 3-pointers, ISU controlled the rebounding edge 10-to-6, and got seven assists on nine made baskets to build a 25-13 first-period edge.

ISU made it a 14-point lead on the first possession of the second half, but the offense hit a wall with seven-straight missed shots. K-State took advantage to get back into the contest, going on a 12-3 run to bring the Cyclone advantage down to 33-29. Adriana Camber was the star for ISU in the second, as the Swede got 10 of ISU’s 13 points, including the final seven to help push Iowa State’s lead back to nine at 38-29 at the break.

The momentum continued into the second half, as ISU nailed the first eight points of the third quarter to open up a 46-29 lead. K-State slumped to a 15 percent (3-of-20) shooting performance in the third, which allowed ISU to pile up its lead to as many as 23 points.

The Cyclones continued to click late in the contest, as the lead reached 35 points in the final quarter of action.

Adriana Camber showed all-around versatility in her offense to be a threat all over the court for the Cyclones. Camber’s career-high 21 points included five 3-pointers. She also posted six rebounds.

Meredith Burkhall had one of the best games of her Cyclone career. The first half saw her grab 11 rebounds, but she showed her stuff on the offensive end in the second half, getting 16 of her career-high tying 20 points in the second half.

Madison Wise posted 17 points which included a perfect 5-for-5 night from 3-point range.

*Iowa State has hit a 3-pointer in an NCAA-record 727 games.

*The Cyclones hit a season-high 15 3-pointers, their eighth game of the season with at least 10 3-pointers.

*Madison Wise recorded 17 points. It was her ninth game of the season in double figures.

*Adriana Camber posted a career-high 21 points, her previous best was 16 points at Drake in November. Saturday was Camber’s fifth game in double figures this season and sixth of her career.

*Bridget Carleton finished with 11 points. She has been in double figures in all 23 ISU games this season.

*Meredith Burkhall finished with a double-double of 20 points and 13 rebounds, her fourth career double-double.

*Burkhall tied her career-high with 20 points, which she also got against Kansas last season. She has scored in double figures four times this season and 28 times in her career.

*Burkhall grabbed a career-best 13 rebounds, the seventh time she has gotten at least 10 boards in her Cyclone tenure.

Iowa State has a mid-week bye next week, and will be off until next Saturday when the Cyclones host No. 23 Oklahoma State at 6:30 p.m. inside Hilton Coliseum. The game will be televised on Cyclones.TV Powered by Mediacom. The game against the Cowgirls will be ISU’s “Pink Out” game for breast cancer awareness, fans are encouraged to wear pink to the game.