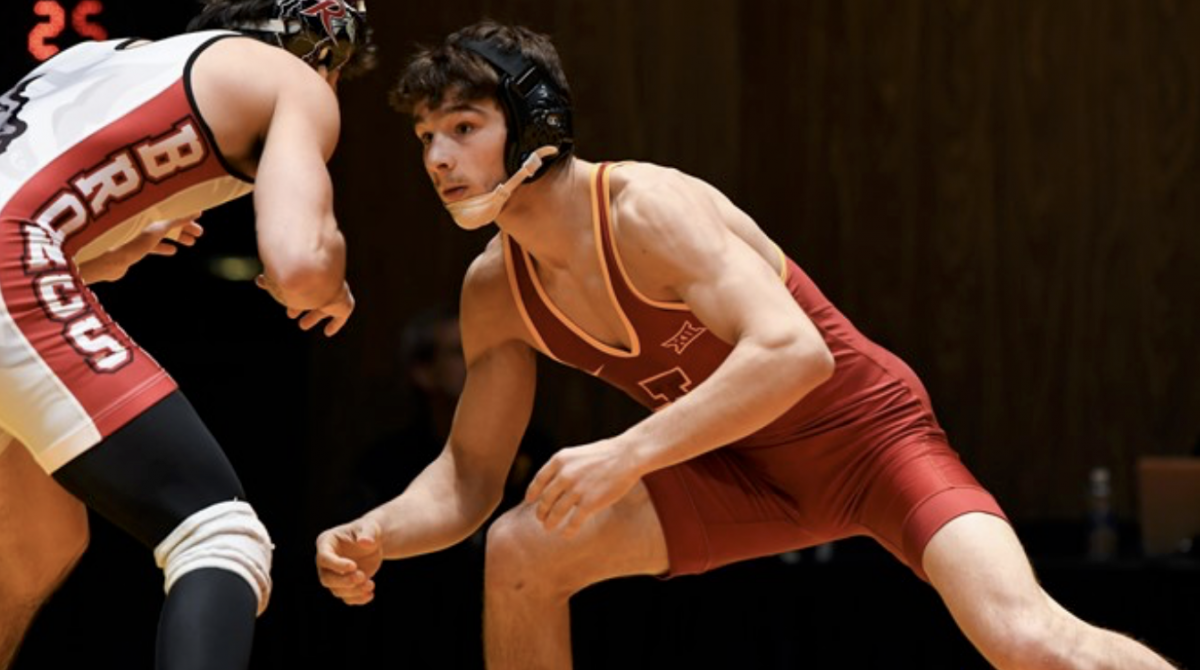 AMES —Freshman Ian Parker is realizing his bright future at 141-pounds for the Cyclones.

Parker added a huge shot of success to his short career last weekend with an upset victory over Oklahoma State’s two-time defending NCAA champion Dean Heil. That was in addition to another upset over Oklahoma’s three-time national qualifier Mike Longo on Friday.

On Wednesday, Parker was named Wrestler of the Week by the Big 12.

“He definitely proved he’s capable. The sky’s the limit,” head coach Kevin Dresser said. “He needs to be wrestling for titles before he leaves Ames.”

A Cyclone has not held this honor since Feb. 1, 2016 when Lelund Weatherspoon earned the award.

“I felt I was going to be a better wrestler at 141 and it’s more of my natural weight and the coaches agreed with me and that was exciting,” said Parker.

Assistant coach Mike Zadick mentioned in his press conference earlier this week that it had been over 10 years since the Iowa State wrestling program was able to knock off a national champion, something Parker was able to do with ease in his debut at 141.

“It’s not just his ability, it’s a mental thing that the team will feed off of as far as, you don’t just go get lucky and knock off a two-time national champion,” said Zadick. “There has to be an unbelievable strong mind when you step on the mat, that you believe in yourself and your ability and what you’ve been doing.”

When asked how much weight Parker was having to cut to make 133 work, he simply said, “too much.”

“I felt completely drained and tired of cutting weight all the time and not being able to put enough stuff back in my body, 141 felt normal and amazing,” said Parker.

Keep in mind that Parker’s resume at 133 was still successful by posting wins over No. 10 Auston DeSanto of Drexel and No. 19 Ali Naser of Arizona State.

Parker is now looking at a clean slate where all of the energy that was once being put into making weight, can now be used for training and accessing his full potential.

“He’s probably the best guy for the weight,” said Zadick. “It’s not like there was a step back for us, it was a new and improved and we continue to build off that.”

Dresser then gave Parker the ultimate compliment, calling him a poster boy for what he wants to see out of the rest of his team.

“Leadership can happen one or two ways: It can be verbal or it can be visual. He’s a visual leader,” Dresser said. “He doesn’t need to say anything and that’s the best part of this sport, if you can go out and do what he does everyday you don’t even need to open your mouth.”