Full disclosure: Prior to the 2016 Iowa State football season, I was actually more excited to see then-freshman running back Kene Nwangwu than I was David Montgomery.

It seems crazy now when you consider that David “Beast Mode” Montgomery will enter the 2018 college football season as one of the top backs in the sport, but those inside of Iowa State raved about Nwangwu that entire summer leading up to Matt Campbell’s debut season as well.

As a true freshman, Nwangwu didn’t have as many opportunities as his more powerful counterpart, but we all saw the burst. Nwangwu ranked second in the Big 12 and 15th nationally in kick return average at 26.4. Pro Football Focus named him to its First-Team Freshman All-American roster.

It was last February during winter workouts when the explosive Nwangwu tore his Achilles Tendon. Truth be told, he probably could have played in the second half of 2017 but Campbell did what was best for the athlete and allowed Nwangwu to not only completely recover, but grow as a running back during what turned out to be a very beneficial redshirt season.

“Some people get injured and that stunts their growth,” Campbell said. “It was a situation where my message to him was, ‘Can you better yourself?’ What were some of the things that he can’t do in running? We know that he will be back with the speed but how does he get better now through this seven to eight month rehab process in terms of catching the football and running the offensive scheme and all of those things. I think we will see a really dynamic football player.”

Montgomery ran for 1,146 yards and 11 touchdowns as a sophomore in 2017. Former Campbell running back (at Toledo) Kareem Hunt led the NFL in rushing this regular season for the Kansas City Chiefs.

“He is one of the most explosive players we have ever had,” Campbell said. “I would be lying to say that we didn’t miss him this year, because we did. Talk about elite speed….He’s an elite kick returner.”

That is really saying something for a guy who only has 27 career rushing attempts to his name. To top it all off, Campbell said that Nwangwu’s grade point average (he’s an engineering major) last semester was 3.9.

Nwangwu’s return to the field in 2018 is just one piece of what will be an absolutely loaded group of running backs that Campbell and offensive coordinator Tom Manning will have to work with.

In addition to Montgomery and Nwangwu, proven players like Sheldon Croney and Mike Warren will be in the mix. And don’t forget about the shifty freshman Johnnie Lang, who redshirted the 2017 season.

If Iowa State can get more production out of its offensive line, the Cyclones could very well have one of the best running games in college football next season. 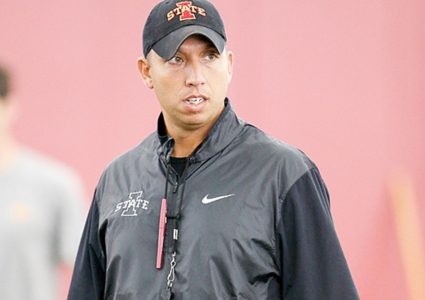