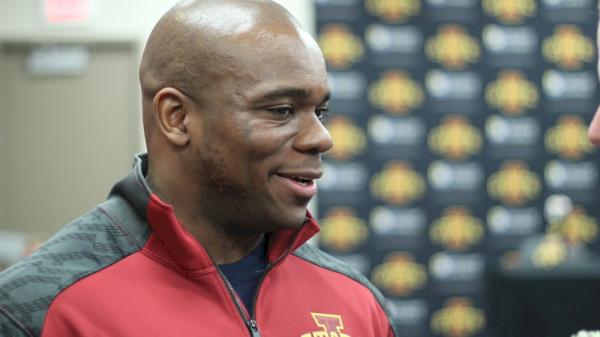 I did not see this coming.

It was early Sunday afternoon when Yahoo Sports first reported that Iowa State running backs coach (and associate head coach) Louis Ayeni would leave Ames for a similar job at his alma-mater – Northwestern – where he played from 1999-2003.

Ayeni, who first came to Iowa State alongside Mark Mangino of all people in 2014 (under Paul Rhoads), is as popular of a behind-the-scenes assistant as I have ever seen in Ames. I’m talking athletics department wide. He is a truly genuine guy who even when things were low, always had a smile on his face.

Source: Louis Ayeni will be the new running backs coach at Northwestern. He’d been at Iowa State and coached Kareem Hunt at Toledo.

Ayeni told The Des Moines Register he is leaving to follow a dream of coaching at his alma-mater. It’s tough to fault a guy for that. It’s still surprising though when you consider that David Montgomery is coming back for his junior year – not to mention the rest of his loaded group of tailbacks.

It is no doubt a loss for the Cyclones. Dating back to Mike Warren’s freshman year, just look at Iowa State’s production from the running back position over the last three seasons. This guy can coach.

Sunday’s news is also simply part of the evolution of an ascending program. When you win, other programs want your guys. Lou’s a good one. I’ve thought for a while that he would be Iowa State’s next offensive coordinator – assuming that Tom Manning would move on (as most successful coordinators do) at some point in time.

The good news here is that Iowa State’s running backs room is absolutely loaded. It will be one of the top units in the Big 12 next year and Matt Campbell – who is sitting on a fresh six-year contract with extra money to pay assistants – shouldn’t have a hard time convincing anybody to take this job.